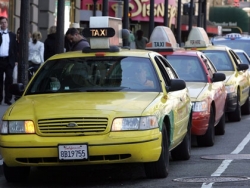 Around noon, about 100 cabs converged on City Hall honking their horns, while another 100 marched and waved signs.

One cab driver said when fares are tallied at the end of the day, money from the credit card fares are deposited into a bank account (minus the 5-percent fee per transaction). Then, they cannot access that money for between 24 to 48 hours. If they do, withdrawal fees often apply.  “It’s a hardship,” she said.

Cabbies don't like the new electronic system that tracks their tips, how much they get paid for each fare and where they go. And they don't they like the postponement of taxi meter increases.

Scores of drivers jammed into the MTA board meeting to protest the changes. They blame plans to install rear-seat video screens and credit card readers for the 5 percent surcharge.

"Cabbies shouldn't be charged 5-percent," Ruach Graffis, a driver for more than 20 years, told the SF Chronicle. "We don't have healthcare; we don't have retirement. And now MTA is allowing the companies to charge us 5-percent."

As the use of credit cards has escalated over the years, cab companies have had to eat the transaction costs. Last year, the DeSoto Cab Company stated it would no longer accept credit cards. MTA said it would sue DeSoto if it didn’t back down. In July, MTA allowed the cab companies to pass those costs on to the drivers.

Some SF cabbies have refused to accept credit cards even though they're legally required to accept them.

In one instance, filmed by a passsenger, a taxi driver told the passenger to get out of her cab because she would not accept his credit card. The incident escalated as the rider repeatedly asked the driver for her driver number, and the driver wearily asked him to leave the cab. He continued to ask for her medallion number. Finally, getting the number, he still remained in the cab, repeatedly asking for her name. The passenger kept insisting: “Give me your name. Give me your name. Why don’t you give me your name?”

Drivers may be planning a full-day strike unless MTA comes up with a compromise. A possible fare increase and other issues won't be considered until the agency meets on August 2, the AP reported.