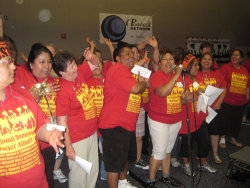 A Domestic Workers Rights bill is winding through California's Capitol.

This week the California Senate Labor and Industrial Relations Committee voted in favor (5-2) of a domestic rights bill, but some tough concessions have been made, including the removal of vacation and sick day provisions from the bill.

One former domestic worker told KPFA: “In this labor committee hearing we lost vacation days, but we understand not all workers have paid vacation days. But we also earlier lost sick days, so most of the workers were going to use vacation days for sick days.”

Even so, the historic bill would provide some basic labor protections for the state's estimated 200,000 domestic workers, which include nannies, caregivers and housekeepers.

Domestic workers, who are primarily immigrant women, are isolated and vulnerable to the whims of their employers. Workers are reluctant to complain to anyone about unfair pay, working more hours than they are paid, lack of breaks or sexual harassment, for fear of losing their jobs.

Many of the workers provide the main income in their families. According to a report released in 2007 “Behind Closed Doors,” 54 percent of the women interviewed were the main providers. In addition, 72 percent supported families in their country of origin.

The Domestic Workers Bill of Rights would give these workers leverage to be treated fairly by creating guidelines for employers of domestic workers.

The bill, sponsored by Asssembly member Tom Ammiano (D-San Francisco), now heads to the Senate Appropriations Committee for approval and after that, to the full senate.

“We are making progress. It was a six-year project in New York State. Hopefully our bill will get to the governor’s desk,” said Quintin Mecke, Ammiano's spokesman.

Currently, domestic workers are excluded from all rights provided to all other California workers under Wage Order 15 — wage and hour protections.

“(The) committee vote was a historic step forward for the rights of domestic workers in California. For decades domestic work has been excluded from both state and federal labor laws and worker exploitation in this industry has remained invisible and unmonitored. AB 889 will end that by establishing the same basic protections under the law that many of us take for granted,” Ammiano said.

Historically, domestic workers have been exempted from laws that protect other workers and guarantee certain standards—such as fair wages, a safe and healthy workplaces, worker compensation, meal and rest breaks, overtime wages.

Said Jessica Lehman, employer of a personal attendant in her home and a member of Hand in Hand: Domestic Employer Association: "Employers have a vested self-interest in this campaign by working to support the (bill). We are investing in building communication and trust with workers who support some of the most intimate parts of our lives, providing home care to people with disabilities and elders, or caring for our children and our homes."

The bill now goes to the fiscal committee, where it must also be approved before it goes to a final senate vote. It still needs to be signed into law by governor Jerry Brown, who recently vetoed a farm workers labor bill.

The domestic workers bill has received wide support from labor rights coalitions across the state.

There has been international attention to domestic workers rights as well. On June 16, the International Labor Conference in Geneva, Switzerland, passed a convention recognizing domestic work as “work.”