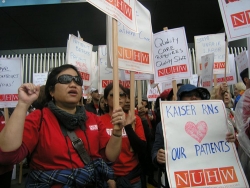 Members of the National Union of Healthcare Workers protest Kaiser Permante on May 27 in Los Angeles.   (Photo via Kaiser United )

On a conference call with union staffers and SEIU supporters at Kaiser earlier this week, Regan sounded a lot less thrilled. And for good reason. On Monday, July 18, a National Labor Relations Board (NLRB) hearing officer found evidence of election misconduct by SEIU and Kaiser—presented by NUHW—was very relevant to her determination of whether the largest NLRB vote in 70 years should be overturned.

In a strongly-worded 34-page rebuke, federal Administrative Law Judge Lana H. Parke ruled that collusion between Kaiser and its largest union so “interfered with employees’ exercise of a free and reasoned choice” that a new election must be held. In particular, Parke cited the impact of management in unfair labor practices in several smaller Kaiser bargaining units where workers voted to leave SEIU and join NUHW prior to the September-October 2010 election in a statewide unit of service and technical employees.

Kaiser subsequently punished those 2,300 nurses and other professional employees for switching unions by withholding scheduled raises and other benefits. As reported in my new book about “labor’s civil wars” at Kaiser and elsewhere, the giant HMO violated the National Labor Relations Act in such egregious fashion that the NLRB sought a rare “10(j) injunction” to enforce the NLRA. The resulting federal court order compelled management to provide $2 million in back pay and interest to the affected workers, who remain locked in difficult negotiations on their first NUHW contract with Kaiser.

As Parke noted, “Kaiser’s ULPs [unfair labor practices] figured as silent, menacing reminders that Kaiser not only could, but already had, unilaterally withheld benefits when other employees had chosen to be represented by NUHW.”

Parke’s decision was unusual given the lopsided margin of SEIU’s victory last fall, a product of fear-mongering and far greater organizational resources. While the smaller Kaiser units that have switched unions have done so by large margins, the tally last fall was 18,290 for SEIU, 11,364 for NUHW, and 365 for no union.

Back in February 2009, support for NUHW was far greater. More than 25,000 Kaiser workers signed cards and petitions seeking an election to oust SEIU after then-SEIU President Andy Stern put Regan and Eliseo Medina in charge of their local union, United Healthcare Workers-West (UHW). Stern removed all of UHW’s elected leaders and fired or forced out several hundred staffers. (In the interests of full disclosure, I should note that one of my daughters was among them.)

Actual voting at Kaiser was then delayed for 20 months, enabling the UHW trusteeship, run by Regan and Medina, to remove hundreds of elected shop stewards and install appointed replacements. In the summer of 2010, the trustees negotiated a three-year wage agreement with Kaiser, with little membership mobilization or publicity—a contract that NUHW claimed would open the way for healthcare cost shifting and other concessions.

Meanwhile, KP management openly favored UHW/SEIU against NUHW, the new union formed in response to the trusteeship. The SEIU-dominated Labor-Management Partnership (LMP)—still much applauded by the AFL-CIO and Kaiser-funded academics--announced that NUHW was unwelcome to join, a blackballing decision that has made even more Kaiser workers wary about “partnering” with a repeat violator of the NLRA.

In Parke’s decision, she singled out Ben Chu, president of Kaiser’s southern California region, for interfering “with employees’ freedom of choice” by threatening the loss of benefits if workers changed unions—a management warning, delivered at a large employee meeting, that SEIU then “widely disseminated” prior to the vote last Fall.

In almost every NLRB election contest sought by NUHW (which has won bargaining rights for 8,500 workers so far), SEIU has generated procedural delays to improve its chances of winning. According to one participant, in Regan’s conference call discussion with UHW loyalists this week, the new UHW president predicted that SEIU could, if necessary, delay any re-match at Kaiser for another nine months to a year by appealing Parke’s decision.

NUHW attorney Jonathan Siegel predicted that SEIU would appeal but expressed confidence that “the ruling will stand, so we’re looking for a new election in 2012.” The parties have until July 28 to file exceptions to the ruling.

On UHW’s website, Regan claimed that “support for SEIU-UHW has only gotten stronger since last fall, especially since NUHW has failed to get a contract for the Kaiser workers they represent and faces major give-backs. If a new election is run, we will defeat them by a larger margin than last time.”

Lately, UHW-SEIU attempts to undermine NUHW have focused on the new union’s impressive and creative use of one-day strikes to back up its on-going bargaining at Kaiser and Salinas Valley Memorial Hospital. In UHW’s July 18 statement on Judge Parke’s decision, UHW derisively refers to the “small group of employees” NUHW represents (at Kaiser, they actually number about 4,000) and claims that “NUHW has twice gone on strike to no effect and called off a third strike due to lack of support by its members.”

NUHW organizers say the election decision will boost the morale of Kaiser workers who have voted to switch unions and rejuvenate their supporters who remain trapped in SEIU. On Regan’s conference call, some participants expressed concern that the post-election withdrawal of hundreds of out-of-state SEIU staffers sent into Kaiser facilities last fall left UHW dues payers feeling un-represented and abandoned. Their low morale might provide an opening for NUHW, assuming it can find a way to fund its own second campaign within Kaiser’s huge and far-flung service and technical unit.

In northern California, Kaiser call center worker Roy Chafee is among those NUHW activists who claim that, “since the election, SEIU pulled out almost all of its staff and support, leaving individual workers to fend for themselves.” At a small NUHW fundraiser in Los Angeles last week, among those attending was a disillusioned young Latino supporter of SEIU, who echoed Chafee’s complaint. This Kaiser worker, who drove several hours to get to the event, recently became critical of UHW after campaigning aggressively on its behalf during the election last fall. His defection was rewarded in the usual UHW fashion—removal as shop steward.

If NUHW and UHW-SEIU do face off again next year, their NLRB election competition could take place right in the middle of Barack Obama's re-election campaign. Just as in 2008, SEIU will be forced to divert many full-time staffers and millions of dollars in dues money to quelling membership dissent in California, instead of devoting all of its organizational attention to the presidential election.

Already, SEIU has failed to meet the national organizing goals it unveiled three years ago, because tens of millions of dollars were squandered on the take-over of UHW, and then SEIU’s resulting legal and organizing battles with NUHW.

Between 2006 and 2008—before labor civil warfare in California reached its peak—SEIU added 300,000 members or agency fee-payers to its ranks. At the union’s 2008 convention in Puerto Rico, Regan and other SEIU leaders declared that they were going to recruit another 500,000 by 2012, including 350,000 more healthcare workers. In 2009 and 2010, SEIU actual growth averaged only about 55,000 a year, an annual rate that falls far short of 2008 projections and is much lower than in the past.

When SEIU holds its 2012 convention, in Denver next spring, the cost of its counter-insurgency campaign in California will be hard to ignore—particularly if field commanders like Regan are simultaneously gearing up for another costly “surge” in response to Judge Parke’s ruling this week.

Steve Early is the author of The Civil Wars in U.S. Labor, which reports on the costly conflict between SEIU and NUHW in the California healthcare industry. For more information on the book, see www.civilwarsinlabor.org.