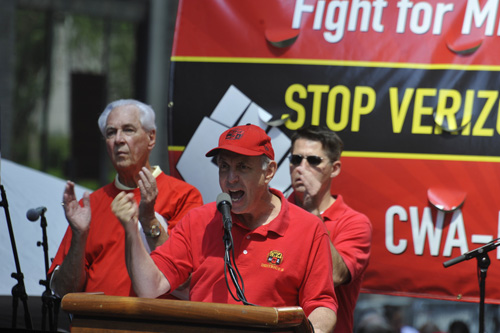 The culture of “no contract, no work” is almost extinct in the United States, where strike activity has reached an all-time low.

Among telephone workers in the northeast, at Verizon and AT&T, this union tradition remains strong, based on successful walkouts by the Communications Workers of America (CWA) and the International Brotherhood of Electrical Workers (IBEW) in 1983, 1986, 1989, 1998, 2000 and 2004.

In the longest of those struggles, 60,000 CWA and IBEW members struck for four months against healthcare cost shifting at NYNEX, the New York and New England company now known as Verizon (VZ). Only in 2003 did a regional bargaining unit—then 75,000 strong at VZ—stay on the job after contract expiration to avoid being ensnared in a carefully prepared management plan to replace thousands of strikers with contractors,.

On Saturday night, August 6, CWA and IBEW agreements expire in the same unit, now shrunk to 45,000 by buyouts, attrition, contracting out, job elimination and technological change, and the sale of Verizon operations in four states. In this round of bargaining, workers face unacceptable concessions and a tough decision about how to resist them most effectively.

In the words of CWA District 1 legislative/political director Robert Master, “Verizon has put on the table the most aggressive set of contract demands we’ve ever seen,” aimed at turning tens of thousands of secure jobs with good benefits “into lower-wage, much less secure jobs.”

Like General Electric, which just won givebacks from CWA and other unions, Verizon “isn’t under any financial stress,” according to The Wall Street Journal. The company reported $10.2 billion in profits in 2010 and its net income for the first half of this year was $6.9 billion. Over the past four years, Verizon earned nearly $20 billion for its shareholders (a record of profitably used to justify the $258 million spent on salaries, bonuses and stock options for just five of its top executives, including new CEO Lowell McAdam, during the same period).

And like GE, Verizon has pursued a systematic and long-term strategy of de-unionization. It has thwarted organizing at its fast-growing and hugely-profitable cellular subsidiary, Verizon Wireless, while steadily eliminating unionized jobs on the traditional landline side of its business.

The company now has 135,000 nonunion employees—and its unionized workforce is down to 30 percent of the total. In the current negotiations management seems determined to close the gap between the wage and benefit standards created through 70 years of collective bargaining and those implemented unilaterally at VZW and other nonunion divisions.

Verizon’s proposed takeaways focus on what it calls  “legacy” benefits. As a result of winning the NYNEX strike 22 years ago, CWA and IBEW members make no premium payments for individual or family coverage. According to VZ, “current average annual medical coverage” costs the firm nearly $14,000 a year—“twice the average for comparable companies in the eastern U.S. whose employees make contributions toward their healthcare.”

As management pointed out in a recent message to its “associates,” even “the CWA recently confirmed that 99 percent of companies now charge for family healthcare coverage.” Under Verizon’s proposal, this disparity would be corrected by forcing workers with dependents to pay $1,300 to $3,000 a year for family coverage.

Existing group pension coverage would be frozen and eliminated entirely for new hires, who would just be covered by 401(k) plans instead. Sick days would be limited to five per year, job security language gutted, raises tied to performance reviews, and more customer service reps put on commission pay. To add insult to injury, Verizon even wants to take away Veterans’ Day and Martin Luther King Day as paid holidays.

Not surprisingly, more than 90 percent of the workers polled by CWA and IBEW in recent weeks have voted to authorize a strike. Workplace mobilization activity—a long tradition among CWA and IBEW members in the region—has accelerated in recent weeks, after a later than usual official start. Ten thousand workers rallied at Verizon headquarters in New York City last Saturday and big crowds are expected in Philadelphia and Boston this Thursday evening (August 4) after work.

Thousands of rank-and-filers have signed up to become part of national union or locally initiated e-networks to share information about smaller-scale protests and expressions of workplace solidarity throughout the region. (See, for example, the very lively Facebook group set up by union stewards in New England under the name “We Are One! Ready to Strike at Verizon 2011 (IBEW-CWA).”

Many of the IBEW and CWA stewards most “ready to strike” (and with the most strike experience) are wary of any union response this weekend that falls short of an all-out work-stoppage. Yet a traditional strike could be a perilous exercise at Verizon, if it doesn’t have sufficient disruptive impact on the company’s operations. (In 1989, it took more than two months of picketing and other forms of pressure before NYNEX began feeling any noticeable pain—at a time when union members still represented a majority of the employer’s workforce.)

Over the past two decades, due to automation, VZ has developed far greater capacity to weather a conventional walkout by utilizing management personnel, and, most importantly, the parallel workforce provided by its 135,000 nonunion employees and extensive network of contract call centers. (Located in the United States and abroad, these centers are already diverting large amounts of bargaining unit work under “shared call” arrangements that the Verizon unions are trying to curb.)

Only one of the Verizon unions has a strike fund able to provide fixed weekly benefits for thousands of strikers. CWA’s $400 million fund was created after the NYNEX strike bankrupted its previous one; it pays $200 a week initially, and then $300 weekly, if a walkout continues. The IBEW has no mechanism for providing similar financial assistance or even COBRA subsidies if Verizon terminated health insurance as NYNEX did in 1989.

There is, however, a lower-risk, higher impact alternative available to Verizon activists. That is the strategy of working without a contract, while using  accompanying opportunities for direct action that would be both legally protected and disruptive.

In a letter sent last week to both unions, Verizon’s top negotiator opposed any contract extension. He warned that, "if we don't reach agreement by August 6th, the arbitration provisions of the various labor contracts would not be in effect for grievances that arise after the collective bargaining agreements expire” and, therefore, CWA and IBEW “will not be able to grieve and/or arbitrate any discipline, terminations or contract violations."

This was supposed to be a threat (which may soon include suspension of automatic dues deduction when the contract expires). But there is a little-noted upside to this post-expiration scenario—namely, that CWA and IBEW will no longer be bound by their promise not to strike over unresolved grievances during the life of the contract (or any extension of it).

When  CWA Local 1298 in Connecticut was faced with similar concession demands by AT&T in 2009, its 5,000 members worked without a contract for 18 months. Techs and service reps continued to mobilize on the job and in the community, union negotiators skillfully avoided bargaining to impasse, and Local 1298 won a series of NLRB cases challenging unilateral changes and disciplinary action that management tried to take against union activists.

Local negotiators were finally forced to accept some premium-sharing, based on the contract pattern already established elsewhere at AT&T in 2009. Meanwhile, 1,298 members and their families avoided paying several thousand dollars for their benefits during the long period when the old medical plan provisions remained in effect, while negotiations continued.

If Verizon continues to insist on cost-shifting and other givebacks, a CWA-IBEW decision to continue working would enable members to pursue the higher impact of strategy of striking selectively over unresolved grievances.

Any group of workers—in a single garage, call center, department or larger part of the bargaining unit—would be free to engage in carefully planned grievance strikes (of varying duration) after the third and final step of the contract grievance procedure, which remains in effect, has been exhausted.

These job actions would have to be unrelated to issues unresolved at the bargaining table. While most members continued to work and collect a full pay check, the unions would be free to escalate their anti-concessions campaign in public, building additional support from labor, consumer, and political allies around the country.

Fighting back in this fashion requires discipline, flexibility, creativity and a widely-shared rank-and-file understanding of why it's necessary. Staying on the job and using the right to strike over grievances throws the company a curve ball that management hasn't seen before. It minimizes the cost and risk of striking, while keeping the company guessing about what part of its operation might be affected next. It might even give Verizon greater incentive to settle than if everyone walks out together on August 7 and an army of replacement workers, already in place, is able to maintain customer service without little or no interruption.

Steve Early, a labor journalist and former CWA representative, was involved in organizing, bargaining, contract campaigns and strikes at Verizon (and its predecessor companies) from 1980 to 2007. He is the author, most recently, of The Civil Wars in U.S. Labor, which describes the 1989 struggle against healthcare cost shifting at NYNEX.