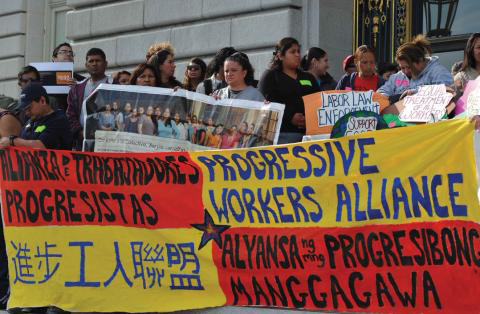 Wage theft is a national epidemic: It's estimated that $30 billion or more is stolen from U.S. workers every year by employers.

In San Francisco, the Board of Supervisors yesterday took a major step to prevent wage theft and protect low-wage workers by unanimously approving the Wage Theft Prevention Ordinance. Mayor Edwin Lee still has to sign it into law.

“While Washington was engaged in a manufactured crisis over the debt ceiling, workers and their advocates were working together with ethical businesses and government officials to make a real difference for working people and their families in San Francisco," stated  Kim Bobo, executive director of Interfaith Worker Justice.

Co-sponsored by Supervisors David Campos and Eric Mar, the ordinance, among other things, will slap stiffer penalties on employers who disregard the law and strengthen the ability of the city’s Office of Labor Standards and Enforcement to do its job.

The measure would do the following:

The Wage Theft Prevention Ordinance was drafted in partnership with the Progressive Workers Alliance, which launched the Campaign to End Wage Theft this past May.

Many victims of wage theft are recent immigrants who speak little English. They work in restaurants, as domestic workers, day laborers and the garment industry.

Many don’t know what the laws are, and even if they do they are reluctant to report for fear of losing their jobs.

But there are places that treat their workers well. For that, Young Workers United launched a “Dining With Justice” which lists of local businesses that treat workers fairly.

The Chinese Progressive Association conducted a study that found 76 percent of employees did not receive overtime pay when they worked more than 40 hours a week. Approximately half were not paid San Francisco’s minimum wage of $9.92 an hour.

Take, for instance, the case of a Chinatown restaurant being sued by the City of San Francisco for $440,000 in wages plus interest for seven employees.

Herrera said the case stands out even “among the most egregious perpetrators of wage theft in San Francisco. They paid wages well below the legal minimum, demanded long hours with no overtime, instructed workers to lie to labor investigators, and retaliated against those who sought to protect their rights."

An attorney for the Dick Lee Pastry owners claimed the workers lied.

Donna Levitt of the San Francisco Office of Labor Standard Enforcement, (OLSE) the agency in charge of overseeing claims of employers withholding wages, told the SF Bay Guardian that 500 claims of wage theft have been handled by the office since the minimum wage law was put in place in 2004.  The office has a staff of 16 to enforce labor law. Last year they received 81 complaints about wage theft.

Since the wage law, San Francisco has recovered nearly $4.4 million in back wages for workers according to OLSE.

Supervisor Campos told the Guardian: “The fact is that even though we have minimum wage laws in place, those laws are still being violated not only throughout the country, but here in San Francisco.”