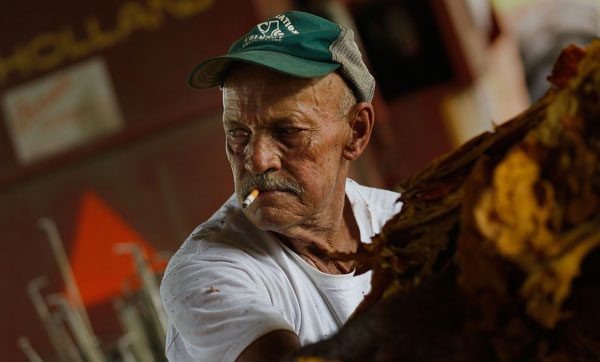 Few smokers probably think much about the route their tobacco takes to get to them, finely rolled and pristinely packaged, but nearly 100,000 farm workers go to North Carolina each year to harvest the tobacco crop. The crop accounts for more than half of all tobacco production in the U.S. and remains the leading field crop in North Carolina.

A recent report about these workers outlines the conditions under which they work. “State of Fear,” written in collaboration with the Farm Labor Organizing Committee and OXFAM, describes the unjust and inhumane conditions that exist for those tobacco workers, where they spend hours in the sun exposed to toxic chemicals and nicotine; many workers even absorb nicotine through their skin and suffer from nicotine poisoning.

The report found the need for a fundamental restructuring of the industry, which denies workers their most basic rights.

The Farm Labor Organizing Committee, a labor union affiliated with the AFL-CIO, began the study last year to investigate the industry in connection with the health and human rights of farm workers.

FLOC represents the Midwest and South, including 6,000 migrant farm workers in North Carolina.

The research was collected through interviews with farm workers, representatives from the government and NGOs that advocate for the workers. Interviewers visited more than 100 labor camps and spoke with hundreds of workers. The report states that two common themes emerged.

The first common theme is the deep sense of responsibility that makes the workers desperate to provide for their families, whether their families are in the camps or back in their home country.

The second common theme is a “strong sense of fear of arrest and deportation.” They are fearful of looking for any help with their situation, fearful of not being able to repay the smugglers who brought them into the country, fearful of the growers and of retaliation from the crew leader for not working fast enough, fearful of getting sick from tobacco or pesticide exposure, fearful of taking a break for water or bathroom use.

“There is nothing we can do. Nobody here complains because people don’t like to be retaliated against or fired, so they don’t say anything,” says Juan Martinez, a farm worker in Wilson County, N.C.

Nine out of every 10 farm workers in North Carolina are undocumented. “Their fears benefit all actors in the supply chain who are complicit” in the low wages, degrading treatment and inhumane conditions, the report states.

Ten tobacco companies were contacted to take part in the research. Two participated: Philip Morris, USA and Philip Morris, International. The report noted that while both companies have developed policies for good agricultural practices which set standards for labor management and farm safety, the companies have failed to include farm workers in standards development.

One in four farm workers reported earning less than federal minimum wage of $7.25 an hour. Over half the workers interviewed said their pay was not enough to meet their basic needs. The report found that workers did not feel free to join a union or collectively bargain for fear of being deported.

Pressured by supervisors to work faster, many workers said they were not given sufficient breaks or clean drinking water. There were several reports of pesticide-spraying taking place while they were working in the fields. More than one-third reported pesticide-related illnesses.

Green tobacco sickness afflicted a majority of the workers; the report says that growers failed to provide protective clothing such as gloves or “training that would have enabled them to take steps to protect themselves.”

The workers who lived in employer-provided housing described lack of decent living conditions, including no heating, leaky roofs, nonfunctional toilets and showers, no ventilation, worn out mattresses or none at all, inadequate cooking facilities, and rodent and insect infestation.

Wilson County farm worker Aparicio Rosales told researchers, “I think our housing is disgusting. Not everyone has a mattress to sleep on, and there are 10 men in one room. There are three showers, but only one works, and the same goes for the toilets. We don’t have a refrigerator or good ventilation.”

Results from a three-year study in seven states by the Northeast Center for Agricultural and Occupational Health finds the most common reason for injuries is due to inadequate protective gear, environmental exposure, weather conditions and bending/stopping.

NEC is charged with protecting workers in the three most dangerous industries in U.S. agriculture, forestry, and fishing. Although the program has been very successful, its funding is targeted for elimination in the president's 2012 budget.

The FLOC/OXFAM report corroborates NEC's findings. One worker told “State of Fear” researchers he has had “so many accidents” that what he earns doesn’t cover major medical costs. He recounts a fall that put him in the hospital. He said the work pace set by the boss doesn’t allow enough time to recover fully. “When my arm and hand were caught in the machine the doctor gave me two weeks off work. The boss only gave me two days, and that is how I was with all these ailments, even working with my hand bandaged. So they make you work almost by force.”

NEC observers wrote that for the first two weeks of July, workers have to reach high to cut the top of the growing plant, which is called “topping.” It begins early in the day before the heat starts, but because the plants are covered in dew, workers are wet in minutes. By late morning the plants produce sticky secretions which cover the workers’ clothes and skin. The sweat and tobacco juice drip and sting the eyes.

For the first picking, the worker must either sit or deeply bend to reach the leaves; for the second and third harvest, the worker must kneel for extended periods of time. Leaves are snapped and workers hold them underneath their arms where a sticky layer of juice collects.

Of those who reported back injuries, 52 percent were from bending or stooping.

Many chemicals are used on tobacco including fungicides, insecticides, herbicides and plant growth regulators. These chemicals can create a series of physical problems including dizziness, weakness and muscle twitching; some are associated with cancer and damage to neurological and reproductive systems such as Endosulfan, an insecticide.

“State of Fear” calls for an industry wide solution, including a respect for international human rights enforced at least as strictly as growers ensure the quality of their tobacco, and the creation of a council consisting of manufacturers, growers, farm workers and a chosen representative to ensure a safe and legal work environment.