Why I Chose to Get Arrested With 174 Occupy Chicago Protesters 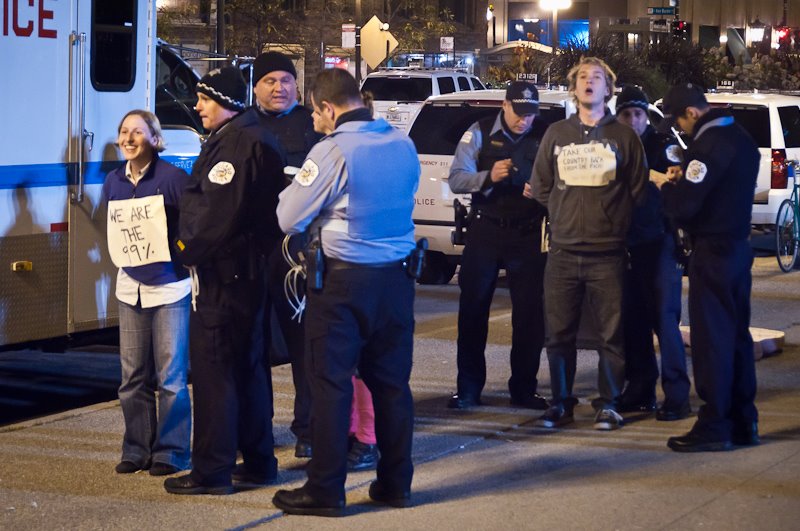 The Occupy movement and struggling workers want the same thing

CHICAGO—As I was ushered from a police wagon into a station on Chicago’s near South Side early Sunday morning—along with about 174 other protesters in zip-tie handcuffs who had refused to clear our belongings and ourselves from an Occupy Chicago encampment downtown—a Chicago Police Department officer told me to wait by an entrance while other activists had their cuffs cut off.

She paused to stare at the written message affixed to the front of my chest: “Take Our Country Back from the Rich—Take Back Chicago!” Her eyes scanned from my chest to my eyes, and she slowly nodded. “I can’t say nothin’,” she said, turning her head to glance at the other officers collecting protesters' belongings and leading them to a holding cell, “but…” She nodded again, silently communicating her agreement as another office patted me down.

Through similar gestures and words, it was a message we heard throughout Occupy Chicago protesters' short time in jail from a police force whose name is not exactly synonymous with sympathy toward protesters.

But it was a message that made sense. Cops are workers. Our arrests made sense to them because the Occupy movement is, at its heart, a labor struggle.

Most labor struggles, of course, don't see mass arrests of people of various ages, races, occupations and political orientations trying to camp out in a public park. They don't usually spread to cities and towns around the world with earnest but at times unfocused messaging. They don't usually involve puzzling hand signals and consensus-based decision-making and human echo chambers called "People's Mics." It's rare for them to even see arrests for civil disobedience, much less beatings and the use of pepper spray by police.

The Occupy movement doesn't look like a typical labor fight. But most of its various issues–unemployment, underemployment, jobs that don't pay enough for workers not to be up to their eyes in debt, the general sense that the overwhelming majority of the population has been vanquished by a small group of wealthy elites—are the same issues the labor movement has always struggled around.

The initial call from the Canadian magazine Adbusters to Occupy Wall Street stressed the need for a straightforward ultimatum: "democracy not corpotocracy." And, despite the baffled, absurd questions from pundits about what the heck this Occupy stuff is all about (as Glenn Greenwald recently asked, "Does anyone really not know what the basic message is of this protest?"), protests have largely stuck to this message: that the rich—the 1 percent, as the protesters have so geniously dubbed them—have hijacked our democracy and are lining their already bulging pockets with record amounts while the 99 percent are suffering, unable to meet their basic needs.

Variations of this message have been labor's cry since the movement's inception. Sometimes it has come from rank-and-file radicals, other times from over-paid communications consultants. But it has always been present.

Many of the other issues raised by protesters can be traced back to labor: Recent college graduates can't find work. People with graduate degrees are lucky if they can find jobs at minimum wage. Folks who used to think of themselves as "solidly middle class" are suddenly jobless and unable to make their mortgage payments. Public-sector workers like teachers are so demonized you'd think they were the originators of the credit default swaps and collateralized debt obligations that helped run our economy into the ground.

The demands so often come back to work: protesters want more work, and better work that provides for their needs. And they want workers' voices to be heard in a society that seems to only listen to the wealthy. It should be no surprise, then, that unions have resoundingly endorsed the Occupy protests on Wall Street and elsewhere: unions and occupiers are fighting for the same goals.

The week before Saturday's attempted occupation of Grant Park, I participated in a week of action with a coalition of community groups and unions called Take Back Chicago. (The organization I work for, Arise Chicago, is a member.) Throughout the week, we paid visits to bankers schmoozing at a gala, wealthy recipients of taxpayer city revenue originally designed to help develop blighted communities, and to Chicago's Bank of America headquarters. (The bank charges Chicago's public schools unjustly high interest rates.)

But almost every day, we ended up at Occupy Chicago, in front of the Chicago Board of Trade and the Chicago Federal Reserve, with union members and community activists and immigrants marching alongside out-of-work twentysomethings. On Tuesday, I watched an African-American union member recently laid-off after 15 years as a traffic aide downtown give a high-five to a young white Occupy protester with a somewhat irregular haircut.

"I'm so glad you all are here!" the occupier exclaimed.

"So am I!" the traffic aide responded.

I thought of that high-five as police made their final announcement after 1 a.m. on Sunday in Grant Park that those of us who would not leave would be arrested. I thought of the union members who talked about the young protesters in front of the Board of Trade as members in the same struggle, fighters for the same causes. And though I hadn't planned on it beforehand, I decided to keep occupying. I linked arms with a good friend—incidentally, a union member at a cafeteria where workers had recently won their first contract—and sat down on the edge of the tent city, awaiting advancing police officers.

If we are going to live in a country where 99 percent of people don't suffer at the whim of the top 1 percent, we'll need more union members high-fiving occupiers. After all, both are fighting the same fight.