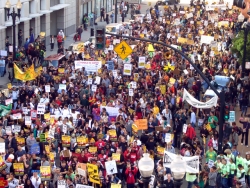 Thousands march and rally in front of the State Building in Oakland during the general strike called by Occupy protesters.   (Photo by R.M. Arrieta)

One week after Occupy Oakland voted to strike, longshoremen, SEIU and nurses union join the fray

OAKLAND—The General Strike called for by the General Assembly of Occupy Oakland brought out thousands of people to Frank Ogawa/Oscar Grant plaza yesterday—and together they shut down Bank of America, Wells Fargo and Citibank locations, snarled traffic, closed other businesses downtown, and re-routed buses.

The mostly peaceful action of city workers, teachers, students and unionists chanted and danced through the streets of Oakland. The crowd at times roared, “We are the 99%,” as they marched on specific bank targets as well as the State Building, where teachers were demanding greater funding for education. Oakland has just closed down five elementary schools. The state budget for California schools has been cut by $20 million over the past three years.

Operations at the Port of Oakland stopped as protesters blockaded the area. Earlier in the day, some Longshoremen did not go to work in the morning shifts. Oakland is normally the fifth busiest port in the United States.

Retired longshoreman Jack Hayman said in a press conference that members of the longshoremen's union had stopped work on their own in the morning. “The trucks with containers are backed up for at least a mile. None of the cranes are moving… and the rank and file of the Longshoreman’s Union did this on their own," Hayman said. "The leaders of the union wanted them to work today, but they by and large are not working the port.”

At 6 p.m., the Port of Oakland announced that “all maritime activities” had been shut down because of the sea of thousands of protestors descending on the port. Port Spokesperson Marilyn Sandifur said in a statement in the early evening that “Maritime area operations will resume when it is safe and secure to do so," which they did later at night.

Occupy Oakland asked workers on its website to “go on strike, call a vacation day or simply walk off the job.” Judging by the estimated 7,000 to10,000 people who took part in the actions throughout the day and evening, many did.

About 360 teachers at Oakland Unified School District observed the General Strike, Fifteen Headstart centers were closed because of the staff participation in the event, according to a city bulletin– and about 40 Port of Oakland workers did not show up for work at the hall that hires for daily jobs.

Many stores around City Hall were closed.

Long lines wound through the encampment in front of City Hall where Alameda Labor Council—an umbrella group for labor unions—set up food kitchen and grilled hotdogs and hamburgers and served potato salad.

There were endorsements by SEIU Local 1021 as well as the Oakland Educational Association. Harry Baker, member of the executive board of SEIU Local 1021, estimated there a few hundred members of his union participated yesterday. He said SEIU’s involvement in fighting for a more equitable economy began several years ago.

He told In These Times, “Our union at our convention in Puerto Rico nearly two years ago put 20 million dollars into what we called 'The Fight for a Fair Economy.' Mostly that organizing effort went into cities in the Midwest, in the East and Southern California. SEIU has been behind the fight against the banks for years.”

Baker, who has been a SEIU member for 35 years said, “I am totally fed up with how the banks have ruined our economy. As a result, public services are being strangled. They don’t know when to give up, the 1 percent. They’re going after more and more and more.”

Oakland was the site of the last great general strike in 1946, when 130,000 workers refused to work, in solidarity with 400 female retail clerks.

While this General Strike didn't attract the huge number of workers activists had hoped to attract (that may have had to do with the fact it was called for just one week ago), it did wonders for solidarity-building.

Dwight McElroy, president of chapter 1021 of SEIU, told Mitch Jeserich of radio station KPFA, “There’s a process that would have to take place in order to call a strike. We don’t want to get caught up in the semantics of it, we want to get caught up in the energy of it. The bottom line is that those individuals who were batoned and tear-gassed …they were out there for us because we are definitely the 99 percent whom they refer to.”

He added, “Our city and our coworkers are taking furlough days, they are losing their homes. We have individuals having to choose between their mortgage and having their cars repaired. We need to stand in solidarity. America has caused a marriage between the occupy and labor movement — it’s something that should have come some time ago, but it’s never too late.”

Hundreds of teachers and nurses turned out. Sharon Blaschka, a nurse practitioner and member of the California Nurses Association/National Nurses United union, said, “I believe in the OWS movement. It’s been a long time coming. It should have happened a long time ago. The 1 percent count on the fact that we don’t have enough time to get out there and do something major because we have to support our families. I had patients today, but I rescheduled all of them and when I called them to tell them why — they were excited about it.”