Goodbye to the ‘Middle Class’? A Lesson for Labor From Occupy Wall Street 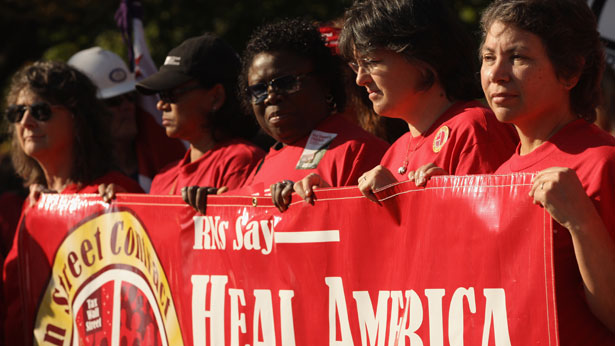 Members of National Nurses United and their supporters march in protest in front of the U.S. Treasury Department on November 3 in Washington, DC.   (Chip Somodevilla/Getty Images)

Occupy Wall Street (OWS) has given our timorous, unimaginative and politically ambivalent unions a much-needed ideological dope slap. Some might describe this, more diplomatically, as a second injection of “outside-the-box” thinking and new organizational blood.

Top AFL-CIO officials first sought an infusion of those scarce commodities in labor when they jetted into Wisconsin last winter.  Without their planning or direction, the spontaneous community-labor uprising in Wisconsin was in the process of recasting the debate about public sector bargaining throughout the U.S. So they were eager to join the protest even though it was launched from the bottom up, rather than in response to union headquarters directives from Washington, D.C.

This fall, OWS has become the new Lourdes for the old, lame, and blind of American labor. Union leaders have been making regular visits to Zuccotti Park and other high-profile encampments around the country. According to NYC retail store union leader Stuart Applebaum, “the Occupy movement has changed unions”—both in the area of membership mobilization and ”messaging.”

It would be a miraculous transformation indeed if organized labor suddenly embraced greater direct action, democratic decision-making and rank-and-file militancy. Since that’s unlikely to occur in the absence of internal upheavals, unions might want to focus instead on casting aside the crutch of their own flawed messaging. That means adopting the Occupation movement’s brilliant popular “framing” of the class divide and ditching labor’s own muddled conception of class in America.

Them and us, updated

In his 1974 memoir and union history, United Electrical Workers co-founder Jim Matles reminded readers that labor struggles are about “them and us”—or, as OWS puts it, “the 1 percent” vs. the “99 percent.” Unfortunately, most other unions have long relied on high-priced Democratic Party consultants, their focus groups and opinion polling, to shape labor’s public “messaging” in much less effective fashion. The results of this collaboration have been unhelpful, to say the least. Organizations that are supposed to the voice of the working class majority have instead positioned themselves–narrowly and confusedly–as defenders of America’s “middle class,” an always fuzzy construct now being rendered even less meaningful by the recession-driven downward mobility of millions of people.

As SUNY professor Michael Zweig argued in his book, The Working Class Majority: America’s Best-Kept Secret, labor’s never ending mantra about the “middle class” leaves class relations—and the actual class position of most of the population—is shrouded in rhetorical fog.

Zweig points out that the working class in America today looks quite different than the blue-collar proletariat of the last century, which leads many to believe that differences in “status, income, or life-styles” define where they stand on the economic and social ladder. But “the real basis of social class lies in the varying amounts of power people have at work and in the larger society….The sooner we realize that classes exist and understand the power relations that are driving the economic and political changes swirling around us, the sooner we will be able to build an openly working class politics.”

Well, thanks to OWS —but not most unions—that target is back in view. As a result of Occupation activity, there is now a far more favorable climate of public opinion for waging key contract fights at Verizon and other Fortune 500 companies.

A corporate pig roast in Albany

During the two-week strike by 45,000 Verizon workers in August, union PR people issued leaflets urging support for the CWA-IBEW “fight to defend middle-class jobs.” This characterization of strike goals enabled Verizon to run newspaper ads claiming that the  $75,000 a year or more earned by telephone technicians made them part of the “upper middle class”—and thus, apparently not worthy of sympathy from customers or members of the public whose jobs provide family incomes closer to the national or regional average.

By late October, Verizon technicians, who are part of a reform movement in CWA Local 1101, had marched through lower Manhattan in solidarity with OWS and along with NYC teachers, teamsters, and transit workers. Similar links between occupiers and Verizon contract campaigners developed in Boston.

Meanwhile, in upstate New York, members of CWA Local 1118 held a “corporate pig roast”—right around the corner from “Cuomoville,” the OWS encampment in downtown Albany that has so annoyed the state’s Democratic governor. At this OWS-inspired event, Verizon workers invited occupiers (more used to vegan and vegetarian fare) to join them. They were also brandishing new signs, with a far better, more universalist message: “We are the 99 percent!”

Interaction like this, between OWS and union rank-and-filers, has been mutually beneficial in many other places. On the labor side, Occupation activity has been a much-needed source of new energy and ideas. Lets hope that union members can keep pushing labor’s communications strategy in a more resonant OWS-influenced direction. If they succeed with that objective, more substantive and harder to achieve organizational change could be next on the agenda.

An earlier version of this article appeared in Logos.

Steve Early is a former national staff member of the Communications Workers of America (CWA) who has been active in labor causes since 1972. He is the author of The Civil Wars in U.S. Labor (Haymarket Books, 2010) and a contributor to the forthcoming, Wisconsin Uprising: Labor Fights Back, from Monthly Review Press.