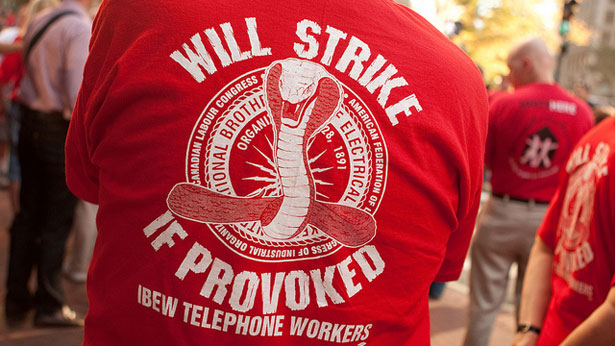 Verizon has fired 40 workers in the Northeast who were part of this summer’s picket lines during the two-week strike by 45,000 Communication Workers of America (CWA) and International Brotherhood of Electrical Workers (IBEW). The company said the fired workers were fired for violating the company’s “code of conduct,” which bans harassment, “threats of violence” and intimidation.

IBEW charges that stewards and executive board members were singled out and that the move is a negotiating tactic to push concessions at the negotiating table. The fired workers in the company's landline, Internet and television service believe they were used as a scare tactic to demoralize workers and so that unions would accept major concessions.

The union will fight the terminations and has filed charges with the National Labor Relations Board. IBEW Local 2222 Legislative Director Paul Feeney told The Boston Globe: “We think this is a heavy-handed technique that Verizon is using to pressure us at the negotiating table. ... The company couldn’t prove to us that they did anything wrong.”

This strike in August among workers from Massachusetts to Washington D.C., ended without any agreement from the company to withdraw any of its demands, although it did agree to “seriously bargain.” Workers returned to work under an agreement that eliminated caps on overtime.

Verizon continues to demand concessions from the workers, including the elimination of pensions for new hires, the freezing of pensions for current workers. The company wants workers to pay higher costs for healthcare, reduce sick days and end any restrictions on outsourcing. It all adds up to about $1 billion in concessions. Verizon, the nation’s largest carrier, has 196,000 workers, 135,000 of them nonunion.

Verizon says it needs the concessions because it was losing money as up to 35 milion landline customers departed during the past 10 years, and that increased competition was cutting into its profits.

Rich Corrigan, a steward in CWA Local 1101 in Manhattan, was among those fired. He told Labor Notes: “How do these guys sleep at night?” He noted that in his 14 years on the job, he had a spotless record. The union is considering firing perjury charges against managers who claim workers violated the company's code of conduct.

"...It's an unjust termination," John Colleran, a Verizon worker for 18 years, told the Globe, adding, "what they want to do is break the union."