End of the Newt & Andy Show? Breaking Up Is So Hard… 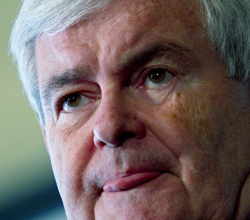 [A]fter an hour with Gingrich, I was more than pleasantly surprised by his thoughtfulness and candor….by Gingrich’s smart and contemplative demeanor. As only a history scholar can, Gingrich talked in broad historical terms of the change-making process, the challenges facing our country, and America’s need to confront its future….Gingrich’s thinking reinforced much of my own.

Whatever happened to the bonds of solidarity between two of America’s really big thinkers? The odd political coupling of former Service Employees International Union President Andy Stern and former House Speaker Newt Gingrich appears to be unraveling under the pressures of the latter’s campaign for the Republican Presidential nomination.

A report in the Huffington Post yesterday confirms that Gingrich is now distancing himself from his past praise of Stern. In Gingrich’s 2008 book, Real Change: From the World That Fails to the World That Works, the contemplative scholar who so impressed Andy described his new friend as follows:

Andy Stern…is the union leader who probably best understands the challenge of the world market and the need to make American union members productive in the face of world competition. Sadly, he is a distinct minority among union leaders.

Yesterday, an ex-Gingrich aide offered a Huffington Post reporter different sentiments. “Newt finds common ground with many people from the opposite side of the ideological spectrum. …He met with Andy Stern several times and Andy Stern had given Newt the impression that he was a forward-looking union leader. Turns out he wasn’t.”

In Real Change, Gingrich went on to chide his fellow conservatives for being so “blindly anti-union.” According to Newt, “there are legitimate reasons for workers to organize together and there is a strong need for a healthy, competitive union movement that helps improve the lives of its members and the competitiveness of our country.”

As Sam Stein noted in HuffPo yesterday, even faint admiration for labor and/or Stern is now “the type of thing that would get a Republican candidate half an hour of intense armchair psychology from Glenn Beck and other prominent conservatives”—not to mention criticism in the next GOP presidential candidate debate. So when asked by Stein about these now embarrassing passages from Real Change, Rick Tyler—the aide quoted above—“stressed that his former boss no longer agrees with those sentiments.”

Stern, on the other hand, has yet to distance himself from his own lavish praise of Gingrich. In his 2006 book, A Country That Works: Getting America Back on Track, Stern reports that he and then-SEIU Secretary-Treasurer Anna Burger met Newt in Chicago at a meeting of the Republican Main Street Partnership. (This encounter occurred during SEIU’s ill-fated quest for GOP political partners, when the union was giving $500,000 to the Republican Governors’ Association that helped elected anti-union governors like Mitch Daniels in Indiana.)

When Newt was House speaker in the 1990s, Stern “considered him the devil incarnate.” Only a few years later, however, Andy discovered they had much in common as fellow fans of futurism and “change agents” who agree that labor must “continually rethink its role in the changing economy.”

As a personal memento of their meeting, Gingrich presented Stern with “a set of diagrams he called ‘Designing Transformational Change’ that communicate twelve steps to promote organizational transformation.” During their conversation about Newt’s twelve-step program: “[he] launched into his lecturer’s mode… His working proposition is that change is learned and practiced behavior that require planning, strategy, and leadership. The titles of the diagrams convey the flavor of his language: Assert Truth; All Politics Is Personal; Focus on Offense Not Defense.”

Newt embellished his “parting gift” to Andy with “handwritten comments” that elaborated on his ideas about institutional change. After their meeting, Gingrich also sent Stern a further token of his appreciation-- “a personally annotated edition of Alvin and Heidi Tofflers’ Creating a New Civilization.”

In A Country That Works, Stern follows up his meditation on the importance of Gingrich’s thinking with “a plan for change” of his own. Writes Andy: “According to Newt Gingrich, success comes when we ‘Plan back from victory, rather than forward from the present,’ and that is my intention.”

Gingrich, of course, has moved on to higher forms of political discourse—and a hoped-for string of victories in upcoming GOP primaries. His latest work of contemplative scholarship was published in 2010 by Regnery Press, under the title: To Save America: Stopping Obama’s Secular-Socialist Machine. In this smart, candid, and thoughtful book, Newt argues that the aforementioned ”secular socialists”—i.e., the Democrats backed by Stern and SEIU in 2008--pose “as great a threat to America as Nazi Germany or the Soviet Union once did.”

Sadly, Stern appears to have made only a fair-weather intellectual friend in the GOP. Clearly, if he wants stay on the same page with such a quicksilver thinker, he will have to move more in Newt’s direction. Because Gingrich, as we’ve just learned, only finds “common ground” with those moving his way in “the change-making process.”

Steve Early is a labor journalist and former union organizer. He is the author, most recently, of The Civil Wars in U.S. Labor, from Haymarket Books, a critical study of SEIU under Andy Stern’s leadership.