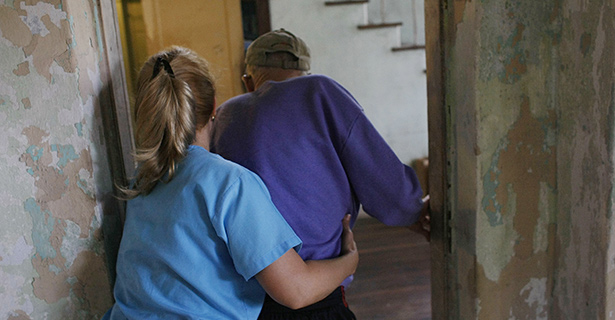 An in-home worker helps Robert Granville at his home in Miami. Some 6 million Americans older than 65 need some form of daily assistance to live outside a nursing home.   (Photo by Joe Raedle/Getty Images)

In-home care workers are increasingly integral to Americans' family fabric: Between now and 2018, use of in-home care service is projected to grow by 50 percent. In part because of its affordability, aging baby boomers are beginning to turn to in-home care for help with everyday personal tasks.

"The care provided by in-home workers is crucial to the quality of life for many families," Solis said in a statement. "The vast majority of these workers are women, many of whom serve as the primary breadwinner for their families. This proposed regulation would ensure that their work is properly classified so they receive appropriate compensation and that employers who have been treating these workers fairly are no longer at a competitive disadvantage.”

According to statistics from the federal government, of the 40 million Americans older than 65, some 6 million now need some form of daily assistance to live outside a nursing home.

Currently workers who care for many disabled and elderly people are classified as “companions”—a similar classification to babysitters—and therefore are not offered the protections of minimum wage and overtime pay guaranteed under the Fair Labor Standards Act (FLSA), the nation’s main wage and hour law.

The new rules would exempt these workers from being classified as “companions” so that they could enjoy those protections. Solis noted this week that about 2 million workers would be affected by the change. "[M]ore than 92 percent are women, nearly 50 percent are minorities, and nearly 40 percent rely on public benefits such as Medicaid and food stamps," Solis said. "According to the Bureau of Labor Statistics, home health care aides earn about $21,000 a year and many lack health insurance. That is unacceptable.”

The FSLA was passed in 1938 to provide minimum standards of living for workers by requiring employers pay at least minimum wage and overtime for more than 40 hours a week.

Now, the proposed rules would ensure that those workers employed by third-party staffing agencies receive protections, because the staffing agencies would not be able to claim the minimum wage and overtime exemption.

Although some states have minimum wage rules protecting home-care workers—such as California—29 states do not.