Happy Holidays? Not for 200 Pacific Steel Workers in California 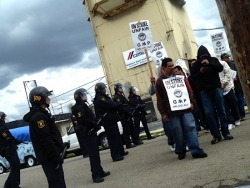 Pacific Steel Castings picket while on strike in March 2011, one month after ICE began its audit of workers' immigration status.   (Photo from baycitizen.org

SAN FRANCISCO—The end-of-year holidays aren't likely to be happy ones for 200 workers in the San Francisco Bay Area who have recently been fired—or are about to be. Today, just before Christmas Eve, yet another round of workers will be cut loose from Pacific Steel Castings Foundry in Berkeley, Calif., the largest steel foundry west of the Mississippi.

The company has laid off 22 workers each Friday since October, and will continue to do so until January 4.

The firings are fallout from a silent Immigrations and Customs Enforcement raid. The federal agency started its I-9 employee audit of worker immigration status back in February, as David Bacon reported for In These Times. The I-9 employee audits target employers who hire workers who are undocumented. The employers can face fines, jail time and the loss of government contracts.

ICE claims the 200 workers, many of whom had been employed at Pacific Steel for decades, had no legal immigration status. Employers notified of an audit have to turn over I-9 documents, which include Social Scurity numbers, birth dates and statements by workers about their citizenship status.

A spokeswoman for ICE told KTVU television station that the agency usually acts on tips when deciding which businesses to audit.

Pacific Steel, the fourth largest foundry in the United States, says it began the firing of more than a third of its workforce after pressure by federal immigration authorities. The company makes steel parts for trucks and custom molds with revenue totaling $100 million a year.

Pacific Steel spokeswoman Elisabeth Jewel told the Contra Costa Times, "This was not an action that the company invited. It's been a very wrenching experience for the company to lose so many highly valued, highly skilled employees, some of whom have been there for decades."

The workers’ union, government officials and community members appealed the audit and mass firings. The only thing it did was delay the firings of the workers the company identified as “nonresidents” until October.

A resolution passed by the Berkeley City Council in June to try to stop the federal audit stated in part:

These are skilled workers ... [who] inject hundreds of thousands of dollars into our local economy each month and support other businesses and families. The company and the workers pay taxes that support local schools and services. If the I-9 audit goes forward and workers are fired as a result, we could lose money that Berkeley desperately needs in these challenging economic times.

Pacific Steel also has suppliers whose businesses could also be harmed... An immigration audit leading to the firing of these workers will not create a single job and instead will force workers into an underground economy where illegal wages and conditions are prevalent.

More than 2,338 companies throughout the country have been audited by ICE since the fiscal year began October 1, according to the Wall Street Journal. This tops last year’s 2,196.

At a time when businesses are struggling to stay afloat, enforcement audits that lead to a large loss of employees can leave a business reeling. It sends workers into an underground economy filled with workplace violations.

The Glass, Molders, Pottery, and Plastics International Union—which has been representing the steel workers since the 70s—has filed a complaint over the audit and mass firings with the National Labor Relations Board.

“We haven’t tallied it all up but what we’ve counted so far is a couple of thousand dollars worth of food and gift cards. And toys. Lots of toys,” said Rev. Debra Walker of EBIIC. “The Food and Commercial Workers’ Union donated 200 chickens.”

She told In These Times that the action was organized because “there was a silence about it. That’s the thing about these raids, they are silent. The workers were going through this on their own."