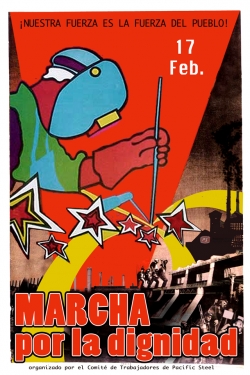 BERKELEY, CALIF.—More than 200 workers fired after a Department of Homeland Security's I-9 audit at Pacific Steel Casting plant in Berkeley, Calif., marched Friday to protest the “silent raids” they say are devastating to their families and livelihood. A statement from the Committee of Fired Workers From Pacific Steel Casting, which is organizing the march, read: “We will march with our heads held high, undocumented and unashamed.”

In These Times reported in December about the federal government's audit of Pacific Steel and subsequent firing of 200 workers, which was implemented in successive waves between October and January.

In a federal workplace audit, the government checks the validity of Social Security numbers and demands the firing of any worker who is undocumented and cannot provide a  valid number. Tens of thousands of audits, done through no-match letters, I-9 audits and the "E-Verify" program, have led to massive firings across the nation.

Many of the fired Pacific Steel workers had been at the company for years, including Adrian Pacheco, who worked at the plant for seven years. The father of five including a 4-month-old, told In These Times that since his release, he’s been working “here and there. It’s hard. We are accustomed to a work routine and then it’s snatched away. It’s sad ... we were working not robbing.”

Pacheco said they worked “hard and long. We would work between 8 to 12 hours a day. We were pushed.” As each worker was fired, he received payouts for whatever vacation they had accrued and two weeks pay. For Pacheco, it was humiliating.

He told In These Times that he and several other workers officially laid-off on a Tuesday had to come back for their final pay on Thursday. The company didn’t have the money ready for them on their last day. “The company sent us away without even a ‘thank you,” there was nothing,” he said.

For another former worker at Pacific Steel, the audit complicated his potential kidney transplant. Jesús Navarro had a matching donor and a private insurance policy that would pay for the procedure. He waited for years and had finally reached the top of the transplant list.

As doctors and administrators at UC San Francisco Medical Center consulted him, they learned of his immigration status and refused to do the surgery because there was no guarantee the drugs and after-treatment would be paid for. The after-care drug costs to prevent organ rejection cost $20,000 a year. HIs wife told the Contra Costa Times, "I started crying and crying and crying."  She asked that her name be withheld because she is also undocumented.

The kidney would have been transplanted from his wife. Although Navarro now pays for the private insurance he once had through his job, the option lasts only 18 months. Since he's been laid-off, he could end up on the state’s Medi-Cal program, which won’t pay for transplants for undocumented patients.

A story about his dilemma appeared in news outlets and several petitions were sent out by the Alameda County United in Defense of Immigrant Rights (ACUDIR), the Pacific Steel Worker Committee and Change.org. More than 140,000 signatures were collected protesting Navarro’s treatment by UCSF Medical Center.

Not surprisingly, administrators there retracted their decision and agreed to give Navarro his transplant. A joint statement went out issued by UCSF and Navarro basically saying it was all just a misunderstanding. Several financial donors also stepped forward to say they would help him as well.

Meanwhile, his former co-workers maintain their fight. Since the start of the “silent raid” policy put in place by the Obama administration in 2009, ICE has reportedly carried out more than 3,000 workplace raids, compared to about 500 in 2008. Civil rights activists note that companies employing unionized workers are most affected.

Law firm and unions try to understand I-9 protocol

In September, after ICE announced last February and June that it would be auditing 2,000 employers, the law firm Weinberg, Roger & Rosenfeld filed a Freedom of Information Act to learn more about exactly how I-9 audits are conducted.

The request was on behalf of two local unions and one international union, including the one that represents workers at Pacific Steel: the Glass, Molders, Pottery, Plastics & Allied Workers International Union Local 164 B; along with the ACLU-Northern California and the Service Employees International Union (SEIU) United Service Workers West, and the SF Bay Guardian newspaper.

The request stated in part:

… it appears that many of the targets of these workplace enforcement investigations by DHS are not the unscrupulous or bad apple employers. To the contrary, worksites that have been targeted include employers that are trying to do the right thing such as abiding by industry standards and complying with state and federal employment laws. In many cases, targeted employers have been parties to existing collective bargaining agreements with labor unions where workers are paid a living wage and have further protected workplace rights. These audits have a detrimental impact to local businesses, the economy, and workers in the U.S.

The public has a right to know about these 'silent raids' on American workplaces. Is the federal government trying to detect bad actors who hire undocumented workers to avoid labor law obligations, or are there other triggers that explain why several unionized workplaces have been audited recently?

Conchita Lozano-Batista, an attorney with Weinberg, Roger and Rosenfeld stated, "From janitorial firms, to Pacific Steel, to Chipotle, there is a lot that we just don't know about federal immigration audits in the workplace.” She added: “…without the full picture and supporting documentation, it would seem that the employers who are bearing the brunt of these audits are employers who are involved in collective bargaining agreements with labor unions. That is bad for business, workers and the American people."

Pacheco said Friday's march was fundamentally about the injustice of the audits. “We are marching today for our dignity. For the hurt and sadness and the consequences of this audit. ... They talk about undocumented workers taking jobs, but I’d like to know what would happen if for one day, all the undocumented laborers would stop working.”