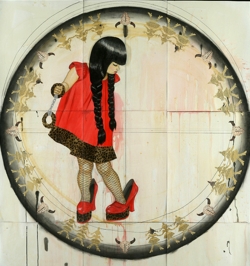 Many people have read or heard reports of the global crisis of sex trafficking and prostitution. But few are aware of how disproportionately Native American women and girls are impacted.

In San Francisco, native artist Geri Montano examines this critical overlooked issue in her exhibit, “Traded Moons,” which runs from April 14 to May 12 at the Galeria de la Raza gallery.

Montano told In These Times, “I acknowledge sex trafficking is a crisis overseas and in many cultures around the globe. It’s reached crisis proportions. But being of Native descent and rarely hearing about the sex trafficking which affects Native American women here in the U.S. and First Nations people..., I was moved to bring this to public attention.”

Montano addresses this ongoing crisis in her mixed medium work, which includes collages, sketches, drawings and images of indigenous women and girls, surrounded by symbols of native culture.

In “Sundance in Red,” a young girl with long black braids wears a red fur-lined dress and oversized red high heels, a pair of handcuffs dangle from one wrist. Paper doll cutouts surround the image. Another work, “7th Moon,” shows a young girl wearing her hair in traditional Hopi buns and necklace, in a garter belt, black stockings and red shoes. There are moon images around her. She stares out at the viewer.

Says Montano, “The forced removal of native children and the trauma of relocation and abuse correlates strongly to sex trafficking. There is a socio-political link. Traffickers target women and girls who are living in vulnerable conditions due to poverty, previous abuse, or during times of political upheaval.”

A bill introduced in October by U.S. Senate Indian Affairs Committee Chairman Daniel K. Akaka (D-Hawaii)—S.B. 1763, or the Stand Against Violence and Empower Native Women (SAVE Native Women) Act—would provide Indian Country with jurisdiction over non-Indians who commit crimes on Indian lands, improve the Native programs under the Violence Against Women Act (VAWA), and improve data gathering programs to better understand and respond to sex trafficking of Native women. It would also require the National Institute of Justice to include women in Alaska Native Villages and sex trafficking in its study of violence against Indian women.

Nicole Matthews, executive director of the Minnesota Indian Women’s Sexual Assault Coalition (MIWSAC) told Indian Country Today, “Native women are at exceptionally high risk for poverty and sexual violence, which are both elements in the trafficking of women.” Matthews co-authored "Garden of Truth," an October 2011 report on prostitution and trafficking of native women in Minnesota. Conducted by MIWSAC and the San Francisco-based Prostitution Research & Education, the study is based on interviews with more than 100 Native women.

("Garden of Truth" follows a 2009 report by the Minnesota Indian Women's Resource Center (MIWRC), “Shattered Hearts” (PDF), which documented the commercial exploitation of native women and girls in Minnesota and was sparked by various reports from tribal advocates in South Dakota and Minnesota of indigenous females being trafficked over state lines and into Mexico as well as police rescuing native girls who had been lured off reservations and taken onto ships in port.)

A United Nations report released this month, “Global Report on Trafficking in Persons,” says 2.4 million people around the world are traded into slavery each year. Eighty percent, or 1.9 million, are victims of sex trafficking.

Yuri Fedotov, the head of the U.N. Office on Drugs and Crime, told a day-long General Assembly meeting on trafficking that 17 percent are trafficked to perform forced labor, including in homes and sweatshops. He said $32 billion is being earned annually by those who run human trafficking networks, and that two-thirds of victims are women. “At any one time, 2.4 million people suffer the misery of this humiliating and degrading crime,” Fedotov told the assembly.

Some of the traffickers pull women and girls from Native American reservations. In its "Shattered Hearts" report, MIWRC says the historic experiences of native women in the United States make them “uniquely vulnerable to commercial sexual exploitation, and unique in the ways that such exploitation impacts their well-being.”

Melissa Farley, founder of Prostitution Research and Education, who co-authored the "Garden of Truth" report, and who spoke April 14 at a panel on Montano’s exhibit, told Indian Country Today, “It has rarely been included in discussions of sexual violence against Native women. The...women in this study did not choose prostitution. Instead, prostitution chose them, through a combination of harms perpetrated against them and a lack of escape options.”