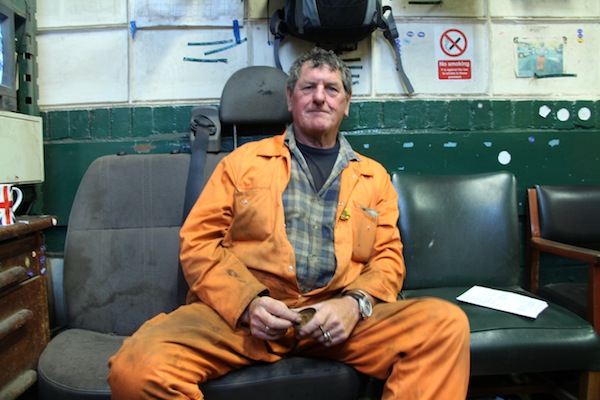 Kari Lydersen recently spent a week in England reporting on coal mining and coalfield communities through a Climate Media Fellowship from the Heinrich Boll Foundation North America. Three profiles to come will feature coalfield figures bridging the past and present of this once-mighty industry.

WAKEFIELD, YORKSHIRE, ENGLAND—Years after the closures of the coal mines where he once worked, Andy Smith still dons his mining gear nearly every day and heads underground. During breaks he hangs out with other miners, covered in coal dust and grime, in a grungy small locker room where they make bawdy jokes in thick Scottish and Yorkshire accents almost unintelligible to an outsiders.

Smith and his colleagues are guides at the National Coal Mining Museum in Wakefield, one of the many “coalfield communities” in Yorkshire in central England. Nearly all of the underground coalmines in these parts, which used to employ tens of thousands of miners, have closed—the victim of competition from cheaper imported coal and former Prime Minister Margaret Thatcher’s concerted attack on the once-powerful National Union of Mineworkers.

The brutal yearlong strike of 1984-1985 turned coalfield communities into virtual war zones. The union opposed a systematic mine-closure plan and the government’s attempts to gut their labor rights. Former miners and their families describe the stand-off even now as if it was yesterday: police roadblocks where people were pulled out of vehicles and beaten; scores of picketing miners severely injured by nightsticks and kicks to the head; miners’ families barely scraping by with no heat in their homes and little food; and bitter conflict between the majority of striking miners and those who continued working.

Though the strike was ultimately a failure—many of the mines closed for good over the following decade -- it was also a time of ecstatic solidarity and revolt. Miners and their wives traveled the country and even internationally, speaking about their struggle. Support poured in from around England and abroad. And women who previously saw their most important duty as having dinner on the table for their husbands were suddenly organizing and protesting autonomously. The group Women Against Pit Closures played a crucial role in the labor movement.

In Yorkshire today there are few visual reminders of the strike or the legendary coal mining industry that once powered much of the country and formed the bedrock for thriving, rough-but-close-knit “pit towns.” They were known for their vibrant, distinct cultures, including raising pigeons and ferrets, playing rugby and football, and throwing annual galas and local “welfare societies” that made sure families’ needs were met.

“My father raised greyhounds; people raised pigeons and had gardens; on holidays as a kid you could go around and the retired miners would give you tea and a sandwich,” recalls Willy McGranahan, a former miner, originally from Scotland, who serves as deputy director at the mining museum.  “The pit was more than just a job, it was a way of life. That’s gone now, people are more isolated.”

“It’s sad,” adds miner-turned-museum guide David Halsted, nicknamed “Chewbacca” for his striking resemblance to the Star Wars character. “It’s very much like being in the army, you look after your friends and colleagues and they look after you. That time spent in village working men’s clubs, in pubs—that social togetherness is all gone.”

Most of the mine infrastructure was dismantled shortly after pits (as underground mines in England are called) were closed, and now most of the spoil heaps—composed of waste rock and detritus—are covered in grass and blend into the landscape.

A full generation has passed since the mine closures, and another generation is growing up. As intrinsic as mining has been to the area’s identity, collective memories fade. A major goal of the National Coal Mining Museum and smaller museums in individual coalfield communities is to keep alive the history of mining and what it meant to people and communities in places like Yorkshire, Nottinghamshire and Durham.

Smith and the other miners who now work as tour guides say they love their jobs, where they are still spending their days in a mine but imparting knowledge rather than extracting coal. They lead visitors through a sprawling stretch of the former working underground mine known as Caphouse. In the underground mine, equipment from throughout the ages and surprisingly lifelike statues of humans depict the working conditions of miners from the Victorian era on.

Working conditions for the miners in the 1800s—from the Victorian Era through the Industrial Revolution—were truly shocking, even given the generally hellish conditions for workers in those days. Families worked as teams, spending much of their life on their hands and knees toiling in near-complete darkness.

Statues in the mine tour illustrate how men would hack coal loose from the walls from a sitting or lying position, while their wives would crawl on all fours, pulling or pushing the coal in a wooden cart, originally without wheels, fastened by chains around their waists. The couples worked with only a small candle, purchased like their other equipment from the landowner. They would mine in chambers blocked by a wooden door to guard against gas explosions. Children as young as 6 also worked in the mines.

In 1842, women and children under 10 were banned from working underground, so they were replaced with the famous “pit ponies,” who often lived their whole lives underground. Conditions improved greatly after the mines were nationalized in 1947, and miners and pit ponies were granted two weeks off a year. Fatalities dropped from 357 per 100,000 workers in 1886 to 30 in 1971, according to the Yorkshire mining history Remembering How it Was, by editor and labor journalist Granville Williams.

While Smith marvels at the primitive and terrifying conditions under which the Victorians labored, he and other 20th-century miners spent countless hours working in a way that was not so different: lying prone in seams just 20 inches high, harvesting coal by hand (albeit with electric tools).

Smith said, “I have bad knees. A lot of people have bad backs, vibration white finger” (blood vessel constriction and nerve damage from holding vibrating drills). Not to mention, of course, black lung disease and other disabling respiratory ailments.

Many former miners have contradictory feelings about their past work—they miss the camaraderie, the feeling of purpose, the challenge; and they are infuriated by the political decision to leave millions of tons of coal unharvested belowground. But they shake their heads in awe of what they used to do.

“I worked under this table for 20 years,” said Harry Malkin to a gathering of former miners at Williams’ home, gesturing to the several-foot-high space below the dinner table. Now Malkin makes his living as an artist, including creating memorials for laid off and killed miners. “I must have been out of my mind. We were crawling around in a Victorian atmosphere, eating where you crap, crapping where you eat.  It was not even Victorian, more like Neanderthal.”

The museum’s underground tour also tracks mining technology as it evolved to extract more and more coal with less and less manpower. Smith worked on the massive machines used in larger seams which became increasingly common after the 1960s, known as the “long wall” method. Smith operated a series of hydraulic posts to keep the mine ceiling from caving in, while a giant machine on caterpillar tracks chewed away coal, dumping it onto a conveyor belt. As the machine crept along underground, large sections of the roof were allowed to collapse behind it. This caused the “surface subsidence” seen in Pennsylvania, West Virginia and many other coal-mining areas—where the earth sinks or caves in, causing houses on the surface to crack and slump.

England’s coal-fired power plants are now supplied with coal largely from high-tech, massive open-pit mines in other countries, including the Cerrejon in Colombia, where no tunneling is needed. Gigantic machines simply gouge out huge swaths of earth and then remove the coal, with relatively few workers involved. Coal exporter Australia has pioneered unmanned mining machinery, and analysts say that the future of Australia’s coal industry lies in highly automated mines deep underground where production levels could dwarf anything seen today.

The mass importing of coal irks miners such as Malkin—not only because it meant the decimation of their union and their proud industry, but also because they’ve heard about the labor, human rights and environmental debacles in many of the mining industries from which Britain imports coal. These include indigenous communities brutally displaced for mine expansions, children working hard jobs without adequate safety equipment, contaminated water and shorn-off mountaintops.

“I believe in the market economy, but we’re importing coal from Peru and Colombia, places with almost slave labor,” said Halsted. “That’s wrong.”