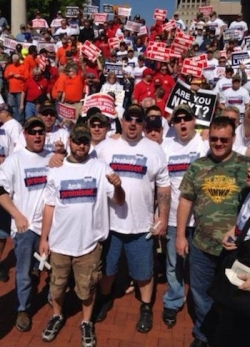 The UMWA staged huge rallies to try to sway the judge in Patriot Coal's bankruptcy case, but the ruling went against the union. (UMWA Local 2300)

Today, in a decision long dreaded by union coal miners, a bankruptcy court in St. Louis agreed that Patriot Coal has the right to void its collective bargaining agreements and cancel its pension and retirement obligations to 20,000 workers and family members.

The United Mine Workers of America (UMWA) argued in court that Patriot should not be let out of its debts, charging that its parent company, Peabody Energy, had designed Patriot to fail as a ploy to get out of $1 billion in retiree obligations. According to a financial analysis by Temple University Professor of Finance Bruce Rader, Patriot Coal was spun off from Peabody Energy with 42 percent of Peabody’s liabilities, but only 11 percent of its assets.

However, Judge Kathy Surratt-States of the U.S. Bankruptcy Court of the Eastern District of Missouri ruled that Patriot can stop payments to the union pension fund as soon as July 1 and no longer has to cover the full cost of retiree healthcare plans, instead paying a fixed amount into a healthcare fund administered by the union.

In her 102-page decision, Surratt-States wrote:

Unions generally try to bargain for the best deal for their members, however, there is likely some responsibility to be absorbed for demanding benefits that the employer cannot realistically fund in perpetuity, particularly given the availability of sophisticated actuarial analysts and cost trend experts.

The company cheered the ruling, which is expected to save it $150 million a year in labor costs.

"This ruling represents a major step forward for Patriot, allowing our company to achieve savings that are critical to our reorganization and the preservation of more than 4,000 jobs," said Patriot President and Chief Executive Officer Bennett K. Hatfield in a statement released by the company. "The savings contemplated by this ruling, together with other cost reductions implemented across our company, will put Patriot on course to becoming a viable business."

The UMWA and its supporters immediately blasted the decision.

“The UMWA presented a very clear picture in court of what Patriot actually needed to come out of bankruptcy,” said UMWA President Cecil Roberts in a statement. “Patriot can survive as a viable and profitable company well into the future without inflicting the level of pain on active and retired miners and their families it seeks. Patriot is using a temporary liquidity problem to achieve permanent changes that will significantly reduce the living standards of thousands of active and retired miners and their families.”

“I join the thousands of miners in our state who are deeply disappointed with today’s ruling,” said Sen. Jay Rockefeller (D-W.Va.) in a statement. “Once again we are seeing how the bankruptcy system is stacked against the American worker. I will continue fighting to put workers and employers on a level playing field by closing the legal loopholes that allow companies to pad their profits while abusing the legal system to escape from the promises they made. It’s tragic to watch how some industries treat their workers after they’ve given much of their lives to these companies.”

The union plans to appeal the decision in Federal District Court. In the meantime, although Patriot is at liberty to leave the bargaining table, both the union and the company say they will continue negotiations.

"While the Court has given Patriot the authority to impose these critical changes to the collective bargaining agreements, and our financial needs mandate implementation by July 1, we continue to believe that a consensual resolution is the best possible outcome for all parties,” Hatfield's statement read.

Unless the parties come to another agreement, the ruling means that Patriot Coal's healthcare obligations will be turned over to the Voluntary Employees Benefits Association (VEBA), a fund that would be administered by the union. According to the UMWA, Patriot will only guarantee to pay in a total of $15 million, plus $0.20 per ton of coal mined, which the UMWA calculates will cover only $5 million a year in retiree benefits. Retiree healthcare for Patriot Coal’s 20,000 beneficiaries currently costs $7 million a month, the union says.

According to the UMWA, Patriot Coal has offered the union a 35 percent stake in the company that the union can choose to sell in order to better fund the VEBA. The union, however, says that “since the current and future value of the company is unknown, there is no way of knowing how much money this could provide for healthcare benefits or when such funding would be available.” The company has also proposed a profit-sharing mechanism to help fund VEBA, the UMWA says, but it estimates the plan would provide only an additional $2 million a year.

“We will continue to meet with the company this week to see if there is a way forward,” Roberts said. “We have long acknowledged that Patriot is in trouble, because it can no longer pay Peabody and Arch’s bills. We remain willing to take painful steps to help Patriot get through the rough period it faces over the next couple of years. But if we’re going to share in that pain, then we have every right to share in the company’s gain when it becomes profitable again.”

With the collective bargaining agreements canceled, the union, which represents 1,700 current workers at Patriot Coal in addition to the 20,000 beneficiaries, is now legally free to declare a strike at any time.

The union says it is keeping that possibility on the table. “No option has been ruled out,” UMWA Communication Director Phil Smith wrote in an email to Working In These Times. “We are in talks with the company to see if there is an agreement that can be reached that is more reasonable than what the judge ruled. We’ll see what the future brings.”