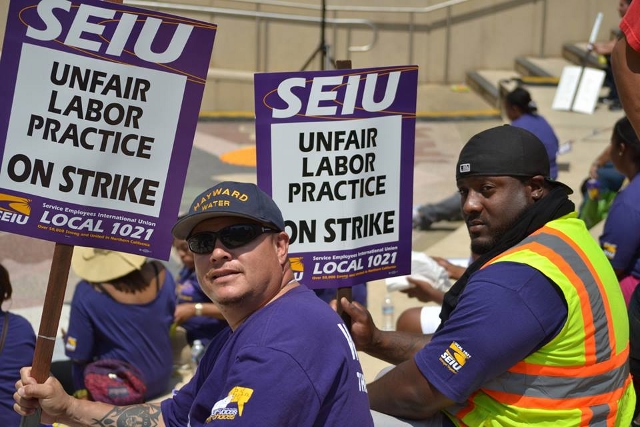 San Francisco and surrounding cities braced for a tangle of commuter woes today as Bay Area Rapid Transit (BART) workers took to the picket lines. It’s the first BART strike since 1997; the system serves some 400,000 commuters a day.

Around midnight on Sunday night, talks broke off between Amalgamated Transit Union Local 1555, SEIU 1021 and Bay Area Rapid Transit officials, hours before a planned strike deadline. Together, the unions represent more than 2,300 workers, a majority of BART employees.

The San Francisco Chronicle reported this morning that BART was using charter buses to carry passengers on their morning commutes, while Alameda-Contra Costa Transit buses crossing the bay were filled to capacity. The newspaper also reported 24-minute delays on I-80 from the Carquinez Bridge to the Bay Bridge Toll Plaza, despite many people carpooling.

The unions and BART officials cannot agree on pay and benefit levels. Unions are requesting raises of 4.5 percent per year for the next three years to make up for a pay freeze that has been in effect since 2009. According to the Amalgamated Transit Union’s We Make BART Work website, the union negotiators walked out of talks after “40 hours without a single new economic proposal from agents representing BART’s elected Board of Directors.” The site explains:

“The negotiating teams for both unions waited in the bargaining room all day Saturday at the request of the mediator assigned to oversee bargaining, but management negotiators never showed up.  Similar stalling on BART’s part took place on Friday as well.”

Josie Mooney, spokesperson for SEIU 1021, said in a statement, “BART management is engaging in what is called ‘surface bargaining. They’re trying to appear in public like they are working to keep the trains running, but they’re doing nothing to respond to good-faith offers by BART workers aimed at avoiding a strike.” SEIU 1021 represents 1,433 mechanics, maintenance workers and professional staff.

Antonette Bryant, president of Amalgamated Transit Union Local 1555, told the San Francisco Chronicle, "We are hoping the district brings us something substantive that we feel we can take to our members so we can settle this.” ATU 1555 represents 945 train operators and station agents.

Another issue that has come up at the bargaining table is worker safety. Between 2009 and 2012, the number of station agents assaulted jumped from nine to 31, according to BART.  “Workers are upset BART is ignoring their claims of safety hazards including threats of violence. The answer at the table was ‘we’re not interested’… that’s not speaking to the concerns that we have. That’s clearly showing a lack of interest in taking care of the members who come to work every day,” said one worker who was at a support rally.

Meanwhile, the neighboring AC Transit, whose workers are represented by the Amalgamated Transit Union Local 192, is in the midst of its own labor issues. Representatives for Local 192 were at the bargaining table Sunday until midnight, unable to reach an agreement with AC Transit but calling off a threatened strike, at least temporarily. As evidenced by the AC Transit buses filled to capacity this morning, simultaneous work stoppages between BART and AC Transit would cripple Bay Area public transportation.  AC Transit services 174,000 riders a day.

Shirly Pena, a BART worker, told KPFA, “We haven’t had a wage increase in about eight years. Our medical continues to increase.  They want to have us put more into our pension.”

One worker posted on her Facebook page: “As a BART train operator, I received a raise of ten cents an hour 5 years ago, and that was it for 8 years! We were offered 1% in four years and they want us to pay for our medical and pension. We do not get Social Security. BART management just gave themselves a ten percent raise. They have plenty of dollars! Last contract where we got nothing, they found 135 million dollars, and gave a few commuters a coupon for a cup of coffee! ATU 1555 is a strong union. We are the gold standard of unions in this country. We are standing our ground.”

Commuter reactions on social media have been mixed thus far, with some supporting the BART workers and others simply annoyed by the difficult commute. SEIU 1021 and ATU 1555 held a large rally this afternoon at Oakland’s Frank Ogawa Plaza, with another rally planned at San Francisco's United Nations Plaza this evening.