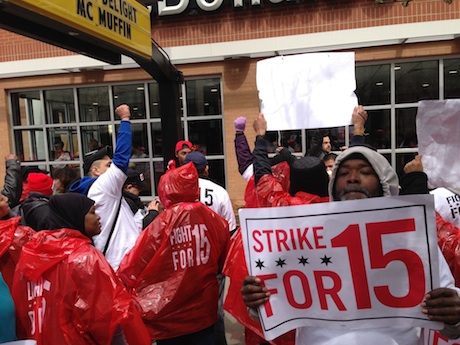 Nearly 500 low-wage workers walked off the job in a Fight for 15 strike April 24th. (Photo from the Fight for 15 Facebook page)

Hundreds of fast-food and retail workers in Chicago are on strike today and tomorrow, joining thousands of other workers walking off the job this week in at least seven cities across the country, including New York, Detroit and St. Louis. For most of these cities, this is the second time in recent months that low-wage employees—primarily in the fast-food industry—have staged single-day walkouts calling for higher pay and more respect on the job. The campaigns are part of a coordinated burst of low-wage worker organizing financially supported by the Service Employees International Union (SEIU).

Chicago’s Fight for 15 campaign was formally launched on November 15, 2012, when over 200 workers from 100 fast-food and retail stores held the founding convention of the Workers Organizing Committee of Chicago (WOCC), a new union. Like similar SEIU-backed low-wage worker campaigns in other cities, the Fight for 15’s two main demands are a $15-an-hour wage and the right to unionize without employer intimidation. After holding demonstrations around downtown Chicago’s upscale shopping areas on North Michigan Avenue and State Street during the holiday shopping season, the WOCC mobilized its first strike on April 24, which saw upwards of 500 workers walk off the job at 30 different locations.

Since the recent recession ended, 58 percent of newly created jobs in the U.S. have been in low-wage occupations, with the retail and food service industries seeing the highest job growth. Despite myths that “only” teenagers and college students hold such jobs, nationally 40 percent of minimum-wage workers are between the ages of 25 and 54, while in Chicago about 57.4 percent of low-wage earners are over the age of 30.

While raising wages from the current Illinois minimum of $8.25 an hour to $15 will likely be a long struggle, the new wave of organizing and collective action is already bearing fruit, as low-wage workers discover power they never realized they had, breaking with an anti-union mindset and culture that for decades has told them to tolerate stagnating wages and worsening economic conditions because they have no chance of changing things.

WOCC members say they have already won significant victories since the campaign was launched, especially since the April 24 strike. Krista Reese, a Nordstrom Rack sales associate, says that in January, a female customer attacked her while she was alone in the store’s fitting room. After the incident, she says, management promised that no employee would ever be alone in the fitting room again. Within a month, however, Reese says management went back to sending workers to the fitting room alone.

“After we went on strike,” Reese says, “they changed the fitting room policy completely.” Now, she reports, there are always between three and five employees in the fitting room. Furthermore, Reese says that since the April 24 strike, she and her coworkers have received 25-cent raises and more agreeable schedules, and that management has been “way more respectful,” even occasionally giving workers cake.

Similarly, Sonia Acuña, who has worked at McDonald’s for nearly nine years, says her managers have become much more respectful since the strike. Before April 24, Acuña says the managers would regularly “scream” at her and her coworkers (in particular, she says, male managers would yell at female employees). “Now they don’t do that anymore,” she says. “I don’t let them do that. I value myself and they respect me.”

Acuña also says that since the strike, McDonald’s management covers the cost of uniforms—which employees used to have to pay for themselves—and provides workers with free lunches.

Lorraine Chavez, outreach coordinator at Fight for 15, says WOCC members report similar victories at other workplaces, with workers in many instances winning improved schedules, modest raises, better break rooms and an end to abusive treatment from managers. “These are the kinds of things workers are joining a union for—not just the $15 an hour, but a complete change in their working conditions,” Chavez says.

Along with winning better working conditions, WOCC members say they have newfound courage. When she walked off the job in the early hours of April 24, Sonia Acuña became the first Chicago fast-food worker to go on strike. “In the beginning I was really scared, but when I saw that people from other [worksites] were joining, they really gave me strength to fight for the campaign and fight for myself,” she says.

“I’ve never done [anything like] that before,” Acuña continues, “but now I feel so much stronger.” She adds that after the April 24 strike, many of her coworkers who were originally scared of joining WOCC or going on strike lost their fear: “Now a lot of them have joined and want to stand with me next time.”

Krista Reese notes that the lack of employer retaliation against strikers made other workers less hesitant to join the fight. “When I came back to work and nothing happened to me, that really inspired other workers to get involved,” she says. “I’m not scared anymore. I know that I have people supporting me and that they’ll stand with me if we have an issue at work.”

Part of what inspires the retail and fast-food workers of the Fight for 15 is simply meeting and talking with other low-wage workers and recognizing they are not alone. Regular meetings have become a vital component of the campaign.

“The workers are so scattered and diverse—it’s not like you have 300 workers at a single factory who can all communicate with each other. So the organizing committee meetings are the only real opportunity for workers from different stores and restaurants to get together and to talk to each other,” Lorraine Chavez explains.

Chavez says that at the meetings, WOCC members not only hear testimonials from their fellow low-wage workers and are encouraged to recruit new members, but they also learn about their rights under labor law. “Most people have no idea that we’re allowed to organize without retaliation and there are legal responses if you get fired,” she says.

Sonia Acuña has helped form a support group just for female workers in fast food, who often face harassment from male managers. “A lot of [women] get treated really badly and they need the same type of support that I needed,” Acuña explains.

Currently, the campaign’s main priority is to organize more workers. Specific strategies on leveraging employers to raise wages and formally recognize the union have yet to be determined, though Lorraine Chavez says multiple avenues are already being explored, from pressuring business associations to lobbying policymakers.

“What’s important to remember is that this is a process and you can’t predict every single path you’re going to take at the beginning,” Chavez says. “Right now we’re really focused on building membership and becoming as strong as an organization and a union as we can.” Over 1,800 workers have signed up to join the Fight for 15 so far.

As the Fight for 15 grows its ranks, Chavez says, the union simultaneously aims to “advocate for [the workers] and show them that even as we go along organizing, there’s a great deal of power that they do have, but probably in this non-union age don’t even realize.” Such advocacy efforts have taken the shape of demonstrations, petitions and legal action around issues such as scheduling, workplace safety, and harassment.

The Fight for 15 is sending the message that higher pay benefits society as a whole by partnering with several community, faith and labor organizations, including Action Now, Stand Up! Chicago, Jobs with Justice, the Chicago Teachers Union, the United Electrical Workers, and Arise Chicago. WOCC members and staff say they are also partnering with the SEIU-backed low-wage campaigns in other cities, with Chicago workers visiting St. Louis and Milwaukee when fast-food workers in those cities held walkouts in May. Workers from the different campaigns have held conference calls in recent weeks, strategizing ways to coalesce into a unified national movement. There is also communication and solidarity with the OUR Walmart campaign, which is organizing Wal-Mart store associates nationally, and the warehouse worker campaigns in California and Illinois, which are organizing in distribution centers vital to the retail supply chain.

As the U.S. labor market becomes increasingly dominated by low-paying positions offering few benefits and erratic schedules, campaigns like the Fight for 15 present the only glimmer of hope for millions of workers and their families. Just as industrial unions in the 1930s managed to turn miserable factory jobs into the well-paying blue-collar careers many Americans are now nostalgic for, the Fight for 15 could transform fast-food and retail jobs into decent occupations paying livable wages and providing long-term economic security.