Caring for Workers Who Care for Our Loved Ones 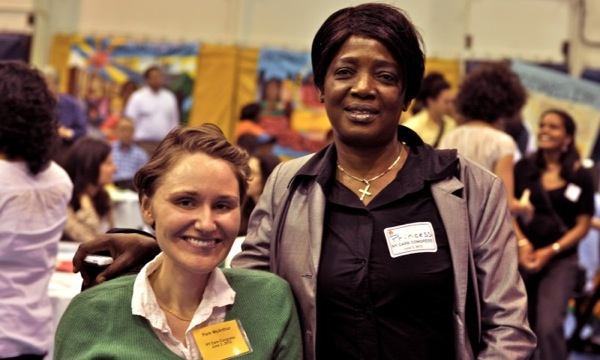 At a June 2012 New York Care Congress at Pace University, care workers came together with community members to discuss how to 'create quality, dignified care for all.' (Photo from ALIGN NY)

For many seniors, growing older means facing new kinds of stress—such as fragile health, a tight budget on a fixed income, or the travails of living alone.

And for the people who care for the aging, the stress can be just as severe. When her client is going through a rough time, one domestic worker says she lives through every minute of it, too: “Sometimes we stay there for five days…and we don’t know what’s outside…You cannot leave the job.”

Stories like this one, recorded as part of a survey of New York's care workers, form the invisible pillar of an evolving industry that is making the private home the center of public health, and in the process, reshaping our relationships of family, work, community and social service. Yet the home care workforce, which is driven largely by poor women of color, mirrors inequities embedded in the low-wage economy. At work, caregivers manage the lives of our loved ones while often facing exploitation and abuse, and after a long day of delivering comfort to vulnerable clients, many struggle themselves to cope with ingrained poverty their communities.

To open a conversation about the economics and ethics of caregiving, ALIGN (Alliance for a Greater New York) has partered with the national advocacy campaign Caring Across Generations, along with various community and labor groups, to study New York City's more than 150,000 home care workers. The surveys and investigations published by ALIGN reveal structural problems in the industry and identify potential for reforms that work for those who give and those who receive care.

In New York, the home care industry is booming as more seniors opt to live at home rather than in institutions. Thousands across the city earn their living by taking care of seniors and people with disabilities. Overall, according to the study, the sector “will be the single biggest driver of employment in the city in the coming years.”

On a typical day in New York, these workers, mostly women of color and immigrants, act as both therapists and companions, managing medications, bathing and feeding, and helping seniors feel dignified even on the days they can’t get out of bed. On top of this, the workers have to negotiate with stressed families about hours and pay--and typically take home low wages that keep them and their families mired in poverty.

And yet it turns out that consumers and providers of care want the same things. ALIGN’s surveys of New Yorkers, including both caregivers and care “consumers,” show strong concern about decent pay for workers, along with retirement and healthcare benefits. These labor conditions are many cases dictated by insurance companies and Medicaid, not by the families receiving care.

The fact that consumers and caregivers both recognize that labor should be fairly valued “really does challenge this zero-sum notion that good jobs and affordable care can't coexist," says ALIGN policy analyst Maya Pinto. "And it suggests that people understand the connection between the quality of care and the quality of jobs."

The converse is also true: When workers are miserable, it shows up in their work. Nearly 40 percent of people receiving care complained that the quality of services was “fair” to “very poor.”

But from a workers' standpoint, this is the consequence of a job that treats them poorly. One worker described her situation bluntly: “It is a very difficult job at times because there are patients who think the home care workers are slaves.” Workers reported being subject to verbal and physical abuse, sometimes racial slurs, on the job.

Nonetheless, many care workers feel deep devotion to their job—they just want to their labor to be appreciated and duly compensated. “I do my work well…and the person I care for is very satisfied with my work," said one worker. "It is very dignified work but it needs to be paid better.”

A priority across all respondent groups was providing appropriate training and monitoring--indicating that workers, contrary to stereotypes, are not instinctively resistant to greater accountability and oversight, and that all stakeholder groups realize the depth and complexity of responsibilities involved in caring for vulnerable seniors.

One area of divergence between consumers and workers was the importance placed on career advancement. The issue was a higher priority for caregivers, especially domestic workers who serve seniors but lack the official credentials of “formal sector” workers—a category that includes certified “home health aides” and “home attendants,” and who are generally employed through an agency. Lacking the formal qualifications associated with specialized, better-paying positions, domestic worker-caregivers (who are disproportionately low-income immigrant women, both documented and undocumented) often remain stuck in the most grueling, precarious jobs.

Some of New York’s privately employed home care workers benefit from a recently enacted domestic workers' “Bill of Rights” that provides stronger workplace protections and wage standards than does federal labor law. However, domestic workers overall, who include nannies and housekeepers as well as direct caregivers in private households, still suffer from poverty, discrimination and exploitation. According to ALIGN's survey of caregivers' household incomes, about nine in 10 domestic workers earn less than $25,000 annually, compared to six in 10 formal sector workers. That is, despite the strides that domestic workers made with the Bill of Rights, in material terms, they still lag behind those employed through agencies or with more formal credentials.

ALIGN recommends several reforms to ensure dignity for both caregivers and people receiving care. More training and certification options--such as programs equipping domestic workers with emergency medical skills--would expand workers' access to more formal and higher-paying positions and lift up standards for the workforce overall. On a policy-making level, the report calls for a expansion of publicly funded insurance programs so care workers, many of whom cannot afford medical coverage, can safeguard their own health as they care for others.

Since so many families struggle to pay the cost of community-based elder care, especially if they fall outside the income-eligibility bracket for Medicaid, the report recommends a more comprehensive publicly supported insurance program as an alternative to private long-term care plans. Noting that the current rollout of the Affordable Care Act and Medicaid overhaul present an opportunity for fudamental reforms in home care funding, ALIGN suggests creating a broadly accessible long-term care benefit that would be funded through payroll contributions, like Social Security.

The report also highlights why workers need not just laws but organization and collective bargaining power. In recent years, SEIU and the National Domestic Workers Alliance have organized tens of thousands of workers to win fairer contracts for workers and to press for reforms to extend labor protections for care workers. Meanwhile, some workers are changing how care is delivered in their communities by forming their own cooperatives.

ALIGN cites the worker-owned cooperative model as a system that can empower caregivers, by enabling them not only to share in the ownership and profits of the enterprise but also to access training, negotiate better working conditions, and "improve compensation for workers while keeping the cost of care relatively low." One impressive case study is New York's Cooperative Home Care Associates, one of the country's leading cooperatives with about 2,000 workers, half of whom own a part of the business.

Despite the sometimes harsh conditions, Vilma Rozen, a 52 year-old home care worker, remains unshakably devoted to her job and embraces the challenges. “If you want to take care of elderly people, you have to keep your feelings very in touch [with] the person, because the elderly people in some cases are very alone and very depend[ent],” she says. At the same time, she adds, many seniors “suffer so much, because the home-carers, they have a very sad life, very underpaid... They don't have happiness.” Rozen, a native of Costa Rica, says that if Americans want to place their elders in the care of attentive, dedicated people, “they need to change the system.”

Whether they give or receive care, everyone wants dignity--both seniors and their aides want to look forward to seeing each other every day in a relationship of mutual respect. The labor issues in senior care show the consequences of neglecting shared needs, but also open space for creating a fairer system of care, by making the home a more welcoming workplace.