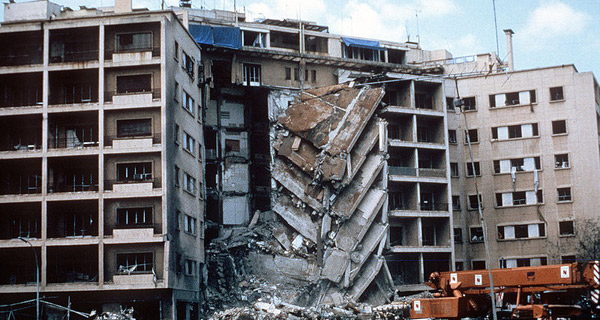 Attacks on U.S. embassies, such as the 1983 bombing of Beirut, underscore the risks often inherent in working as a Locally Engaged/Employed staff member. (Wikifreund / Wikimedia Commons)

The United States Department of State has a specific arm set up to promote the rights of foreign nationals it employs overseas: the State Department’s Office of International Labor Affairs (ILA). According to the State Department’s website, the ILA supports “internationally recognized labor rights relating to freedom of association, the right to collective bargaining, and the elimination of forced labor, child labor and discrimination.”

Despite this mission statement, the State Department has rebuffed efforts by foreign-born overseas workers to form unions, saying (controversially) in August that doing so would pose a threat to national security. However, Working In These Times has learned that at a private meeting with labor groups earlier this month, the State Department opened the door to collective bargaining by workers who perform critical services for the American government overseas.

More than 55,000 foreign nationals are directly employed by the State Department or other foreign agencies at American embassies around the world. These workers, known as Locally Employed/Engaged (LE) staff, do everything from gardening work to security. According to worker advocates, some perform work similar to that of the American diplomats, such as preparing reports on activities occurring in that country and processing visas. Because this work takes place on U.S. embassy grounds, activists feel that U.S. labor laws should apply to all embassy employees. But LE staff have still been denied the right to collective bargaining.

In 2009, a group of LE workers at foreign began to form the International Foreign Service Association (IFSA) to advocate for better working conditions. In early 2013, IFSA decided to link up with an American union housed within the AFL-CIO, the International Federation of Professional and Technical Engineers (IFPTE).

In interviews with Working In These Times, IFPTE union organizers working on behalf of IFSA described a host of problems experienced by LE staff, exacerbated by the fact that IFSA has no ability to formally represent workers' desires to the State Department. Workers involved with IFSA say that their health, benefit and wage plans vary from embassy to embassy based on the budget set by the chief of mission in a given country. Some say that they are paid dramatically less than American foreign service workers doing similar work. Another big complaint, IFPTE representatives say, is that each embassy has its own pension plan for staff, each of which is managed by the individual chief of mission, with inconsistent oversight and worker input.

Currently, according to IFSA, employees may only bring problems regarding work issues—including conditions, scheduling and oversight of pension plans—to the chief of mission in their country. There is no one in the United States they can contact if the mission chief does not address their grievances.

“These workers are in limbo. They go to the ambassador [chief of mission] and he says my hands are tied,” says IFPTE union organizer Chris Langford. “The overriding theme that I keep getting from these folks is [that] there [is] nobody responsible for addressing their issues and needs. There is no person responsible for the welfare of these employees who are scattered throughout the world. ... They have no access to the State Department in DC.”

For the past year, IFSA has been working with the stateside IFPTE to persuade the State Department to allow the workers to have a union, or, failing that, some approximation of one—-an association funded by dues deducted from workers' paychecks that engages in collective bargaining on their behalf.

In August, the State Department Chief Labor-Management Negotiator Steven J. Polson dismissed a meeting request from IFPTE and IFSA to discuss instituting a union. Many in organized labor were offended by his rationale: that any form of  aunion could jeopardize national security. Polson wrote:

Unionization at diplomatic and consular missions is fundamentally incompatible with the basic functions and operations of such missions. This would directly and significantly conflict with the authority of the diplomatic mission’s Chief of Mission and could frankly, put our foreign relations and national security at risk. If union rights were realized for LE staff, the exercise of such authorities or rights would pose a real security and counter-intelligence threat to the United States.

Even more dismissively, Polson refused to meet with IFPTE-ITSA to discuss collective bargaining or dues checkoff for their organizations. In his August 9 letter, Polson continued: “The Department has no interest in pursuing this discussion further. We have three major Federal Unions representing seven distinct bargaining units of direct hire Americans within the Department. If we sought any conversation about organizing LE staff, we might be obligated to approach any of them first.”

Outraged by the letter, IFPTE responded on August 12 that Polson’s argument about unions being a threat to national security “puts the Administration in the position of saying collective bargaining is somehow associated with disloyalty and un-Americanism."

In spite of Polson's resistance, IFPTE Secretary-Treasurer Paul Shearon was able to arrange another meeting earlier this month with high-level State Department officials: David Wade, the chief of staff for Secretary of State John Kerry, and Special Representative for International Labor Affairs Barbara Shailor. (Full disclosure: I worked for Shailor’s husband, Robert Borosage, at the Institute for America’s Future from 2009-2010).

Promisingly, the State Department seemed receptive to making changes to Polson’s stated policy at the meeting, according to Shearon and Langford, both of whom were in attendance.

The State Department pledged to work with IFPTE-ITSA to discuss problems with employees’ welfare and agreed to meet with them regularly, says Shearon. The department has also appointed Shailor, who previously worked as the Director of the International Department at the AFL-CIO, as its point person to address workers’ concerns, say both Langford and Shearon.

More importantly, Shearon and Langford say that Wade also apologized for the Polson letter, and that Wade called the letter "inappropriate.”

The State Department did not return Working In These Times' request for comment on whether an apology was given in the closed-door meeting.

Though the State Department plans to address workers’ expressed concerns, it also remains mum about whether workers who are foreign nationals will actually be allowed to unionize. It also has not yet agreed to meet with IFPTE-ITSA in any formal, regular capacity with set agendas to discuss specific problems.

Still, however, Shearon is optimistic. He says that the State Department can allow collective bargaining simply by issuing a new rule. “I don't think they knew that piece of policy was sitting there, it’s been sitting there for years,” says Shearon. “It’s an administrative thing that they can do internally.”