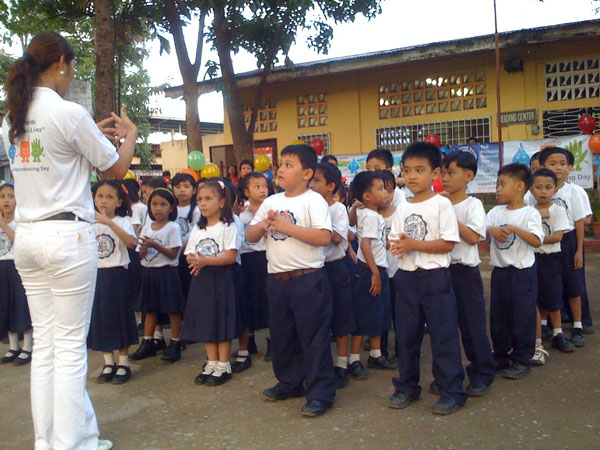 Between 2007 and 2009, 350 Filipino teachers arrived in Louisiana, excited for the opportunity to teach math and science in public schools throughout the state. They’d been recruited through a company called Universal Placement International Inc., which professes on its website to “successfully place teachers in different schools thru out [sic] the United States.” As a lawsuit later revealed, however, their journey through the American public school system was fraught with abuse.

According to court documents, Lourdes Navarro, chief recruiter and head of Universal Placement, made applicants pay a whopping $12,550 in interview and “processing fees” before they’d even left the Philippines. But the exploitation didn’t stop there. After the teachers landed in LAX, they were required to sign contracts paying back 10 percent of their first and second years’’ salaries; those who refused were threatened with instant deportation.

“We were herded into a path, a slowly constricting path,” said Ingrid Cruz, one of the teachers, during the trial, “where the moment you feel the suspicion that something is not right, you're already way past the point of no return." Eventually, a Los Angeles jury awarded the teachers $4.5 million.

Similar horror stories have abounded across the country for years. Starting in 2001, the private contractor Omni Consortium promised 273 Filipino teachers jobs within the Houston, Texas school district—in reality, there were only 100 spots open. Once they arrived, the teachers were crammed into groups of 10 to 15 in unfinished housing properties. Omni Consortium kept all their documents, did not allow them their own transportation, and threatened them with deportation if they complained about their unemployment status or looked for another job.

And it’s not always recruiting agencies that are at fault. According to an American Federation Teachers report, in 2009, Florida Atlantic University imported 16 Indian math and science teachers for the St. Lucie County School District. Labeling the immigrant teachers as “interns,” the district only spent $18,000 for each of their yearly salaries—well below a regular teacher’s rate. But because the district paid the wages to Florida Atlantic University, rather than the teachers themselves, the university pocketed most of the money, giving the teachers a mere $5,000 each.

Researchers estimate that anywhere from 14,000 to 20,000 teachers, imported on temporary guest worker visas, teach in American public schools nationwide. Such hiring practices are often framed as cultural exchange programs, but as Timothy Noah of the New Republic points out—in this case about Maryland’s Prince George County—“When 10 percent of a school district’s teachers are foreign migrants, that isn’t cultural exchange. It’s sweatshop labor—and a depressing indicator of how low a priority public education has become.”

School districts frequently justify hiring lower-paid immigrants by pointing to teacher shortages in chronically underfunded rural and urban school districts. And it’s true: In poorer areas, classrooms are often overcrowded and understaffed. But this dearth of instructors did not come out of nowhere. Rather, it is an inevitable result of the austerity measures pushed through on a federal, state, and local level after the panic of the 2007 financial crisis.

As the Center on Budget and Policy Priorities notes, between 2008 and 2011, school districts nationwide slashed 278,000 jobs. This bleeding has not stopped: According to the Center on Education Policy, almost 84 percent of school districts in the 2011-2012 school year expected budget shortfalls, and 60 percent planned to cut staff to make up deficits.

Thus, we see a familiar pattern of neoliberal “restructuring” in American school systems: Cut public institutions to the bone, leave them to fail without adequate resources, then claim the mantle of “reform” while rebuilding the institutions with an eye towards privatization.

In many cities, newly laid-off instructors are left to languish while their former employers employ underpaid replacements to fill the gaps. For example, the Baltimore City Public Schools district has imported more than 600 Filipino teachers; meanwhile, 100 certified local teachers make up the “surplus” workforce, serving as substitutes and co-teachers when they can.

The manufactured labor scarcity narrative, used to justify the importation of guest worker teachers, provides districts with the opportunity to employ less costly, at-will employees, whose precarious legal status is often exploited. Such moves to pump up the workforce with workers—not here long enough to invest themselves in organizing or bargaining struggles—also serve to weaken shop-site solidarity and unions’ ability to mobilize on a larger scale.

The recruiting contactors’ advertisements to districts are particularly instructive in this regard, noting their recruits’ inability to qualify for benefits and pension contributions. In an extensive study, education professors Sue Books and Rian de Villiers found that recruiting firms tend to appeal to districts on the basis of cost-saving, rather than classroom quality. As one Georgia contractor, Global Teachers Research and Resources, advertises, “school systems pay an administrative fee [to GTRR] that is generally less than the cost of [teacher] benefits. Collaborating with GTRR means quality teachers with savings to the school systems.” Even more egregiously, a Houston based recruiting firm called Professional and Intellectual Resources exclaims that their “bargain-priced” Filipino teachers can “make the most out of the most minimal resources.

This criterion for hiring makes sense in the context of what philosopher Paulo Freire calls “the banking concept of education.” In his 1968 classic, The Pedagogy of the Oppressed, Freire critiques the pedagogical tradition of rote memorization, in which the teacher-as-narrator “leads the students to memorize … the narrated content.” Freire argues, “It turns [students] into ‘containers,’ into ‘receptacles’ to be ‘filled’ by the teacher. The more completely she fills the receptacles, the better a teacher she is.”

However, Freire’s “narrative” is no longer even in the hands of teachers, who might at least have some understanding of content relevant to students. Instead with the rise of test-based approach to education, forced through with No Child Left Behind, Race to the Top, Common Core, and numerous ramped-up state tests, nameless corporate and federal employees now tie teachers and students’ success to the production of higher test scores. Thus, today’s cutting-edge education reform movement has brought this “banking concept of education” back into vogue, demanding “objective measures” and “accountability” through constant standardized testing.

The idea that new teachers should be imported from halfway around the world for yearlong stints, knowing no background about the communities they are entering and the content relevant to them, is only justified if the teacher is reduced to an instrument of standardized information transmission. And if teachers are just such instruments, why not search the global market for the cheapest, most malleable ones possible?

As Books and de Villiers point out, many recruiters’ advertisements reflect this logic: “Only two [recruiters’] websites apprise teachers of the socio-economic, racial, ethnic, and religious diversity in many U.S. schools. Only five include useful educational links, and only three provide information about school-based mentoring.” So for corporate recruiters and their district clients, finding the right match for a school is not about teacher quality or experience, but rather cost and expendability.

The phenomenon of teacher trafficking, then, doesn’t rest entirely on recruiters’ mercenary tendencies or districts’ drive to cheapen their labor. It also rests on the larger neoliberal conception of workers. In this case, teachers become moveable parts, switched out in accordance with the iron laws of supply and demand in order to more efficiently output successful test scores, whose value comes to represent students themselves.

Colonialism in the classroom

The American importation of Filipino teachers, as well as educators from other countries, has consequences beyond the United States, too. According to Books and de Villiers, several recruiting agencies only seek out teachers in the Philippines because its high poverty rates and supply of quality teachers make it, as one journalist from the Baltimore Sun put it, “fertile ground for recruits.” Meanwhile, the nation has an estimated shortage of 16,000 educators and the highest student-teacher ratio in Asia at 45:1.

As one Filipino union leader told the American Federation of Teachers, “To accommodate the students, most public schools schedule two, three and sometimes even four shifts within the entire day, with 70 to 80 students packed in a room. Usually, the first class starts as early as 6:00 a.m. to accommodate the other sessions.” And as American corporate forces have exploited the Philippines for its best teachers, pushed across the world by the beck and call of the market, agents of the nonprofit world have taken it upon themselves to send American substitutes in their place.

Launched last year, Teach for the Philippines presents itself as “the solution” to this lack of quality teachers in the country—a claim similar to those of its U.S. parent organization, Teach for America, a behemoth nonprofit that each year recruits thousands of idealistic college graduates to become (and often replace) teachers in low-income communities after a five-week training camp.

The Teach for Philippines promo video begins with black and white shots of multitudes of young Filipino schoolchildren packed into crowded classrooms, bored and on the verge of tears. A cover version of a Killers song proclaims, “When there's nowhere else to run … If you can hold on, hold on” as the video shifts to the students’ inevitable fates: scenes of tattooed gang kids smoking, an isolated girl and even a desperate man behind bars. In the midst of this grotesquely Orientalizing imagery, text declares, “Our Country Needs Guidance,” “Our Country Needs Inspiration,” and finally “Our Country Needs Teachers.”

Teach for the Philippines recruits young Filipinos both domestically and internationally, with special outreach to Filipino Americans. Though still in its start-up phase, with only 53 teachers in 10 schools, the program presents a disturbing vision for the future of teaching in the context of a global workforce. While the Filipino teachers imported to America are not necessarily ideal fits, given their inability to remain as long-term contributors to a school community, at least they are for the most part trained, experienced instructors. Within the Teach for the Philippines paradigm, however, Filipino students, robbed of their best instructors, are forced to study under recruits, who may lack a strong understanding of the communities they are joining and have often have never even had any actual classroom experience.

But Teach For the Philippines is just one growing arm of Teach for America’s global empire, now spanning the world sites in 33 countries and enjoying millions in support from neoliberal power players like Visa and even the World Bank. So while austerity-mode Western nations may seek to cut costs by employing no-benefits guest workers, countries such as the Philippines will be forced by the unbending logic of the market to plead for international charity—summer camp volunteers looking to “give” two years of their lives to really make a difference.

In the Pedagogy of the Oppressed, Freire argues, “It is to the reality that mediates men, and to the perception of that reality held by educators and people, that we must go to find the program content of education.” But for such a reality to be approached, teachers and communities must have the opportunity to grow together, to listen to each other, and to understand the reality that they seek to transform. By pushing teachers into a globalized pool of low-wage temp workers, teacher trafficking precludes this possibility.

George Joseph is a reporter focusing on education and labor issues in New York City. Follow him on Twitter at @georgejoseph94.