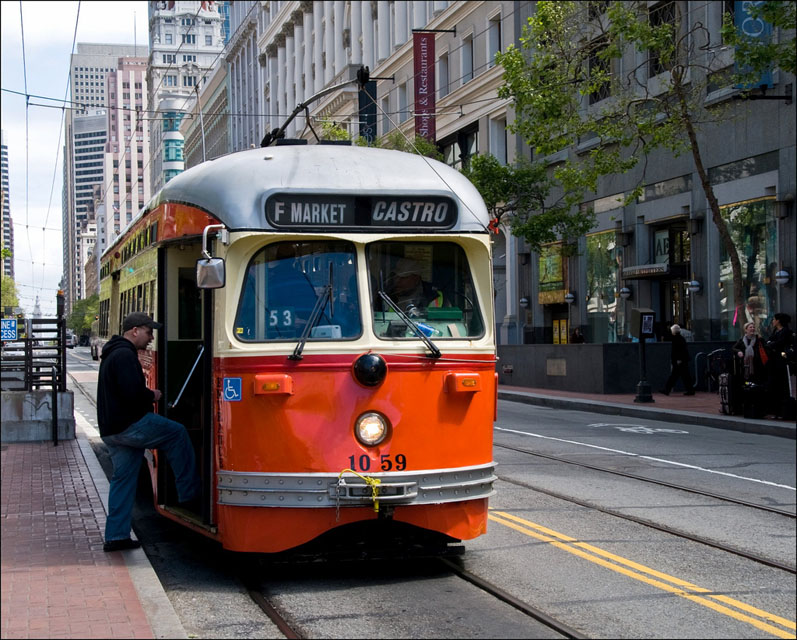 About half of San Francisco's city buses, light rail, cable and trolley cars are not operating today because of the transit operator sickout, which was launched to protest the city's latest contract proposal.   (Tony Fischer / Flickr / Creative Commons)

San Francisco commuters are being asked to find alternative transportation arrangements in Day 2 of a Muni driver sickout, affecting the operation of city buses, light rail, cable and trolley cars. Today, only 300 of 600 vehicles are operating, according to Muni spokesman Paul Rose.

Yesterday commuters scrambled to find ways to and from their destinations in the surprise sickout that left two-thirds of the Muni system buses non-operational. Forbidden from going on strike over contract negotiations, drivers called in sick again today despite a strongly worded memo from SFMTA last night that warned, “Operators engaging in an unauthorized work stoppage or ‘sick out’ are not entitled to receive paid sick leave and further, may be subject to discipline, up to and including termination.”

Muni spokesperson Paul Rose said in a statement yesterday that about 400 out of 600 morning runs—both buses and rail car—remained parked on Monday. SF Bicycle Coalition tweeted this morning “Ride your bike today to avoid any #Muni delays.”

The Transport Workers Union Local 250-A, which represents the 2,200 operators, is involved in a contentious contract dispute with the San Francisco Municipal Transportation Agency (SFMTA). The agency manages public transportation in the city, including Muni.

Workers overwhelmingly voted, by 1,198–42, to reject a contract proposal by SFMTA that would have raised wages but, the union says, would have cost workers overall by cutting city contributions to pensions. According to the union, over the past three years, drivers have received no pay increases, and they are paid less than their counterparts in Santa Clara (about an hour outside of San Francisco) and Seattle.

On Friday, operators rejected the latest offer by the City, which proposed a little more than 11 percent in wage increases over two years.

While that would raise their base wages to $32 an hour beginning July 1, they would be required to contribute 7.5 percent of their pay into their pensions—which are currently paid for by SFMTA.

The union released a statement on its contract negotiations that read in part: “SFMTA manager told workers throughout the bargaining process that any shift from the city’s pension contributions to a plan funded by individuals would be offset by wage increases and would be ‘cost neutral.’ However, even with wage increases of more than 8.05 percent proposed by SFMTA, drivers would experience a cut in their take-home pay. … Rather than improving wages and benefits, under the transit agency’s proposal, the vast majority of drivers would be paid less in real wages over the life of the agreement than they make now.”

Added TWU 250-A President Eric Williams: “This is a great city, but a very difficult place to operate a bus, streetcar or cable car. This also is a very expensive city, and while SFMTA’s ridership and revenues are on rising, the agency seeks to cut wages and benefits and convert full-time positions to part-time.”