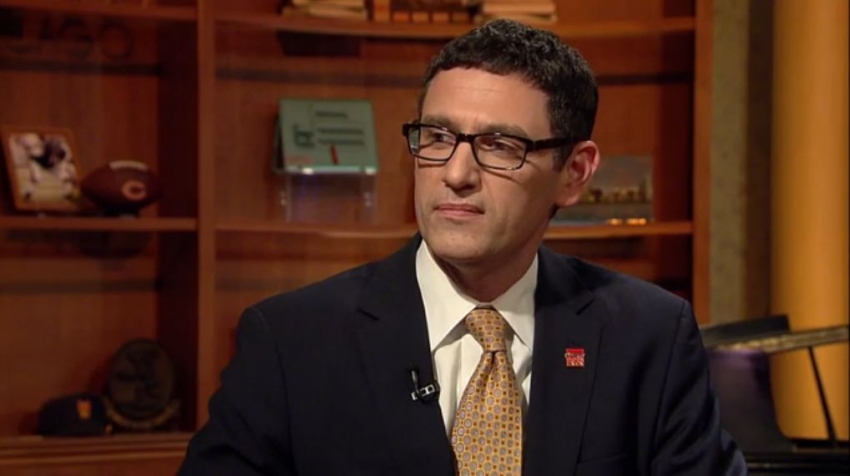 It may not seem very long ago that Chicago teachers were turning city streets into a sea of red shirts as they rallied for a fair contract during the 2012 strike. But new contract talks—and the possibility of another strike—are just around the corner. And this time the Chicago Teachers Union (CTU) has a new interim leader—CTU Vice President Jesse Sharkey, who is stepping in while Karen Lewis recovers from a serious illness.

Lewis' health issues have sidelined her from the upcoming mayoral race in the city, in which she was expected to make a progressive, populist challenge to Rahm Emanuel. But they have also elevated Sharkey during a critical juncture for the CTU: While still reeling from the closure of 50 schools last year, public education in Chicago is facing steep budget cuts and a major lack of resources, all as teachers prepare for another round of contract negotiations with the current contract expiring at the end of this school year.

In an interview with Chicago Tonight on Monday, Sharkey showed no signs of backing down from the fight that Karen Lewis has led for the past four years, while also acknowledging the impact of her absence.

People are sober. Obviously Karen was our standard bearer and the person who more than anyone else was in the public limelight. But there's a lot of resolve on the part of the people in the union. People understand that we have a mission to do, that we are fighting for the schools that children deserve in the city. We're fighting for the soul of public education. And we're going to keep doing that.

Some of the major demands Sharkey says the union will be making in contract negotiations include the proper staffing of schools (particularly regarding librarians and counselors), the funding of special education work, as well as a real commitment by city government to help alleviate the strangling poverty facing wide swaths of the city—concentrated in the largely African-American South and West Sides—by instituting more progressive taxation of the wealthy to fund public education, a policy long championed by Karen Lewis.

It’s very hard to teach a room full of 10 year-olds or 11 year-olds if they’re hungry or they’re wondering where they are going to sleep that night. And so we’d like to see the city make a real good faith effort to find some revenue—to take the people who have a spare $100,000 here or there to contribute to the political fund of the mayor and ask those people to pay their fair share of taxes. Ask the people on LaSalle Street to contribute to the wellbeing and the investment in the future for the schools. And we think that’s the way forward for the city.

In discussing his personal relationship with Mayor Emanuel, whom his predecessor had some well-known differences with, Sharkey was candid, and offered some words of advice.

I don’t have a relationship with the mayor, I can’t say I’ve ever had a personal conversation with the mayor. I will say that the mayor has really a lot of work to do in terms of regaining the trust not just of the union administration but really of public educators in the city of Chicago. There have been so many missteps that have been badly harmful to the public schools. Closing schools are just one example…This is a question of him needing to restore some credibility with the educators and in that regard actions are going to speak louder than words.

Though Sharkey doesn’t yet have much of a relationship with Mayor Emanuel, if his gutsy 2012 debate with Emanuel ally, venture capitalist and current Illinois Republican gubernatorial candidate Bruce Rauner is any indication—in which Sharkey blasts Rauner’s anti-union, corporate education reform agenda—Rahm’s life is not about to get any easier when it comes to dealing with the new head of the CTU.