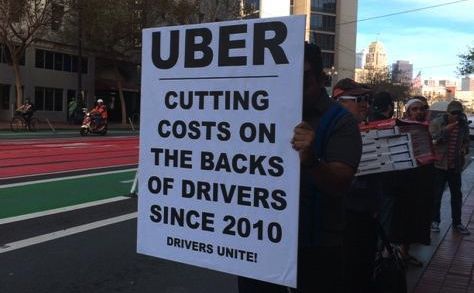 But on October 22, tech-giant Uber got a taste of its own disruptive medicine when drivers in at least five cities who work on the ridesharing platform turned off their apps and stopped picking up passengers, in protest of what they say are unjust working conditions and a dwindling share in the company’s profits. Some drivers are calling this action the first strike in the “sharing economy,” a sector known for its aversion to labor organizing.

A small crowd of Uber drivers and labor activists rallied outside the company’s offices in Santa Monica, California, at noon today, carrying signs reading “Uber: 15 Hour Days and Poverty Wages” and “Stop the War on Workers.” Drivers in San Francisco held a concurrent rally, while groups in New York, Chicago and London pledged to turn off their phones for three hours in what organizers are calling a “global day of protest” against Uber.

Another demonstrator’s sign asked, “Uber, are we your employees or your ‘partners?’” and demanded, “Stop imposing your unfair rules!” The question gets to the heart of the “sharing economy” controversy: Ask the tech companies that create “sharing” apps, and they’ll say that people who drive for Uber, rent out spare rooms on AirBnB or do small jobs via TaskRabbit aren’t employees at all; they’re “micro-entrepreneurs” or “partners” in a new kind of market.

Critics retort that these people are hardly “sharing” their time and resources out of the goodness of their hearts; rather they’re workers who have turned to a new niche in the service economy to try to make a living—and find themselves increasingly struggling to do so.

Uber has been a target of particular resentment because of recent fare cuts. In September, the company emailed drivers to say that a summer discount on its standard “UberX” service of between 15 and 20 percent, depending on the city, would be continued into the autumn. In an infographic accompanying an email to drivers in July, the company reasoned that the price cut would generate higher demand for rides, leading to more trips per shift and resulting, ultimately, in a boost to drivers’ bottom line.

Many drivers, however, were unconvinced. “I had an awesome day! I earned $5.33 an hour!” snarked one UberX driver on an online driver forum. Thanks to highway tolls and long trips to pick up passengers wanting to go only a few blocks, he explained, more rides hadn’t offset the lower fares.

On top of the lower prices, Uber has also demanded a larger cut of fares. New UberX drivers in San Francisco now hand over 25 percent of their earnings to the company; drivers for the more expensive Uber black-car and SUV services, which unlike UberX are operated only by professional drivers, surrender 25 and 28 percent, respectively.

After months of scattered unrest among Uber drivers, the California App-based Drivers Association (CADA), a labor group affiliated with the Teamsters, called for protests outside Uber offices in cities nationwide at noon on October 22. CADA was formed earlier this year in Los Angeles and has staged several protests there, but believed a coordinated outpouring of dissatisfaction would have greater effect.

“It shows Uber that drivers are speaking with each other, and it shows consumers and the shareholders that it’s not just one group of disgruntled or unprofessional drivers—there’s a problem nationwide,” says Joseph DeWolf Sandoval, co-founder and president of CADA.

Indeed, groups of Uber drivers in other cities quickly picked up the call. After learning about CADA, London Uber drivers opted to form their own association, the London Private Hire App-based Drivers Associations (LPHADA).

“London is one of the most expensive cities in the world,” says LPHADA member Yaseen Aslam, who has been driving for the company since UberX launched in London in July 2013. “It used to be that [drivers] could make a living working eight hours a day. Now, many are working 12 or more to make the same amount of money. That puts a strain on their health and family lives, as well as the safety of passengers.”

The association is calling on Uber to reduce its commission from 20 percent to 10 percent of drivers’ fares, add a tip option to the platform and consult with LPHADA before any further changes to fares or commissions, along with several other demands.

There are many challenges to organizing Uber drivers. In addition to their isolation and unpredictable schedules, both Aslam and DeWolf Sandoval believe a fear of retaliation keeps many drivers from complaining. Organizers in London and New York told In These Times that they had initially planned to stage protests, but fearing low turnout, they instead opted to focus on reaching out to drivers to strike by shutting off their phones.

“Uber can deactivate—basically, fire—a driver without cause or explanation. It’s a stick in the classic stick and carrot scenario, except there’s no carrot. The drivers live in fear,” says DeWolf Sandoval.

Uber acknowledges that if drivers’ ratings from passengers dip too low, they may not be allowed to continue on the platform. DeWolf Sandoval says that drivers have also been told that their ratings could drop if they decline too many ride requests or refuse lower-fare UberX rides when driving on the Uber Plus platform. He adds that several officers in CADA have experienced precipitous drops in their ratings or had their cars downgraded to the lower-fare UberX service, in what they suspect may be an attempt to chill driver organizing.

DeSandoval Wolf says that Uber has thus far refused to meet with CADA, and hopes that the protests will force the company to “recognize that drivers are attempting to organize, and that our organization wants to sit down and have a real conversation with Uber management.”

One Uber driver was even briefly fired for Tweeting a comment critical of the company. The driver received an email from an Uber operations manager informing him that his account had been permanently suspended “due to hateful statements regarding Uber,” though the company later reversed course after the story went viral.

A statement provided to In These Times by Uber said, "Four years ago, drivers simply didn’t have the economic opportunity they have today. Uber powers entrepreneurship and provides the tools for drivers to build their own small business - that is a fundamental and significant change from the status quo, where drivers start the day at least $100 in the hole just to rent their taxi."

At the moment, since Uber drivers are classified as independent contractors rather than employees, they are legally prohibited from taking the next step and forming a union. Many are waiting with bated breath for the outcome of a class action lawsuit, filed by San Francisco Uber drivers in August 2013, charging that they have been misclassified and are owed tips and expenses that would legally be due to employees.

In the meantime, drivers can do plenty to change the status quo, says New York Taxi Workers Alliance Executive Director Bhairavi Desai, whose umbrella organization the National Taxi Workers Alliance made history in 2011 when it became the first independent contractor workforce to affiliate with the AFL-CIO.

“There’s no question that the taxi industry is one of the most exploitive industries, and what Uber has done is magnify that exploitation,” says Desai.

By operating in a regulatory gray zone, Uber is able to offer cheaper fares in part by skirting the consumer and labor protections that bind traditional taxi companies. Cab drivers who believe Uber is undercutting their business have held several large protests against the company, including a multi-city European strike in June.

But Desai says that in New York, the two groups are now working together. Many traditional taxi drivers switched to Uber when its fares were higher and they believed they would be able to make more money. Now, once again facing low wages, many drivers are exporting the organizing model built up over years in the taxi industry.

“Taxi drivers, like Uber drivers, have been very invisible,” explains Desai, noting their isolation from each other and longtime exclusion from the mainstream labor movement. “We’ve really broken through that by having mass actions on the street and work stoppages, and that’s the same model that the Uber driver movement is utilizing.”

Drivers have debated back and forth whether to term their protest a work stoppage or “strike.” DeWolf Sandoval emphasizes that drivers will only be stopping work for a few hours, but hopes to send a clear message to the company.

“If we’re not driving, I don’t think Uber managers are inclined to hop in their cars, put X’s on the front and shuttle people around L.A.,” he says.

Aslam believes the action amounts to a strike by Uber drivers.

“At the end of the day, it is the drivers who make Uber successful,” he says. “Without them, Uber’s technology is useless.”