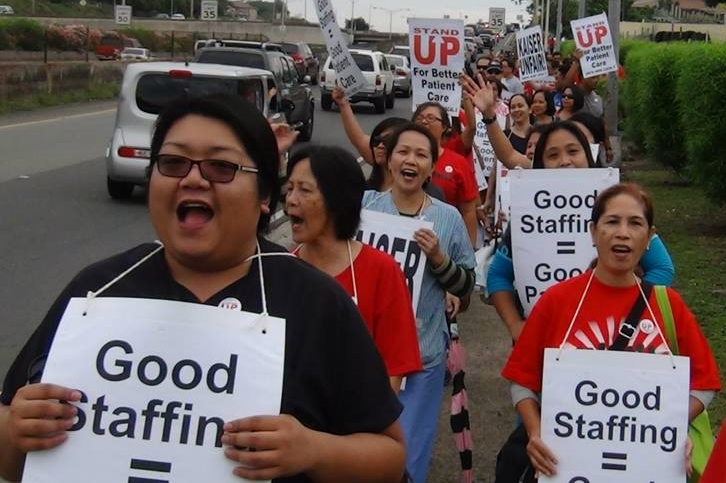 Kaiser health care workers have stood up to the health care giant over issues ranging from proper staffing to pensions.   (Unite Here Local 5)

Mary Ann Barnes, the newly arrived president of health care giant Kaiser Permanente in Hawaii, recently informed hospital workers that the world figure she most admires is the late Mother Teresa—because of “her humanity and selflessness.”

Pictured wearing a lei around her neck, Barnes explained in the company newsletter that her top management priority “is to make sure that the work environment is as good as it can be … so that everyone can love what they do.”

For spreading such good island vibes, Barnes earns nearly $1 million a year. Like other top Kaiser executives on the mainland, she’s eligible for multiple pension plans.

On September 24, several hundred members of Unite Here Local 5, including those who work at Kaiser clinics and hospitals, tried to meet with Barnes about their pensions, arriving on three buses from a union convention site in downtown Honolulu and spilling out in the parking lot just below Barnes’ window.

Wearing red union t-shirts, the protestors began chanting: “I don’t know but I’ve been told, Kaiser’s got a pot of gold. And if they don’t give it up soon, we’ll be marching here ‘til June!”

A smaller rank-and-file delegation went inside to ask Barnes why Kaiser is trying to curtail group pension coverage if it wants to improve the “work environment” for 2,000 Local 5 members?

Having helped generate more than $4.8 billion in profits for Kaiser in the last 18 months, these Hawaiian health care workers want a new contract that doesn’t force new hires into riskier, cheaper 401(k) retirement accounts. Unfortunately, Barnes was tied up in a meeting elsewhere—and thus no more responsive than other Kaiser officials during 2 and ½ years of stalled negotiations. Last January, management presented Local 5 negotiators with a settlement offer they claimed was Kaiser’s “last, best and final.”

Rejected by the union, this package included no retroactivity and the lowest wage increase that the hospital chain has proposed for any of its U.S. regions. Management wants to deny defined benefit pensions to any newly hired service and technical workers. Kaiser also insists that current employees, who remain eligible for existing coverage, should work more hours to qualify for it. In the months ahead, Kaiser may try to declare a “bargaining impasse” and impose these new conditions unilaterally.

To fend off this fate, Local 5 has done some very creative membership education and mobilization, worthy of emulation elsewhere. At Kaiser in Hawaii, Unite Here sets the highest standard for wages and benefits in the entire health care industry, benefiting both its own members and fellow workers at other hospitals. The union’s multi-faceted campaign to defend retirement security has also engaged the 8,800 workers it represents in resort hotels.

“Management’s plan is to divide and conquer, “ Local 5 Organizer Marsha Bruhn says. “If Kaiser succeeds in taking away pensions from new hires and then takes away the pensions of current employees, what will happen to the pensions of our hotel members in Hawaii?”

Savvy Use of Social Media

Local 5 has produced an excellent animated video about what’s wrong with pension plan changes that pit young against old and leave new hires dependent on 401(k) coverage rather than a real pension, entitled “Kaiser Permanente, We're Not ‘Little Hawaii!’"

As Kaiser worker and Local 5 member-organizer Jonah Pascual explains to his co-workers, "Our defined benefit is concrete. It’s the employer’s responsibility to make sure the money is there and they can’t touch it. But they’re trying to switch over to a defined contribution approach. …With that, they put in the money, but whatever happens, happens. You never know what’s going to be in the pot when you retire."

Local 5 calculates that future members who work for Kaiser will lose at least $1,200/month when they retire at age 65 if Kaiser gets the givebacks it wants. “What’s Your Number?” became the question of the day, as union activists helped their co-workers do the individual pension calculations necessary to understand how plan changes would adversely affect new hires or them, now or in the future.

Local 5 stewards have organized a series of colorful workplace actions. Organizing around the theme, “Don’t Blow Your Pensions,” Kaiser workers spent a day blowing soap bubbles at work. To urge co-workers: “Don’t be a sucker: Fight for your pension!” they handed out union-label lollipops.

This educational work paid off in June when nearly 130 rank-and-file members, joined by their high school-age children, packed an open bargaining session with Kaiser. The observers carried “Don’t Touch Our Pensions!” signs and applauded wildly at co-workers’ personal testimony about their pension needs.

Kaiser workers also took their key contract campaign issue to the state convention of the Democratic Party last May. There, hundreds of delegates and elected officials were enlisted as supporters.

Local 5 also ran one of its own, Joli Tukusato, to run for a seat on the Honolulu City Council. While she was not elected this time around, Tokusato’s first-time campaign for elective office engaged scores of Local 5 political volunteers and enabled her to speak about a range of union issues including the community’s stake in maintaining good job-related benefits.

Local 5 has also been a main sponsor of AiKea, a two-year-old community-labor coalition which campaigns for “good secure jobs in Hawaii with decent wages, full family medical and a guaranteed pension.”

According to Kaiser worker Gloria Allen, “patients are not getting the quality care like we had before and they’re paying more for it.” So Local 5 is considering the introduction of legislation that would increase Kaiser’s financial transparency and limit its ability to hike consumer rates while maintaining cash reserves in excess of $30 billion.

Another union-backed bill may seek improvements in Kaiser mental health coverage, much contested now in California due to failings documented by the National Union of Healthcare Workers (NUHW) that resulted in a state-imposed $4 million fine.

Already, Local 5 members have lobbied the Hawaii legislature on behalf of SB 2054, a bill that would require all state-regulated health plans to expand their coverage of young people with autism spectrum disorders—a measure opposed by Kaiser.

“Kaiser has attacked its own workers and its core clients at the same time,” contends Local 5 secretary-treasurer Eric Gill. “Union groups have been its core constituency” but now face double-digit rate hikes in Hawaii. This has already led Teamsters Local 996 to drop Kaiser as a hospital/HMO option for its members and take $10 million of annual health and welfare fund spending elsewhere.

Like the Teamsters, Local 5 operates its own health insurance fund, jointly administered with hotel industry representatives. So Unite Here has used that leverage to restrain Kaiser’s price gouging that would otherwise have adversely affected both its Kaiser and non-Kaiser members.

Members have also targeted Kaiser’s board, including current members like Edward Pei, who also serves as head of the Hawaii Bankers Association. Local 5 and its supporters have leafleted the Bank of Hawaii, taken up the cause of low-paid bank tellers and confronted Pei personally—all to keep the pressure on a top Kaiser decision-maker.

These “minority strikes” involved select groups of workers, from only a handful to more than 400, in multiple departments. One walkout last year was in response to several workers being written up for participating in an earlier strike.

From Cooperation to Conflict

When California industrialist Henry J. Kaiser came to Hawaii in the late 1950’s, such labor-management discord was not what he envisioned. Kaiser built what is now the Hilton Hawaiian Village and brought Kaiser Permanente from the mainland, where it was a pioneering, labor-oriented pre-paid medical plan with its own health care facilities. Kaiser’s recognition of Local 5 in both hospitality and healthcare—like the creation of the Kaiser Labor-Management Partnership (LMP) in the mid-1990s—reflected a corporate decision to work with the union instead of fighting it.

At the time, Local 5 was headed by Arthur Rutledge, a conservative business unionist who also ran Teamsters Local 996. Rutledge’s son became his successor until he was ousted from Local 5 by reformers led by Eric Gill in a narrow election victory in 2000. Gill inherited a local whose treasury was depleted and its finances a mess.

After fending off a Rutledge family-led attempt to decertify Local 5 in its Kaiser unit, Gill began systematic rebuilding of the local. Its steward structure was revitalized and helpful advisors from HERE (before its 2004 merger with UNITE to form Unite Here) were imported from the mainland to aid contract negotiations and strikes.

In 2004, with help from SEIU Local 250, later known as United Healthcare Workers (UHW), Local 5 won retiree medical coverage at Kaiser and persuaded the employer to join its healthcare trust. As a non-partnership union, however, Local 5 members say they have been excluded from “unit-based teams” that include RNs represented by the OPEIU-affiliated Hawaii Nurses Association (HNA), which is part of the Labor-Management Partnership.

Caregivers in Local 5 were free to blow the whistle on Kaiser staffing cuts in its out-patient clinics last year. HNA officials went along with this move and now face internal opposition in upcoming union elections.

Top Kaiser executives remain on close terms with the leadership of UHW/SEIU, but Local 5 has not. In California, UHW represents a service and technical unit of 45,000 members, including many of the equivalent jobs to those represented by Unite Here in Hawaii. UHW’s current leadership was installed by then-SEIU President Andy Stern when he trusteed the local in 2009, removing the elected officers who had assisted Local 5. These activists became founders of NUHW, which was excluded from the LMP.

Adams apparently didn’t propose any cut in his own $2.2 million salary or reduced pension coverage for himself. Instead, with the shortsighted acquiescence of its partnership unions, Kaiser hopes to extract costly benefit concessions from its smaller, non-LMP unions. These givebacks would then establish a pattern for contract concessions by the 90,000 or more workers in the coalition of LMP unions, which SEIU dominates.

“There is no strong national health care union,” Gill noted at Local 5’s convention last month. “There was one, but it got turned around.” The role of UHW/SEIU, which he called a “sellout union on the mainland,” has made defending pensions at Kaiser much more difficult.

The main obstacle to Kaiser’s divide-and-conquer strategy is the continuing resistance of three groups: Local 5 in Hawaii, 4,000 NUHW-represented Kaiser workers in California and hopefully the CNA’s 18,000 Kaiser members, who began negotiations over the summer. On October 16, they rallied, by the hundreds in Oakland after a bargaining session on workplace health and safety issues, which focused on CNA proposals for handling patients with Ebola.

Based on the recent Kaiser experiences of NUHW and Local 5, defending RN pensions will require the same highly focused approach.