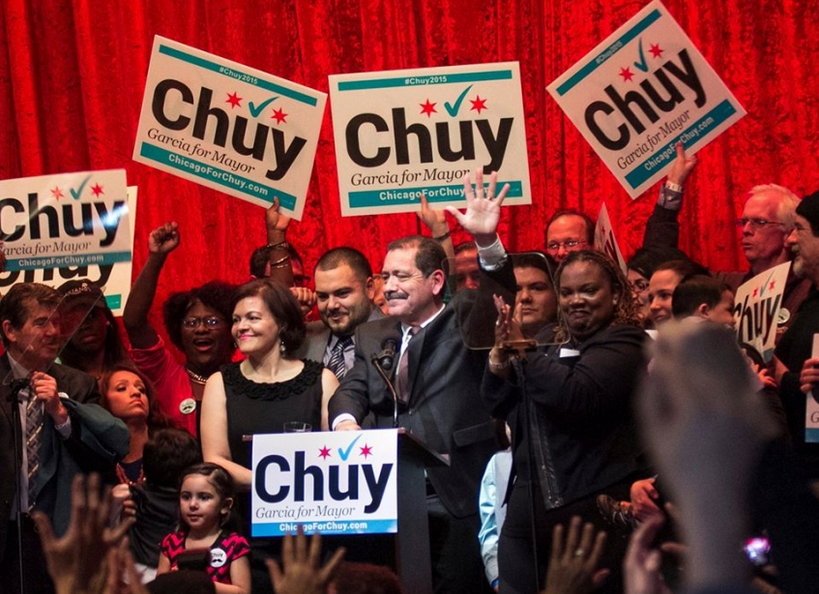 The SEIU Illinois State Council has decided to endorse Jesus "Chuy" Garcia in his run against Rahm Emanuel for mayor of the City of Chicago, reversing the council's previous decision to remain neutral in the race—and overriding the desires of SEIU Local 73 to maintain that neutrality.

The Chicago Tribune reported this afternoon that while an official announcement of the endorsement would come tomorrow, the council had made the decision today. Jerry Morrison, a "political operative" at Local 1, told the paper, "We usually play to win in politics, and [the union's involvement in the race] will be significant."

Not all SEIU staffers were pleased with the decision. Matt Brandon, Secretary-Treasurer for Local 73—whose union had previously filed an internal cease-and-desist request against HCII for its endorsement of Garcia—said his local attempted to block the vote. "We raised several objections at the meeting to procedure and rules, but of course we were overruled," Brandon told the Tribune before accusing the other two locals of being radicals:

"They are trying to create more of a socialist agenda," Brandon said, while his local is trying to take more of a realist approach. "I just think the mayor has done a lot for our members."

Similarly, in early March, Brandon told In These Times he "totally disagree[d]" with the widespread characterization of Emanuel as an anti-union mayor, saying Local 73 had been able to secure key gains from the mayor.

The endorsement comes as a number of unions and community leaders are rethinking their decision to sit out the mayor's race after Garcia and three other candidates unexpectedly forced Emanuel into a runoff late last month. Last week, Teamsters Local 743 decided to endorse Garcia, as did key African-American leaders including Rev. Jesse Jackson and Rep. Danny Davis earlier this week.

SEIU's Illinois State Council is made up of three SEIU locals in Chicago and throughout the state: Health Care Illinois Indiana, which represents home health workers; Local 1, which represents building services workers like janitors; and Local 73, which represents public sector workers. HCII had previously endorsed Garcia and given him multiple large donations, defying the council's vote of neutrality; Locals 1 and 73 had pledged neutrality in the race, but Morrison told the Chicago Sun-Times after Emanuel was forced into a runoff that "this is now a different election."

The large majority of the city's unions either stayed neutral or sided with Emanuel in the first round of the race. UNITE HERE Local 1, which represents hospitality workers in Chicago, could be seen directly behind the mayor as he gave his election night speech.

Most of the city's labor movement still has not come over to Garcia's side. But the decision of several key locals to move to his side in the last few weeks leading up to the runoff could provide a much-needed boost of financial resources and boots on the ground for the progressive challenger, who is reported in a recent Tribune poll to be trailing Mayor Emanuel by double digits.

In January, In These Times's David Moberg explained why the majority of the city's labor movement was sitting out the race. Moberg noted, however, that there was a chance union leaders might be willing to shift their position.

But some may jump into the race if Garcia’s campaign takes off. Sources familiar with the thinking of SEIU Local 1’s leaders say there was enthusiasm for [Cook County Board President Toni] Preckwinkle and [Chicago Teachers Union President Karen] Lewis, but less for Garcia—even though they see him as a friend—because he entered the race so late that his campaign does not seem viable. “If Chuy were even 30 percent viable, we’d be with him,” one source said. “Nothing would make us happier than to take Rahm out. But we’re not tilting at windmills. If we’re going to take a shot at the king, we’ve got to kill him.”

Some of the city's union leaders appear to think they may stand a chance at taking the king out, after all.