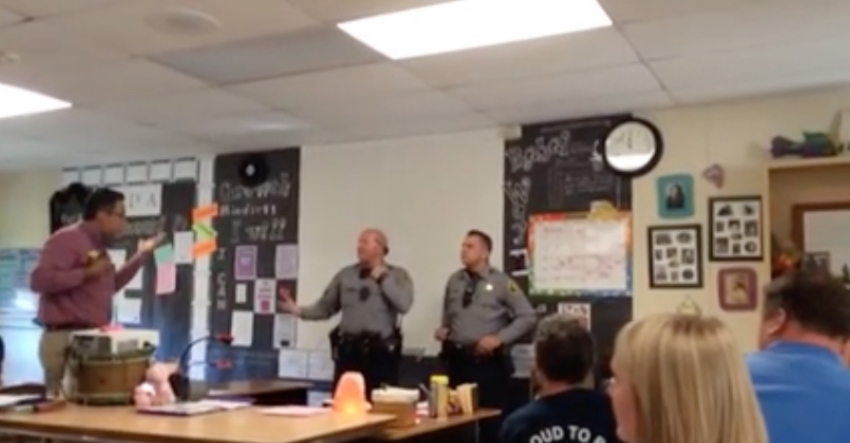 In a video widely circulated on social media, Alameda County sheriff’s deputies can be seen interrupting a lunchtime union meeting held at San Lorenzo High on October 20 for local teachers in the midst of a contract bargaining dispute with their employer, the San Lorenzo Unified School District (SLUSD). The deputies, there at the request of a vice principal, entered the classroom where the meeting was being held and asked a California Teachers Association (CTA) representative leading the meeting to leave campus.

The next day, October 21, CTA filed an unfair labor practice charge with the Public Employees Relations Board against SLUSD, arguing that the school district had violated California state labor law. Guillermo Durgin, the CTA staff organizer speaking with the deputies in the video, told In These Times, “By trying to keep me out of the classroom, and then trying to interrupt our union meeting, the district is essentially intimidating and preventing members from communicating with their exclusive bargaining representative about the impasse that had been declared.”

The CTA-affiliated San Lorenzo Education Association (SLEA) has been in collective bargaining negotiations since March, but reached an impasse on October 13. Durgin was invited on to campus by SLEA members to inform San Lorenzo High educators about the bargaining situation during their off-duty lunch hour break.

After signing in as a visitor at the school’s office, Durgin says he was approached by assistant principal Andrew Vavuris. He claims that he identified himself as a union representative with the California Teachers Association, informing Vavuris that he had signed in and why he was there.

“He proceeded to tell me that I did not have the right to be there and I need to leave. I proceeded to tell him that I actually did have the right to be there as a representative of their exclusive bargaining representative,” he says. “About 15 minutes later—fortunately we had gone through most of our agenda—the assistant principal returned with three Alameda County Sheriff, and they proceeded to interrupt our union meeting, saying I had to leave. After a minute of this one of our members started to record.”

After the video stopped recording, Durgin says, “At that point, I pretty much ignored the three Alameda County Sheriffs as well as the assistant principal, left the classroom, signed out and proceeded to my car. I noticed though that the assistant principal actually followed me to my car… just to make sure I was going to leave the school campus.”

In an email to In These Times, SLUSD superintendent Fred Brill says that what transpired in the video, which has been seen over 280,000 times, was a result of a “misunderstanding” and that “the assistant principal should not have interfered with the meeting.”

With negotiations at an impasse, a state-appointed mediator has met with SLEA and the school district twice, bringing the almost 600 members of SLEA close to a potential work stoppage. The union says that its main concerns lie in the district’s inability to recruit and retain educators due to low salary levels and the subsequent high class sizes that come with no hiring. An October 23 press release by SLEA claims that the 2015-16 school year “started with more than 25 unfilled educator vacancies, four times as many as two neighboring districts in Castro Valley and San Leandro. More than 70 educators left the district at the end of last school year—30 of them going to higher-paying school districts.”

SLEA president Donna Pinkney says in the statement, “The school board and Superintendent Brill are refusing to make a long-term investment in teachers by making competitive salaries a budget priority, and that’s harming the students and the community. Teachers are leaving the district for better pay and more respect in neighboring districts. Interfering with our union rights will not be tolerated here.”