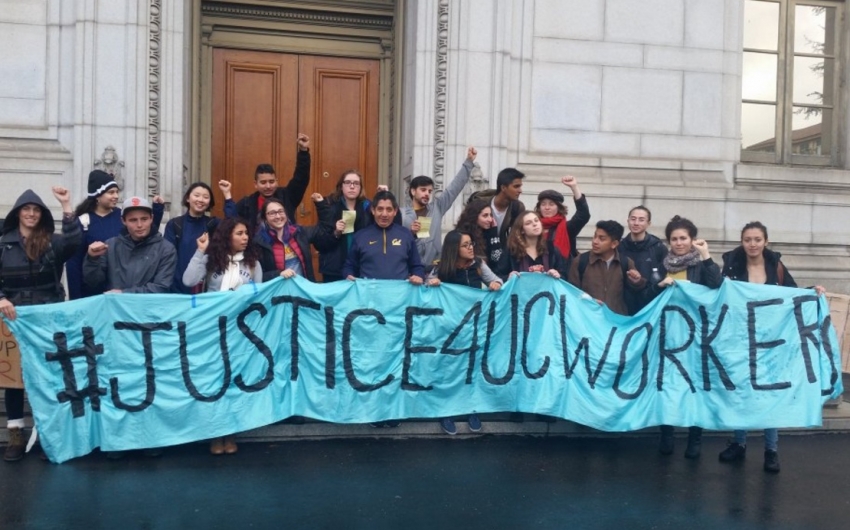 Twenty-two student protesters were arrested on December 3 after staging a two-hour occupation of the central administration offices at the University of California, Berkeley.

The protesters, 50 members of a campus-based organization called the Student Labor Committee, stormed California Hall, where school head Chancellor Nicholas Dirks is headquartered, and sat down in the office lobby demanding living wages and benefits for workers employed by private contractors on campus.

The practice of outsourcing, mostly with workers from communities of colors in the Bay Area, is detrimental both to those workers and campus workers directly hired by the university, according to campaign advocates. AFSCME Local 3299, the system’s largest employee union, said in August that UC management currently holds contracts with “at least 45 private contractors employing thousands of subcontractors who perform the same work as career UC employees—such as custodians, security officers, parking attendants, and food service workers.” Researchers at UC Berkeley’s Labor Center have examined the problems of subcontracted labor at length in recent years, concluding that outsourcing arrangements drag wages down to levels that make subcontracted workers twice as likely to enroll in public assistance programs.

The public pressure built up over both the Fight for 15 and the campaign for SB 376 coincided with UC President Janet Napolitano’s directives for minimum wage increases that have brought the current wage to $13 as of this October, moving to $15 by 2017. A $13 minimum wage, however, puts subcontracted UC workers at the same level as the median wage for subcontracted workers across the state,  the UC Berkeley’s Labor Center calculates. Already in the expensive Bay Area, Berkeley contractors are a part of the nation’s working poor.

SB 376, a state bill celebrated by labor activists and meant to fix the problem by requiring equal pay for equal work between subcontractors and their UC equivalents, came across Governor Jerry Brown’s desk in early October. State Senator Ricardo Lara, a Democrat who introduced the legislation, wrote in a Sacramento Bee op-ed in June, “On poverty, and especially poverty created by private firms profiting from business with California’s public institutions—doing nothing is simply not an option.” (Governor Jerry Brown vetoed the bill, saying that he was “not prepared to embrace [its] provisions.”)

Student Labor Coalition members staged the sit-in at California Hall as a part of their campaign called “Justice 4 UC Workers,” saying in a statement before the occupation: “A broad coalition of students demands that their tuition dollars no longer fund racism and injustice at the UC. And they will continue to campaign with increasing intensity until UC Berkeley’s hiring practices adhere to the values embodied (and advertised) by an elite, progressive university.”

According to a University of California Police Department statement, the students were charged with trespassing and interrupting a lawful business, both misdemeanor offenses. Kristian Kim, a fourth year undergraduate majoring in Peace and Development Studies and SLC member, says the police presence—which she describes as about 25 officers wearing bulletproof vests and threatening to use chemical agents—“exposed the fact that the privatization of higher education has come with militarization as well, for protecting capital and for protecting the interests of administrators.”

The occupation is the latest escalation in a series of actions that started when 51 subcontracted parking attendants and custodians went public with the “Justice 4 UC Workers” campaign on the eve of September 2015. SLC members and workers representing allegedly 90% of workers at ABM, Performance First Building Services and LAZ Parking—3 different private companies currently doing business with the university—delivered petitions to university stakeholders in August demanding that the contracted workers be “insourced” instead as UC direct employees.

Antonio Ruiz is a parking attendant since 1994 whose job is subcontracted out to a private company. “The way the UC treats me, it’s like they don’t respect me,” he says. UC workers doing the same job make significantly more money and earn strong benefits, he says—unlike subcontracted workers.

Ruiz says he had to find a second job since the compensation from his private parking company job wasn’t enough for his family.  “I’m working 14 hours a day, I get in at 7 in the morning and then I get home at 11 o’clock. I don’t see my kids. When I get there, they’re already sleeping. I can’t help them with their homework. They don’t see me, it’s like they don’t have a father. It’s really frustrating for me.”  Reyes and other co-workers at LAZ Parking have filed a wage theft claim with California Labor Commissioner against their employer that is still pending.

In a request for comment after the occupation, a university spokesperson told In These Times, “Individuals working under a contract with a firm are free to apply for positions as university employees, just as any interested applicant would do,” echoing what UC Berkeley labor relations director Debra Harrington reportedly told petitioners upon delivery of their insourcing demands.

The only statement from Chancellor Dirks came by way of an op-ed he authored that featured in the campus newspaper, the Daily Cal, which he titled “Campus staff professionals deserve infinite gratitude.” Dirks, who built his career on the study of tiered systems of oppression in British colonial India, wrote, “I hope you’ll join me in taking time to more intentionally acknowledge and support the work our staff professionals do. They may often be behind the scenes, but they are crucial to running the show.” Dirks is no stranger to the Student Labor Committee by now; in early November, the group led 150 people toward the Chancellor’s home, jumping over a fence and approaching his residence during a rally.

“I support [the students’ sit-in] because they are fighting for us. They know about the injustice in our jobs,” says Juliana Robles, a custodial worker who petitioned to be insourced back in August, in Spanish. Robles was employed at Performance First, servicing UC Berkeley football games with custodial work, before allegedly being fired for organizing her co-workers. Performance First is currently under investigation by the Department of Labor after allegations of wage theft, what Robles describes as consistent denial of overtime pay.

AFSCME 3299 representatives have likened the current campaign to one conducted at UC Irvine in 2011, when occupations and public pressure culminated to the insourcing of 100 previously subcontracted jobs. Regulatory and public pressure could result in change of practices at the UC and a student-labor partnership should make a difference, according to activists.

“Together, students and workers are the largest constituency of the university,” Kim says. “We are the ones that make it function on a daily basis, and we’re the ones can shut it down. Learning to leverage that power in the service of justice is a really important aspect of our education here. It is a responsibility that we cannot ignore.”