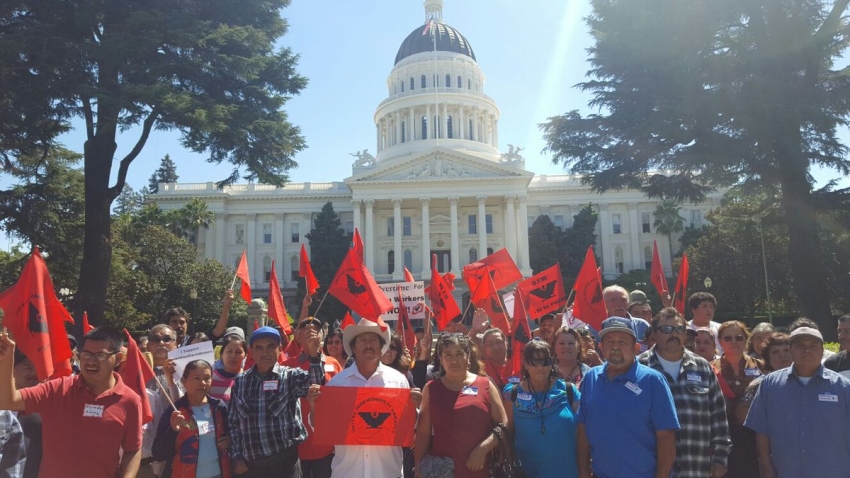 Nationwide, almost all farmworkers are exempt from overtime thresholds thanks to agricultural worker exemptions in the Fair Labor Standards Act of 1938. (United Farm Workers/ Twitter)

California just approved the strongest overtime pay legislation in the nation for farmworkers, long exempt from overtime standards mandated for most other occupations.

The legislation, known as AB 1066, was signed into law this week by Gov. Jerry Brown and will eventually result in time-and-a-half pay for farmworkers who work more than eight hours a day or 40 hours a week.

“This bill corrects 78 years of discrimination, not just in the state but in the country,” says Juan Garcia, an internal coordinator with the United Farm Workers (UFW). “Most of the people that I’ve talked to here in Sonoma that have worked 30, sometimes 40 years—they’ve been waiting for something like this.”

Nationwide, almost all farmworkers are exempt from overtime thresholds thanks to agricultural worker exemptions in the Fair Labor Standards Act of 1938. The law excluded farmworkers in order to appease Dixiecrat leaders who objected to minimum wage and overtime federal standards for the mostly black farmworkers of the time.

While California eventually established overtime pay in 1976 for farmworkers who work more than 10 hours a day or 60 hours a week, AB 1066 author Assemblywoman Lorena Gonzalez (D-San Diego) says the existing protections were not enough.

“Even though we’ve brought them up further in California than other states have, they still weren’t on equal footing and were viewed differently under labor laws, so I thought it was extremely important (to introduce AB 1066) because these are some of the hardest working folks in California, under some of the hardest conditions,” Gonzalez tells In These Times.

Under AB 1066, the state will reduce the overtime threshold by half an hour every year, starting in 2019, until it reaches the 8 hours a day or 40 hours a week standard in 2022. AB 1066 affects the roughly 800,000 farmworkers in California, one-third of all agricultural laborers in the country according to 2014 estimates by Philip Martin, professor of agricultural economics at the University of California, Davis. These workers earn, on average, between $16,500 and $19,000 a year, according to Martin and other researchers at UC Davis. When employed by farm labor contractors, instead of growers directly, farmworkers, on average, earn even less—an estimated $12,719 per year. The California Research Bureau reports that approximately 30 percent of California households with farm laborer incomes are below the poverty line.

Moreover, the share of undocumented workers performing farm labor in the state is so high (Martin’s 2014 estimates put it at 67 percent), that enforcement of overtime pay takes an additional “burden” according Kent Wong, director the Labor Center at the University of California, Los Angeles.

“The unfortunate reality is that in the research that we have conducted, with regards to wage theft, it is very common for employers of undocumented immigrant workers to take advantage of these workers, given their precarious status, and to not respect the law,” Wong tells In These Times.

In the days leading up to AB 1066’s passage, UFW, the bill’s co-sponsor, organized emotional demonstrations by farmworkers in Sacramento, the meeting place of the state legislature.

“They were the only voice, organized voice, for farmworkers in the state,” says Gonzalez. “They are the front lines, they work with these workers every single day, they organize these workers, they empower them, and they were able to bring a real face to the discussion.”

Gov. Brown’s signature comes six years after his Republican predecessor, Arnold Schwarzenegger, vetoed a similar bill. Although Brown’s first tenure as California governor between 1975 and 1983 had seen him enact first-in-the-nation legislation that institutionalized collective bargaining rules for agricultural workers, since returning as governor in 2011, Brown has vetoed several pieces of legislation that would have helped strengthen the UFW’s ability to organize workers. In 2011, he vetoed a bill allowing the state’s Agriculture Labor Relations Board to implement union contracts after mandatory mediation between the union and growers. In 2014, Brown vetoed card-check legislation for farmworkers that would have made organizing without an election far easier.

U.S. Secretary of Labor Thomas Perez, celebrated Gov. Brown’s signature on AB 1066, as well as the extension of expiring overtime provisions for nannies and homecare workers who more than nine hours a day, saying in a statement, “People who work on farms and in our homes are some of America’s most vulnerable workers. We all depend on their work to feed and care for our families, but far too often they can’t afford to put food on their own dinner tables.”

“The Governor has set in motion a chain of events that will cause workers in our fields to lose wages,” Nassif says. “California farmers will have no choice but to avoid even higher costs of production and they will utilize a number of strategies, including reducing work shifts and production of crops that require large numbers of employees.”

When asked about such claims, Gonzalez says “we’ve heard that argument time and time again,” adding that the arguments should be taken with “a grain of salt” as they are “talking points of corporate America.”

“There is a lot of work to be done. There’s a shortage of farmworkers and so we feel pretty confident that they’re going to continue to have robust hours and, in fact, are just going to make more money,” says Gonzalez.