Trump’s Pick for Labor Secretary is Literally the Worst 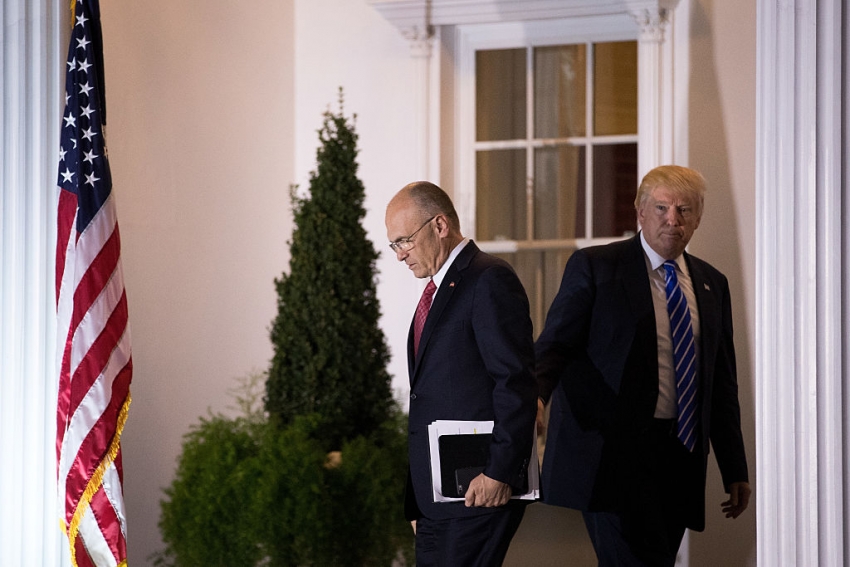 Andrew Puzder, 66, has made a career out of taking advantage of workers. (Photo by Drew Angerer/Getty Images)

President-elect Donald Trump is wasting no time laying waste to his campaign promise of standing up for working people.

This is no more evident than in who he picked to be labor secretary—Andrew Puzder, chief executive of CKE Restaurants, parent company of fast-food chains Carl’s Jr. and Hardee’s.

“Mr. Puzder’s long track record inspires deep skepticism,” said AFL-CIO president Richard Trumka. “It’s a track record that raises serious concerns about his qualifications to live up to the promises of the President-elect’s campaign. Mr. Trump will never meet those promises by surrounding himself with people, like Mr. Puzder, whose values are completely out of step with America’s workers.”

Puzder, 66, who donated $332,000 to Trump’s campaign along with his wife, has made a career out of taking advantage of workers.

Puzder worships markets and shuns government as if it were a demon. (He is a longtime admirer of the writings of Ayn Rand, the right-wing libertarian novelist.) Puzder has spoken out against raising the minimum wage. True to form, he is also an opponent of Obamacare, an advocate of charter schools and a proponent of lowing taxes for corporations and the rich.

“He thinks government support programs for low-wage workers—like those who work at his own restaurant franchises—are a disincentive to work, despite the fact that many fast food and retail workers’ wages are so low that they qualify for food stamps, public housing assistance and Medicaid,” said Chris Shelton, president of the Communications Workers of America.

In contrast to his employees, Puzder has been rewarded handsomely for his work over the years. In 2012, for instance, he received more than $4 million in total compensation. His pay reflects the pattern of the restaurant industry, where CEO pay is more than 700 times that of a minimum-wage worker.

“He fails to realize that it is low-wage employers—like him—who are the cause of workers living in poverty,” Shelton said.

What’s at stake and what to expect

Puzder has pointedly opposed regulatory changes to protect workers’ rights that have been pushed by President Barack Obama, and he certainly will try to roll back whatever gains progressives have made at any level of government that he can influence. For example, he rejects Obama’s attempt to update overtime pay rules that now deprive many low-wage workers of time-and-a-half pay for work they do beyond 40 hours a week. He has criticized paid sick leave policies.

He also opposes the Obama-era joint employer standard, which would make it easier to hold corporations, like McDonald’s and CKE, responsible for violations committed by those companies’ contractors and franchisees. Franchise businesses across the board are deeply concerned about the prospect of this standard being applied more broadly. But with Puzder as their guard dog in the Cabinet, they may not need to worry.

“Slime” in the Washington swamp

CKE has been named a defendant in several class-action lawsuits for failure to pay what it should under the law governing premium pay for overtime work. Additionally, some 60 percent of Labor Department investigations at Hardee’s and Carl’s Jr. restaurants found Fair Labor Standards Act violations, according to Bloomberg BNA. (The vast majority of those restaurants were owned by franchisees, not CKE.)

At times Puzder offends good taste rather than violates any law, such as his restaurants’ regular use of very scantily-clad women eating hamburgers in commercials, an image that Puzder has breezily defended as “very American.” He has also advocated for replacing workers with machines, using language many may find offensive.

“They’re always polite, they always upsell, they never take a vacation, they never show up late, there’s never a slip-and-fall, or an age, sex, or race discrimination case,” he told Business Insider.

National Employment Law Project executive director Christine Owens described Puzder’s nomination as “a sucker-punch in the gut to all the men and women of good faith who believe in the mission of the U.S. Labor Department.”

“The job of the labor secretary,” Owens said, “is NOT to strengthen the power of corporations to reap record profits by squeezing every last drop out of their low-wage workforce—and threatening to replace them with machines if they ask for wages they can support their families on.”

Randi Weingarten, president of the American Federation of Teachers, said the nomination was “deeply disappointing,” though not surprising.

“After a long campaign of promising to return prosperity and good jobs to struggling families, this pick makes it clear that Trump won’t drain the swamp [in Washington]—he’ll fill it with worse and worse kinds of slime,” she said.