Want to Stop Trump? Take a Page From These Dockworkers, and Stop Work 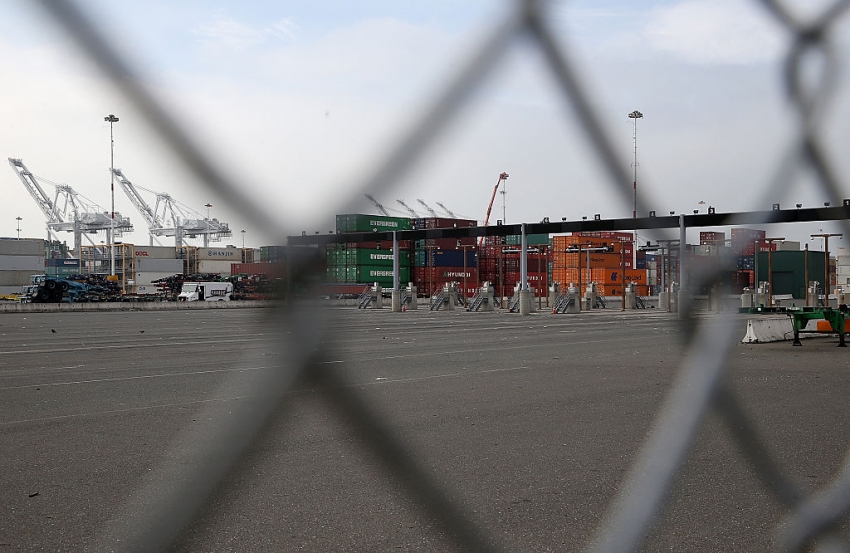 To resist Trump’s agenda, Oakland longshore workers shut down their workplace and reminded us of the potential of organized labor. (Photo by Justin Sullivan/Getty Images)

On the day of Donald Trump’s inauguration, many Americans wrung their hands. Some took to social media to express their discontent while others protested. But, perhaps, the most dramatic and important action was taken by dockworkers in Oakland, California: They stopped working. Their strike demonstrated the potential power ordinary people have on the job, when organized.

Longshore workers, who load and unload cargo ships, chose not to report to their hiring hall. As a result, “Oakland International Container Terminal, the largest container facility at the Northern California port, was shut down Friday,” according to the Journal of Commerce. It also reported that all other Oakland container terminals were essentially shut down, too.

Crucially, these workers did not first come together to protest Trump. They belong to the International Longshore and Warehouse Union (ILWU), one of the strongest and most militant unions left in the United States.

The ILWU, founded in the 1930s, represents logistics workers up and down the West Coast of the United States, in Alaska, Hawaii, British Columbia and Panama. For some 80 years, the union has fought for equal rights, democracy, economic equality and a vast array of other social justice causes. ILWU Local 10, which represents workers in the San Francisco Bay Area, often has been at the forefront of those fights.

ILWU members refused to load scrap metal intended for Japan because it had invaded China in the 1930s. The ILWU condemned the racist, apartheid regime in South Africa and Local 10 members periodically refused to unload South African cargo, including in the face of federal injunctions and employer pressure. They also refused, in 1978, to load U.S. military aid for Augusto Pinochet, a Chilean military general who led a coup against a democratically-elected, socialist president, Salvador Allende. On May Day 2008, the ILWU shut down Pacific Coast ports to protest the U.S. wars in Iraq and Afghanistan.

One key element of ILWU power is its job dispatch system. In the aftermath of its legendary Big Strike of 1934, which briefly became the San Francisco general strike, the union basically won control over job dispatch. Quickly, workers implemented a “low man out” system, which enshrined the idea that the person with the fewest number of hours worked be the first one dispatched. Such socialism in action should not be surprising from a union whose founding members included socialists, communists and Wobblies, the name for members of perhaps America’s most radical union, the Industrial Workers of the World. The ILWU also inherited the Wobbly motto, “An injury to one is an injury to all.”

Today, though some workers are assigned to specific companies on a long-term basis, many still are dispatched via hiring halls. This system gives workers incredible power because they decide when to report for work, creating the possibility for workers to coordinate not showing up. The result, as seen on Friday, was to shut down the port of Oakland.

Obviously, many workers, nationwide, do not operate under a dispatch system. But they can still organize something similar without technically calling a strike.

At the end of 2014, New York City police officers coordinated a “virtual work stoppage,” nicknamed the “Blue Flu.” And last year, Detroit public school teachers, enraged by the awful conditions students and teachers suffer from because of a lack of state funding, organized an effective “sickout.” In other words, workers need not officially “strike,” or even belong to a labor union, to engineer a shutdown.

Importantly, Friday’s action was not organized or endorsed by the ILWU leadership. Since its inception, the ILWU has stood on the left tip of the U.S. labor movement, but even this union has become more conservative during the past few decades. Nowadays, rank-and-file activists in Local 10 often take the lead.

Like most unions and working people, the ILWU opposes much of Trump’s anti-labor agenda, which promotes “right-to-work” (more accurately right-to-work-for-less) legislation, condemns public sector unions, seeks to privatize public schools and reverse the Obama administration’s actions on paying more workers overtime, reducing wage theft and ensuring worker safety. Trump’s proposed labor secretary, for one, has made his anti-worker positions clear. (That said, Trump’s opposition to the Trans-Pacific Partnership is welcome.)

Nor have Bay Area longshore workers forgotten Trump’s insult of Oakland. The president once said, “There are places in America that are among the most dangerous in the world. You go to places like Oakland. Or Ferguson. The crime numbers are worse. Seriously.”

To resist Trump’s agenda, Oakland longshore workers shut down their workplace and reminded us of the potential of organized labor. As the old song, written by Joe Hill and sung by Utah Phillips, declares, “There is power, there is power in a band of working folks, when we stand hand-in-hand. That’s a power, that’s a power that must rule in every land.”