Meet the Coalition Building a Global Union Movement Against Capitalism 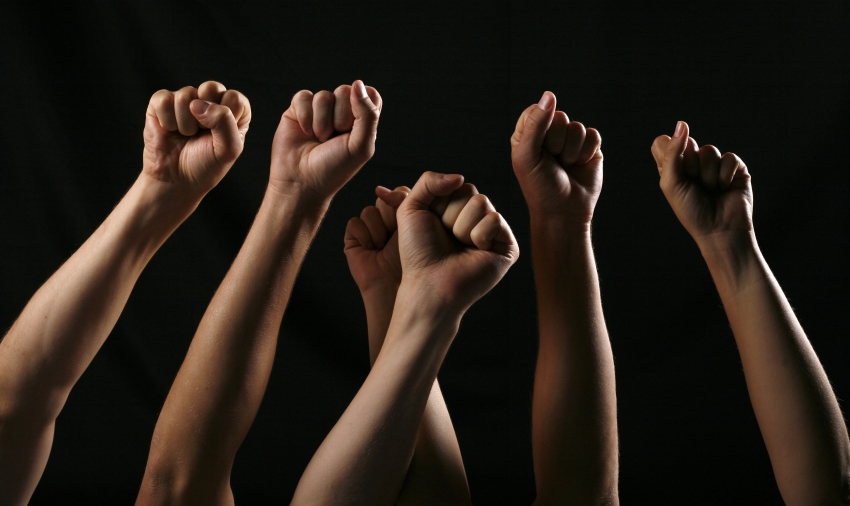 Leftist unions are building a global movement based on similar experiences in the workplace. (Erlo Brown/Shutterstock.com)

Before addressing the cramped and increasingly smelly room of a couple-dozen autoworkers, João Reis, a 32-year-old drill-press operator at Volkswagen’s assembly plant in Palmela, Portugal, offered an apology.

“Sorry but I’m going to speak in Portuñol,” he said with a laugh, referencing the informal pidgin in which Spanish and Portuguese speakers communicate with each other.

By this point, everyone was used to the language. At the third meeting of the International Trade Union Network of Solidarity and Struggle outside of Madrid, Spain—a four-day conference in late January attended by nearly 300 labor activists from 25 different countries and 35 different groups—activists were forced to get creative to communicate. Language barriers notwithstanding, participants aimed to renew ties to one another and establish new connections, uniting around a basic principle: If the labor movement is to stand any chance against the forces of global capital in the 21st century, its perspective must be international, its tactics aggressive and its politics left.

Such a movement requires building bonds based on similar experiences at the workplace. “They decided we weren’t making enough cars, so they tried to get us to work on Saturdays,” Reis explained before pausing to give translators time to echo the message into hushed tones of Polish and French. “So, we went on strike.”

A group of three Polish workers nodded along. They were wearing matching black pants and white shirts that displayed the logo of their union, “Workers Initiative”: the black-cat icon made famous by the Industrial Workers of the World. One of them, Przemyslaw Koterwa, a 39-year-old in the paint department of Volkswagen’s factory in Poznán, takes the floor next, speaking in Polish.

“We want to learn from your strategies, and we want to stay in touch and coordinate activities,” Koterwa’s comrade relayed in choppy Spanish. He said workers in Poznán enthusiastically followed the strike in Portugal last August, as well as another walkout in Bratislava, Slovakia last June that won a 14-percent pay hike. He translated the message written in Polish on the group’s shirts: “Yesterday Bratislava, today Poznán.”

By the end of the two-hour-long breakout session—one of seven dedicated to building ties among workers in specific sectors—activists from a half-dozen countries had spoken. There were the Spaniards from Renault-Nissan, Fiat and SEAT, the French from PSA and Renault-Nissan, the Italians from Pirelli, and the Brazilians from General Motors. During a coffee break, these workers exchanged details about salaries, job classifications and work organization alongside gripes about pro-business unions in their shops. They also agreed to create a What’s App group to stay in touch after the conference.

“If I get a notification about everything, I’m going to go crazy,” said Diego Rejón, the bald and imposing discussion moderator who works at SEAT, a Spanish automaker based outside of Barcelona. “Keep it to mobilizations, strikes, you know, important stuff.”

“We’re an important part of the working class”

A spirit of radicalism and internationalism runs deep within the Network of Solidarity and Struggle, a loose alliance organized by three national-level unions: Solidaires in France, the General Confederation of Labor (CGT) in Spain and CSP Conlutas in Brazil. All of these unions are on the left of their countries’ respective labor movements.

“We need to function as a class, and for us having contacts is fundamental,” said José Manuel Muñoz Póliz, general secretary of the CGT, which claims to have grown to nearly 100,000 members in recent years and defines itself as anarcho-syndicalist. “The resolutions that are being passed here won’t be defended by political parties or governments: They’re being defended by workers.”

Póliz said ties among union activists in different countries make the movement stronger as a whole—whether that’s by sharing information about broader threats like privatization and employer-friendly legal reforms or by adopting common actions and tactics. Because of the network’s commitment to working-class autonomy, he said it is more effective than the larger, more mainstream international union federations like the European Trade Union Confederation, whose agenda, he believes, is weakened by ties to parties and governments.

The network is fledgling, but growing. Since it launched in 2013, Solidaires, CGT and Conlutas have opened the network to anyone who adheres to its set of principles: a commitment to social-movement unionism and a broad anti-capitalist vision. Like its two prior conferences in Paris and in Campinas, Brazil, the 2018 version drew union activists from across the world, including those on the front lines of struggles against authoritarianism and repression. Among them were unionists from Algeria, Colombia, El Salvador and Mali, as well as the Tunisian General Labor Union, which won the 2015 Nobel Peace Prize, as part of a group of civil society organizations, for its role in the post-revolution transition.

Aside from working groups devoted to professional sectors and themes like colonialism and worker-self-management, conference attendees dedicated a day of discussion to feminism, tackling topics like abortion, childcare, LGBT rights and sexism in the labor movement. The conversations culminated in a call to action: an endorsement of a global general strike on March 8 on International Women’s Day.

“We’re an important part of the working class and need to be treated with respect,” said Janaína dos Reis, a leader of CSP Conlutas’ feminist caucus, Women in Struggle, and former metalworker in the state of São Paolo, in an interview with In These Times. “It’s especially important in this moment, a time when the working class suffers from austerity plans in Europe and historic attacks against its rights in Brazil.”

The near-total absence of U.S. trade unionists from the network was striking. That omission may have stemmed from language differences: French, Spanish and Portuguese speakers tend to form bonds with one another across Europe, South America and Africa. Unlike the United States, many of these countries also share a legal framework where multiple unions operate within the same workplace, giving rise to an array of labor organizations with varying political ideologies that represent workers across different sectors. Finally, there is the fact that U.S. radicals have little control over the unions to which they belong.

Yet, activists at the conference insisted the U.S. labor movement stands to gain from a stronger dose of internationalism. According to them, it isn’t just a question of principle, but of practical advantage. In the day-to-day tussles between multinational corporations and labor unions, the latter often suffer from information deficiencies that hurt campaigns.

An especially glaring example to observers is the United Automobile Workers’ failed union drive at Nissan’s assembly plant in Canton, Mississippi. In August, more than 60 percent of workers voted against the union, marking yet another defeat for the UAW in the Southern auto industry.

The French government owns a 15-percent stake in Renault, which is, in turn, the largest shareholder of Nissan. As many union supporters in Mississippi understood, that stake created a natural opportunity for the UAW to get the company to agree to remain “neutral,” that is, to not oppose organizing efforts. And the union tried to do just that. But while the union encouraged left-leaning parliamentarians and political figures to speak out against Nissan’s stance on workers’ rights, including those from the deeply unpopular Socialist Party, there was noticeable silence from La France Insoumise, France’s most popular left-wing political party.

“If the labor organizations hadn’t just engaged in a bureaucratic discussion amongst themselves, but had decided to apply more pressure, I think it could’ve put the government in an uncomfortable position,” said Marc Tzwangue, a Solidaires union representative at Renault's sprawling research center in suburban Paris.

At any rate, Tzwangue said the labor movement could use more of that, whether in France, the United States, or elsewhere. “We need to make things difficult for the bosses.”