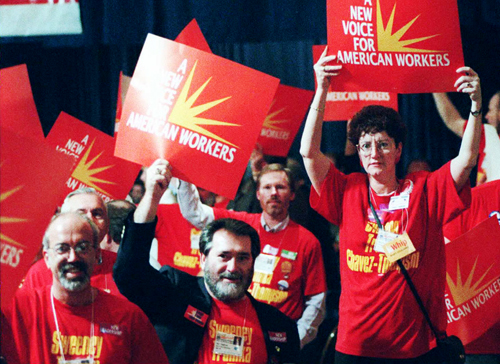 AFL-CIO members support the "New Voice" slate of candidates at a debate in New York in 1995. John Sweeney, who won the presidency that year, will leave office this month.   (Photo by STAN HONDA/AFP/Getty Images)

Hope for a revived union movement has come in successive waves in recent decades, only to recede over time. When the national AFL-CIO meets next week in Pittsburgh to choose new officers, the fans in the stands will be cheering the latest change in quarterbacks.

But neither handing the ball to Rich Trumka (current secretary-treasurer of the federation) or creating a united front of the AFL, Change To Win (CTW), and the National Education Association—a parallel effort now stalled by Trumka’s own election--are likely to stem union decline, by themselves.

Outside the Beltway, labor’s condition continues to worsen as workers face an avalanche of job cuts and contract concessions.

In the 1930s, adversity was the mother of invention for the working class; from the depths of the depression came a grassroots upsurge that, in tandem with a new Democratic national administration, changed the balance of power between unions and management for decades to come. In our time, despite myriad economic woes, neither the AFL nor the breakaway CTW have yet found a way to convert our current recession into a “rebuilding season.”

Union members made key contributions to Barack Obama’s election victory last fall, yet their payback so far has been meager. The current healthcare muddle in Washington doesn’t bode well in many ways, most of all for real labor law reform - when and if that contentious issue moves up on the Administration’s agenda.

As Kim Moody recently reported in New Politics, between 2006 and 2008, CTW affiliates registered an 8.6 percent net drop in size, while AFL-CIO unions suffered a 1.7 percent decline—stats not likely to improve during a “jobless recovery.” Overall, unionization hasn’t been lower since 1930, leading some in labor to hope that Trumka, a former coal miner, might be able to play the role that his UMW predecessor John L. Lewis did in that era.

Fourteen years ago, a few academic observers even saw shades of Lewis in mild-mannered, Bronx-born John Sweeney. In 1995, reformers, led by Sweeney, ousted incumbent leaders of the AFL-CIO for the first time in a century, promising to end labor’s stagnation and marginalization.

The former president of the Service Employees International Union (SEIU) declared that his “New Voice” team wanted to breath life into a tired central bureaucracy by reviving its state and local bodies, plus engaging a wider range of non-labor allies.

Under Sweeney, with Trumka as secretary-treasurer, the AFL-CIO went on a costly hiring spree to bulk up its organizing program, deploy “field mobilizers,” and apply “street heat” to recalcitrant employers or wayward politicians.

A decade later, Sweeney’s own union, the 2 million member SEIU, grew impatient when these efforts--led by a legion of former SEIU staffers—began to stall. Spurred on by Andy Stern, Sweeney’s successor at SEIU, “New Voice” critics insisted that further restructuring was necessary to increase “union density” and political clout.

In particular, Stern and his allies wanted more unions to merge and stick to their own mutually agreed-upon “jurisdiction” so scarce resources wouldn’t be wasted on competing campaigns for new members. When a majority of AFL-CIO affiliates didn’t embrace their ideas in 2005, seven organizational dissenters left to form Change To Win, taking one-third of all AFL-CIO members with them.

At the time, some labor academics again saw the second coming of the Congress of Industrial Organizations, the rival labor federation born of the great Depression that went on to organize millions of workers in the late 1930s and ‘40s (before re-uniting with the AFL in 1955).

Unfortunately, labor history has repeated itself—but this time as tragic farce. Launched by unions widely viewed as labor’s most “progressive,” CTW today is even more divided and dysfunctional than the “house of labor” it left.

CTW co-founder John Wilhelm of the Hotel and Restaurant Employees (HERE), is accusing his former ally, SEIU, of meddling in the messy divorce of UNITE-HERE. A minority faction of UNITE-HERE has split off and joined SEIU.

Amid this carnival of organizational cannibalism, some concerned labor leaders have understandably been trying to promote “labor unity.” After Obama’s victory (and at his behest), they set up a national-level coordinating committee to present a more united front on key legislative/political issues like workers rights and healthcare.

Participants include the independent National Education Association and the biggest unions in both CTW and the AFL-CIO. But their hopes of unveiling a new “federation of federations” by this fall have not materialized, in part because of the AFL-CIO’s own bureaucratic wariness about being subsumed in some larger umbrella organization.

In Trumka’s view, labor unity can best be achieved when and if CTW defectors return to the fold, one by one, under his forgiving presidency (after saying five Our Fathers and Five Hail Marys for leaving labor’s one true church in 2005).

Unlike the detailed, programmatic vision projected by “New Voice” in 1995, Trumka’s own “Hail Mary pass” for organized labor revolves around his uncontested election; the man himself is the message.

He spent the summer on a self-proclaimed “listening tour,” but actually did quite a bit of talking--about himself, for the purpose of refurbishing an image of militancy (developed at the Mine Workers two decades ago) that has suffered from 14 years of Prince Charles-like waiting in the wings for Sweeney to retire.

One resulting profile was a Sept. 7 Washington Post piece by Alec MacGillis, entitled “No Getting Around This Guy.” Based on a long chat with 60-year-old Rich—who has the “burly build” of a “bulldog”--MacGillis sees next week’s convention as “ushering in a tone of leadership that will be far more muscular than that of the avuncular Sweeney.”

And that’s because, as the Post reported, Trumka played “the ‘monster man’ position” on his high-school football team in Nemacolin, Pa., forty-two years ago. (Translation: he was a defensive back who could “stop the fullback in the middle or pick up speedy receivers on the flank.”)

Left unsaid (or unreported) was whether Trumka’s proposed shift from defense to offense, with him playing quarterback instead of Sweeny, is actually going to move the ball down the field any further than the same team did before its “New Voice” became old.