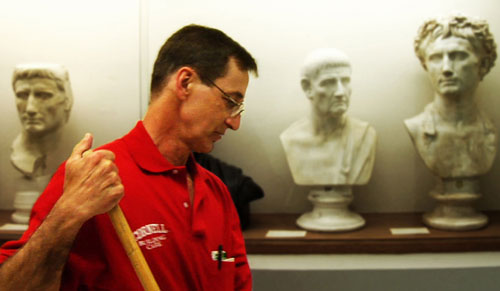 A single conversation with a wise man is better than ten years of study. —Chinese proverb.

Ever think about the people who clean up after an event? The ones who keep the bathrooms, floors and areas clean at your local bookstore, campus or restaurant?

They are the housekeepers, janitors, and custodians who push a broom, a duster, a mop. They do the dirty work and are distained, ignored or looked at with a blind gaze. For some, their presence provokes feelings of guilt or superiority.

The new documentary Philosopher Kings takes us on a journey through the eyes of five custodians from varied backgrounds that work at different universities across the nation. As their stories unfold, they show us the difference between having an “education” and possessing wisdom. These are universal mini-narratives of love and pain, hope and despair, and strength of spirit.

What becomes apparent is how comfortable the custodians are in their own skins.

“I think people’s perception of a custodian is like, they are there because they don’t have another choice,” Melinda Augustus, a custodian at the University of Florida, says in the film. She continues,

People will ask what do you do and if I say ‘I work at the university’ they ask ‘okay, what do you do out there?’ And I say, ‘custodian’, and it goes no further. I’m just a custodian… [but] I’m here in this custodian position because I want to be here. I like what I do. I like cleaning. I like the environment I work in.

Another custodian, Corby Baker, who works at Cornish College of the Arts in Seattle, Wa.: “Sometimes I talk to people and they won’t even look at me. I think most of them have a preconceived notion if they see you pushing a trashcan or dragging a mop bucket somewhere.”

A theme becomes apparent in “Philosopher Kings”: The custodians' work is more to them than just pushing a mop. We see Baker creating art in his spare time.He says:

I saw an ad for a janitor and it offered benefits and it was at an art school. It's not so much being a custodian or janitor… but about being in an element I’m at home… I’m excited about art again. Life should be about doing what you love. Even if it’s very difficult to do that.

Jim Evener is a custodian at Cornell University, in Ithaca, N.Y., who says this about his job: "It’s a learning opportunity every day. Whether it’s a fellow worker, a student or a professor. You can learn from every one of them. I’ve learned more the seven years I’ve been here than all the time I was in school.”

Adds the Vietnam War vet who is a bass musician in his off-time, “If you are miserable every day then you are doing something wrong.

This documentary is about people who work hard. Award-winning producers Patrick Shen and Greg Bennick do a wonderful job of spotlighting the “artists, humanitarians and thinkers who clean up –but do not study at– some of the finest schools in the nation.”

Josue Lajeunesse has worked at Princeton University for almost 15 years. He goes back to his homeland of Haiti whenever he can. He works as a custodian starting at 7 a.m. and then as a taxi driver at night, getting just a few hours of sleep before he has to go back to his day job.

He sends money back to Haiti to support the six children of his oldest brother, who died. “It’s my responsibility,” he says. He also supports his other relatives: 15 family members in total.

With the money he has left from that, Laujenesse and another brother work toward a project for poor families in Lasource, a village in Southern Haiti where his dad used to live, to provide a clean water system for 25-30 families, the members of which are hungrier than ever.

The film pans to former president Bill Clinton, who is speaking at a University of California graduation. “When you leave here today do you have any idea what a job we’re leaving for the people who come here and have to clean this up and pick up after us? Do you have any idea what they make or how they support themselves or their children or whether they believe anyone ever sees them?”

Philosopher Kings will be shown as part of the Eighth Annual SF Documentary Film Festival (DocFest) in San Francisco. The festival, which runs from October 16-29, will present more than 50 films from around the world to offer a “manageable amount of cinematic truth for everyone.”