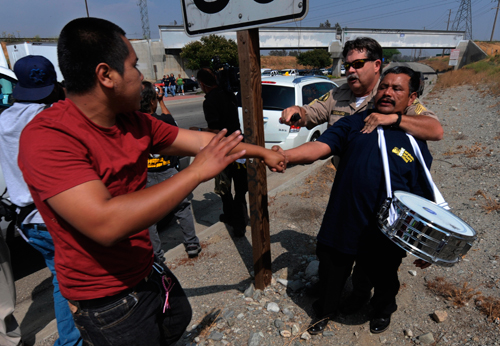 A sheriff's deputy arrests a protester after he fought with a driver that forced his way through a union barricade outside Los Angeles in May 2009. Twelve Warehouse Workers United members and the driver were arrested.   (MARK RALSTON/AFP/Getty Images)

Blue-collar warehouse workers in the Inland Empire in Southern California once earned a decent living. They weren't getting rich, but they could buy homes, pay their mortgages and take care of their families.

Now many more are forced to accept low wages because of the economic crisis and high unemployment rate. The Inland Empire (San Bernardino and Riverside counties) was once one of the fastest-growing areas of the country, but the area is now in the throes of the economic meltdown and foreclosure crisis.

The warehouse workers’ living-wage warehouse jobs have dwindled as giant companies contract out work through temp agencies. But the use of temp agencies began well before the current crisis.

There are more than 118,000 warehouse workers in the Inland Empire employed at some of the largest warehouses and distribution centers in the country. These facilities store goods for huge retailer supply chains such as WalMart, Target, Lowe’s, Kmart/Sears and Home Depot.

Now a move is underway to organize the workers. Backed by Change to Win  —a coalition of five unions with more than six million members—Warehouse Workers United (WWU) is building a public campaign.

Among the group's four main demands, according to Dan Medress of WWU: All warehouse jobs must pay a living wage; the system of “temporary” employment must end; affordable health care coverage must be made available to workers; and warehouse workers should be able to form a union if they wish to.

“The day after [one of the protests, temp agency] Staff Mark held a ‘union avoidance’ seminar which was attended by every warehouse representative in the Inland Empire,” Medress said.

When a photo of protesting worker Olga Romero appeared in a local newspaper, she was called into the office of the staffing agency that employed her, fired and replaced with another worker, Medress said.

Contracting out labor to cut costs is not unusual (see this Working ITT story about Safeway and Lucky’s grocery stores last week, or look at the garment industry and sweatshops).

When these companies hire workers through a third party, they can skirt responsibilities that were once a staple for many U.S. workers: healthcare, paid sick days and vacation pay, and the assurance that workers wouldn't be fired on a whim.

Hiring out through a third party also squelches organizing efforts.

There were approximately 424 temporary employment establishments during the second quarter of 2008; this was up from 119 in 1990.

Because the Inland Empire is relatively close to the Los Angeles and Long Beach ports, it has become a major distribution hub and prime location for warehouses and distribution centers, typically known as the “goods movement industry...

Warehouse worker Gus Jimenez has worked in the industry since he was 17.

“We need good jobs that pay us a living wage and management that treats us with respect," Jimenez says. "They harass and abuse us in the warehouses and enough is enough. We deserve to be treated like human beings.”