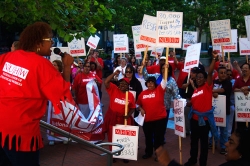 Healthcare workers protest outside of the NLRB office in Oakland in July 2009 over being denied union elections to vote to possibly leave the Service Employees International Union.   (Photo courtesy of NUHW via Flickr)

As organized labor tries to sustain its inside-the-Beltway campaign for an Employee Free Choice Act (EFCA), competitive healthcare worker organizing in California provides a contentious counterpoint to union claims that representation decisions should always be made without threats, coercion, and other forms of interference facilitated by National Labor Relations Board election delays.

In California healthcare, one leading EFCA proponent—the Service Employees International Union (SEIU)—has become a major foe of employee free choice, wherever its own members or even unorganized workers favor another union.

Tens of thousands of SEIU-represented hospital and nursing home workers have expressed a desire to join the National Union of Healthcare Workers, as demonstrated by their majority card or petition signing. But since last February, SEIU’s standard response to NUHW election petitions has been to enlist the always dysfunctional Labor Board—the bogeyman of EFCA campaigners everywhere—in stalling as many of these votes as possible.

Even unorganized workers, who are just trying to win collective bargaining rights for the first time—not switch from SEIU to NUHW—have been victims of SEIU’s management-like obstruction of their organizing activity.

(A bit of background: NUHW is the new union created by hundreds of elected local SEIU officers, board members, and stewards who were removed last winter when SEIU President Andy Stern seized control of 150,000-member United Healthcare Workers-West and installed appointed leaders, from out-of-state.)

As NUHW notes, its representation petitions should have triggered NLRB-conducted votes within 45 days in cases where there was no complicated legal issue to resolve. Instead, during the last eight months, the NLRB has managed to hold only three elections so far, none of which involved existing SEIU members. In two of these, NUHW has been declared the official winner; in a third newly-created bargaining unit, where NUHW also has very strong support, negotiations on a first contract are now being delayed, thanks to SEIU.

As Lupe Hernandez from Tarzana Medical Center reports, “SEIU sent one organizer for every two employees to try to stop us, but they couldn’t get enough votes. When we finally had our election on Oct. 14, SEIU filed last minute charges so our ballots would be locked up and not counted until the charges were resolved.”

The situation at Memorial Hospital in Santa Rosa is even more revealing. With union help, workers at this facility, part of the St. Joseph Health System, tried for five years to persuade the religious order that sponsors St. Joseph to restrain its anti-union activity prior to any NLRB representation vote. Just as UHW “corporate campaigners” were about to make a breakthrough in this model drive for “management neutrality,” Stern put UHW in trusteeship. His appointed staffers then abandoned the organizing committee at Memorial, much to the anger and dismay of union supporters in the hospital.

Last April, a majority of the 600 Memorial workers petitioned the NLRB to hold a vote so they could join NUHW instead. As a key community supporter, Monsignor John Brenkle, wrote earlier this month in the Santa Rosa Press Democrat, both NUHW and St. Joseph management “have expressed willingness to sit down and negotiate ground rules leading to a fair election agreement.”

However, according to Brenkle, “SEIU has been misusing labor law as a means of delaying an election for as long as possible and refusing to come to the table with the other parties.”

In an open letter to Brenkle and other Santa Rosa religious leaders, SEIU’s executive vice-president Eliseo Medina, a co-trustee of UHW, explained why his union tried to block the NLRB vote at Memorial, now scheduled for Dec. 17-18. SEIU, he said, is

deeply troubled by the prospect of Santa Rosa hospital workers making a choice based on the promises of individuals with whom they are familiar—without considering that NUHW has no real membership base and its future viability is questionable at best.

According to Medina, his union will not participate in three-way discussions on election campaign guidelines because “that would suggest that ‘NUHW’ is a legitimate alternative” to SEIU. Only a “bi-lateral agreement with the employer” is appropriate, he argued, despite a recent call by the North Bay Central Labor Council for SEIU to withdraw from the upcoming election because it lacks worker support.

The Central Labor Council’s intervention on behalf of one union over the other, in a contested organizing campaign, is highly unusual. But NUHW has been garnering support from many such allies throughout the state and around the country.

On Nov. 16 and 17, the new union held back-to-back fundraisers in San Francisco and Los Angeles. Among those attending in both places were local leaders of the hotel workers union, Unite HERE, which currently has multiple conflicts with SEIU. The northern California event was held in the plumbers hall and attended by many well-known Bay Area political figures; in L.A., the venue was the headquarters of the United Teachers of Los Angeles (UTLA).

SEIU responded to both events with “rent-a-mob” protests—staff and loyal members were bussed in to march, shout, bang drums, and in L.A., throw eggs and water bottles at the hospital and nursing home workers who
dared to cross their “informational” picket-lines.  If NUHW is really as weak, member-less, and irrelevant as Medina claims, one has to wonder: Why was such activity necessary? And why is SEIU escalating its threats against other unions, central labor councils, and public figures who do regard NUHW as a “legitimate alternative” to SEIU? (For more details, see Randy Shaw's “SEIU Wages War on Progressives,” published at BeyondChron.org last week.)

The answer is that SEIU itself—in California healthcare, at least—lacks popular legitimacy, rank-and-file support, and organizational self-confidence. Its main strategy in contested representation elections is to conduct costly, scorched earth campaigns, replete with the kind of threatening behavior that was on display at UTLA last Tuesday night.

In SEIU’s view, workers at Memorial in Santa Rosa, and any other hospital, are far better off remaining non-union than becoming part of NUHW. To keep its own disgruntled dues-payers in captivity, SEIU will continue to flood workplaces with paid staffers, demonize NUHW, and—just like any union-busting employer—manipulate NLRB case-handling procedures to ensure that “justice delayed is justice denied.”

This is a truly appalling spectacle—but one dear to the heart of EFCA foes everywhere because of the monumental hypocrisy involved. As Monsignor Brenkle points out, SEIU’s behavior “flies in the face of Catholic social teaching” and “contradicts its own national advocacy” of a “new model of union elections that truly protect and respect workers’ rights.” The union’s actions “undermine the work of labor, clergy, and workers” and “the principles we have all worked so hard to achieve” through faith-based community organizing, he said.

“The decision about unionization should be in the hands of workers alone, “ Brenkle says. “After five years of organizing at Memorial Hospital, it is high time workers get that chance."

Steve Early, a former Communications Workers of America organizer, has helped arrange fundraising events for the National Union of Healthcare Workers. He has been active in the campaign for EFCA and for organizing rights agreements that facilitate union recognition without NLRB involvement. He can be reached at Lsupport@aol.com