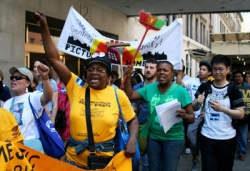 Domestic Workers United, shown here rallying last summer to extend basic protections like overtime and sick leave to domestic workers, will be part of a special workshop at this year's Labor Notes conference for those involved in organizing and representing home-based workers.   (Photo by Scott Lu)

Workshop/worker panel to take place April 23-25, in Detroit, Michigan, in conjunction with the 2010 Labor Notes Conference.

We write because of our interest in the challenge of organizing and representing home-based workers.

As labor activists, direct care providers, or academic researchers, we have all been involved in aiding or studying organizing work among publicly-funded personal care attendants and child care providers, plus other types of domestic workers. Largely female, people of color, and very often foreign born, these workers have been the largest single source of new union members—more than 500,000 in the last ten years.

In recent months, however, adequate funding for home health services in California and other states has been threatened by local budget cuts. Changes in Medicare reimbursement practices—as part of President Obama’s “health care reform”—may also affect these programs adversely.

Inter-union competition for home-based workers has intensified in places like Fresno County, California, where the outcome of a vote involving 10,000 home care workers last June is still being contested. In Illinois, 3,000 Illinois workers who provide in-home care for the severely disabled recently voted to reject representation, despite having a choice between two unions on the ballot.

That’s why we think this is a particularly good time to step back and assess our collective efforts to create a “voice-at-work” for home-based workers, while improving the conditions of domestic labor generally.

During the weekend of April 23-25, in conjunction with the biennial Labor Notes conference in Detroit, Michigan, there will be a wide-ranging daylong discussion of the challenges facing unions and workers centers as they try to build durable, effective, and member-driven organizations among men and women employed in such “non-traditional” workplaces.

We hope you will join us in shaping the agenda for this meeting, helping to publicize it, and participating, if you can. On a rare cross-union basis, we will be exchanging information about home-based worker organizing and bargaining, rank-and-file leadership development, other job-related training programs, plus on-going legislative/political campaigns for union recognition and program funding. We hope to learn from each other’s union building successes and setbacks, while identifying “best practices” that might be replicated more widely.

To make suggestions for additional content or speakers at our planned home-based worker panel/workshop at the Labor Notes conference, please contact Steve Early at Lsupport@aol.com or 617-930-7327.

You can register now for the overall April 23-25 conference, at www.LaborNotes.org.

Please share this invitation with union co-workers or academic colleagues in California, Washington, Oregon, Illinois, Michigan, Missouri, New York, New Jersey, Pennsylvania, Massachusetts, or any of the other states where home-based worker organizing has contributed so much to union membership growth in recent years.

*Jennifer Klein, Professor of History, Yale University, and co-author, with Eileen Boris, of Caring For America: How Home Healthcare Workers Became The New Face of Labor