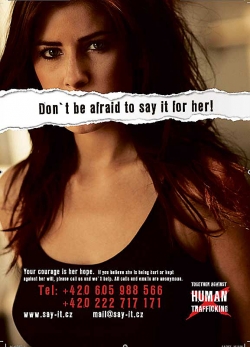 You probably didn't realize it, but a month-long campaign against human trafficking is now underway around the country. President Obama declared January the "National Slavery and Human Trafficking Prevention Month." In his presidential proclamation released early last week, he said:

This modern-day slavery will never end unless we raise awareness, strengthen the law and provide comprehensive support so victims can come out of the shadows. That means taking action in our courts, up in Sacramento and out on our streets so that this outrageous crime can be reported and perpetrators can be held accountable.

The collaborative is calling for the passage of legislation sponsored by Assembly member Sandré Swanson (D-Oakland), which would strengthen state law to give prosecutors the ability to prosecute child trafficking without having to prove coercion. The change would bring California law in line with the federal law.

The State Department estimates that there are between 14,500-17,500 people trafficked in the U.S. each year for modern-day slavery. San Francisco is a major transit point for traffickers because of its large international port. Annie Fukushima, the Anti-Trafficking Programs Coordinator at Standing Against Global Exploitation (SAGE) spoke on KPFA January 11 about the campaign and SFCAHT.

“There are estimates that 43 percent of trafficking in California occurs in the Bay Area. We see individuals trafficked from all over the world,“ Fukushima said.

A case that brought human trafficking to light in the Bay Area was the case of Lakireddy Bali Reddy, a Berkeley landlord convicted in 2001 for immigration fraud and trafficking minors for illegal sexual activity.

Reddy was exploiting the H-1B visa system to bring poor Indian workers into the U.S. as forced laborers. He brought them in claiming they were computer programmers and instead forced them to work in his restaurants and apartment buildings. Eventually sentenced to eight years in prison and forced to pay back $2 million, he was released in April 2008. (The Reddy family still operates many apartment complexes in the Berkeley area under the names of Reddy Realty and Everest Properties.)

In June, a center to offer help and shelter to victims of human trafficking will open in San Francisco. The Freedom House will offer a safe home and support for these victims.

As the recession continues to keep the economy down, the demand for human trafficking is up. Numerous international organizations warn that the global financial crisis is creating a bigger demand for cheap goods and services and an increase in trafficking, according to a Trafficking Persons Report issued by the State Department last November. The report states that

This growing poverty is making more people vulnerable to both labor and sex trafficking, boosting the supply side of human trafficking all over the world.

The Coalition to Abolish Slavery and Trafficking states there are about 27 million enslaved people around the world. For more on this horrendous problem, check out this Working ITT post by Michelle Chen about human labor and trafficking problems around the world, as well other pieces here and here.

Raising awareness about this ongoing assault on human rights can never be enough for the millions of people who don’t have a voice and are enslaved in the world’s fastest-growing criminal enterprise—a $9 billion industry, according to the Coalition to Abolish Slavery and Trafficking.