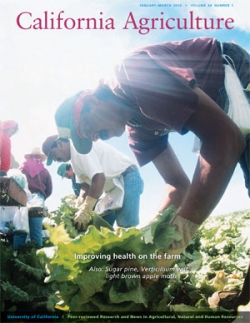 Workers in California's Central Valley are exposed to particulates that could lead to respiratory ailments.

If you’ve ever driven through California's Central Valley on Highway 5 or 99, you’ve probably seen the gray haze over the area and experienced the thick and smelly air.

For the 1 million agricultural workers who labor in the fields and large dairies prevalent in the area, the air is more than just an irritating byproduct of working outside. New research points to a potential link between poor air quality and agriculture-related health problems, according to a study published in the current journal California Agriculture.

Shipping trucks, pesticides, farm machines, field burning, manure, and the increasingly traveled Interstate-5 and 99 corridor are just a few of the things that belch forth the fumes that makes this air among the country’s worst. Air particulate levels in the San Joaquin Valley are the highest recorded in the United States.

Scientists with the UC Western Center for Agricultural Health and Safety at University of California, Davis, released original research finding a possible environmental connection between pesticide and air pollution exposure and poor health.

These workers face high risks of asthma and bronchitis and other respiratory illnesses: diabetes, and stress-related mental problems.

The research comes at the same time a battle is being waged by Kettleman City residents to stop expansion of the state’s largest toxic landfill, and a call by Senators Barbara Boxer and Dianne Feinstein for an investigation into birth defects in that farmworker community and a clean-up of the city’s polluted drinking water.

The air pollution that plagues the San Joaquin Valley comes in the form of “particulate matter,” which is coarse, fine and ultrafine. The smallest particles — fine and ultrafine — are capable of deeply penetrating the respiratory tract. Breathing in the coarser particles is especially worrisome to elders because those particles can increase cardiopulmonary problems.

Diesel emissions from agricultural operations and agriculture crop waste burning, for example, produce the coarser particles. Ammonia that comes from fertilizer and livestock can mix with vehicle exhaust to form both coarse and ultrafine particles.

In the farming community of Parlier, Calif., scientists exposed lab animals to three days of various levels of particulate matter for six hours a day for three days. They came up with their findings after observing how inhaling the ambient air at different levels affected the animals. The research team had a mobile field unit with a special breathing test system, and particle monitoring.