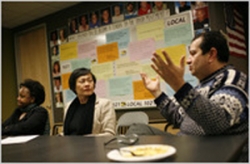 When rank-and-file members run for office in the Service Employees International Union (SEIU), it’s not easy to win—or even run. And that’s not by accident.

In Los Angeles Local 6434, for example, officials installed by President Andy Stern adopted an election rule found illegal by the U.S. Department of Labor, but approved by Stern. The by-laws required would-be candidates to collect nearly 5,000 names on nominating petitions. In a “local” of 160,000—most of whom are home-based workers who never see other members—this was foolproof incumbent protection. It was also a formula for uncontested elections ad infinitum and lack of leadership accountability to the rank-and-file. (Not coincidently, 6434 soon became the scene of a major 2008 corruption scandal involving the local’s top officer, Tyrone Freeman, who misappropriated nearly $1 million from its treasury.)

Even in SEIU “mega-locals” where there’s no stealing, lack of accountability to the membership is still a big problem. When previously separate locals are merged to create new ones covering a whole state or region of the country—a widespread practice in Stern’s union—the official rationale is that such consolidation “builds power for workers.”

But a number of recently-restructured SEIU locals, run without benefit of elected leaders—who were removed in favor of appointed officers and staff—have proven to be extremely dysfunctional and unpopular with dues-payers. On both coasts, SEIU-represented workers, particularly in the public sector, are saying that “power” was taken away from them, in their own union, and they want it back—so they can deal more effectively with their employers.

The trend of reclaiming big public employee locals from discredited and increasingly incompetent Stern appointees began last Spring in Massachusetts. The 10,000-member Local 888 was the product of SEIU restructuring that shuffled workers around like pieces of furniture for several years; through a combination of trusteeships and then mergers, some members were deprived of the right to vote for local officers for as long as five years.

By early 2009, Local 888 was in bad shape financially and literally coming apart at the seams. Angry members in some of its 207 separate state, county, and municipal bargaining units were petitioning the labor relations commission to decertify the union. In 2005, the local’s largest unit, composed of 2,000 workers at U-Mass, was so disgruntled that, after a long struggle, it was allowed to leave and join the Massachusetts Teachers Association/NEA).

888’s steward system was in disarray. High staff turn-over continually disrupted contract negotiations and enforcement. When members had a workplace problem, they were told to contact 888’s “call center” which was not good at returning calls. Due to local fiscal crises throughout the state, government workers were at risk of losing jobs, pay, or benefits. But that didn’t stop Susana Segat, a loyal ally of Andy Stern on SEIU’s national executive board (who was originally appointed by him to run 888), from awarding herself a whopping presidential salary increase.

After a difficult campaign, the second of its kind against Segat, the Change888 slate succeeded in ousting her last April, by a two-to-one margin, with 22 percent of the membership voting. (For a full account, see "Members of a Massachusetts SEIU Local Dislodge an Incumbent," by Bruce Boccardy.) Unlike Segat, who was never a working member of 888—a not uncommon but often unhelpful leadership credential in SEIU—her challenger, Bruce Boccardy, had spent many years in SEIU bargaining units as a Boston city employee and active steward. Since taking over the local with a like-minded group of reformers, he has expanded steward training and recruitment.

The local now tries to keep everyone better informed with regular newsletters, flyers, and an e-bulletin called The Spark, which is reaching 3,000 members at their home email addresses. Worker participation in bargaining, organizing, and political action has been actively encouraged and would-be defectors have been urged to give SEIU another chance.

Unlike his aloof and imperious predecessor, Boccardy makes frequent workplace visits. He has cut his own salary, empowered the executive board, and invited members and their families to visit the union office. He is also trying hard to repair 888’s damaged relations with a wide range of community-based organizations, including Jobs With Justice, the workers’ rights coalition that 888 abandoned under Segat. (Last Saturday, the local even hosted a well-attended JWJ training session attended by 100 members of SEIU, IBEW, CWA, AFSCME, AFT, AFGE, and other unions.)

“Our goal,” Boccardy explained in a recent open letter, is to “transform [888] into a model for other SEIU locals….We believe that none of our goals and objectives will be realized without a highly active membership.”

As reported in the last several days by Labor Notes and Randy Shaw’s Beyond Chron, “Change888” has now been joined by “Change1021,” a completely separate but similarly inspired movement of northern California public workers to reclaim their local as well. Local 1021 posed an even bigger challenge for reformers, who swept 26 out of 28 elected positions there last Friday.

As its number implies, 1021 is the product of an even grander Stern consolidation of ten locals into one, three years ago. The combined membership—five times larger than 888’s—extends all the way from the Bay Area to the Oregon border.

As San Francisco EMT Larry Bradshaw, 1021’s newly-elected third vice-president explains, the International’s original merger scenario was to tighten headquarters control over the local’s affairs—for the benefit of the membership, of course.

“Stern justified his centralizing agenda on the claim that ‘bigger equals stronger,'" says Bradshaw. A protégé and loyal lieutenant—in this case, Damita Davis-Howard—was picked to run the merged local. Per usual, he says,

the appointee faces no election for three years and uses the power of the presidency, and patronage, to build a base and transition seamlessly into becoming an elected leader. [But] Stern’s formula was dysfunctional from the beginning, with many staff vacancies and no one overseeing contract issues for thousands of city and county workers.

Then came the recession. “In the face of budget deficits and aggressive employers, Local 1021 proved disorganized as leaders conceded to almost any demands by employers for concessions,” Bradshaw says. Many members began to conclude that “bigger seems to mean more bureaucratic,’ not more effective or responsive.

In late January, a 1,500-worker 1021 unit in Marin County did what smaller 888 groups started to do in Massachusetts under Segat—they petitioned to replace SEIU with an independent union.

Change1021 hopes to discourage this exodus and revitalize the local, drawing on the skills and experience of its leaders and supporters. Their opposition ticket included classified school employees, municipal workers, nurses, transit workers, and staffers at nonprofits, like the Tenderloin Housing Clinic in San Francisco, where new president Roxanne Sanchez, a former BART union activist, works. She won by a 2 to 1 margin. Meanwhile, her running-mate for local “CEO,” Sin Yee Poon, a rank-and-file leader from San Francisco’s Human Services Agency, defeated Davis-Howard by 700 votes out of 5,300 cast a 4-way race.

The platform of Change1021 echoes that of Change888. It calls for greater “democracy and accountability,” “financial transparency,” “rebuilding from the bottom up,” “better communication and access to information,” resistance to contract concessions, and restoring membership pride in the union.

The 1021 reformers also made a point of declaring that they “will not spend a penny” of “precious local resources” to “raid or attack other unions.” They criticized SEIU for “spending tens of millions of our dues dollars” on such fights—a reference to Stern’s costly and controversial wars with UNITE HERE and the new National Union of Healthcare Workers (NUHW), which is gaining ground on SEIU in California health care.

As Poon told Labor Notes readers: “We will have to deal with a huge task of rebuilding a union in a new direction.” “Even in better times this was difficult,” Sanchez agrees. “But, with our local union in such disorder and our International union so estranged from its members, it will be a formidable challenge.”

One observer wishing them well and applauding their achievement is a Bay Area NUHW founder. He was part of the talented and dedicated leadership cadre ousted by Stern a year ago during SEIU’s disastrous take-over over of United Healthcare Workers (UHW), which remains in trusteeship, with thousands of its members poised to join NUHW in upcoming decertification votes.

This longtime union activist, who wished to remain anonymous, was struck by the “extraordinary disaffection and demobilization of the workers” represented by 1021, as reflected in very low voter turn-out.

“In what, by trade union standards, was a hotly contested election, taking place in the middle of a fiscal crisis with wages, benefits, and thousands of jobs on the line, only 5,407 ballots were returned (5,360 valid) out of more than 42,000 eligible to vote and a claimed membership of 54,000?” With this kind of hollowed-out unionism, how long will it be, he asked, “before bosses and politicians figure out that ‘the SEIU juggernaut’ is a paper tiger”—in California and too many other places as well.