In Solidarity, Labor Activists and Organizers Huddle at Biennial Conference 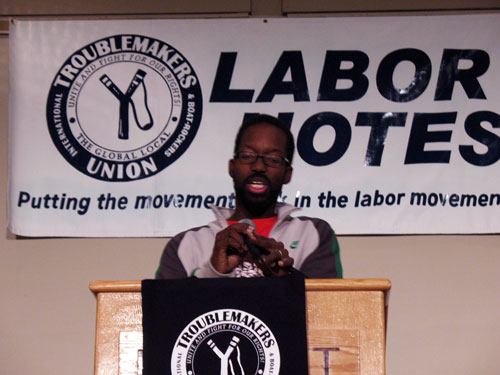 Detroit-based poet and activist Will Copeland performs at the 2010 Labor Notes Conference on Saturday April 24.   (Photo by Jeremy Gantz)

DETROIT, MICH.—The hundreds of union organizers and activists attending this weekend's Labor Notes Conference for a weekend of strategizing and solidarity are all too aware that the labor movement is as troubled as the city hosting them.

That's why they've traveled across the country, or around the world, to be here. The biennial conference, held at a unionized hotel, is a rare chance for organizers and dissident unionists to share stories, step back from the day-to-day struggles that define their lives, and dream up ways to strengthen unions and labor's public image. That image has taken a beating during the current economic crisis.

John Campbell-Orde knows all too well that the benefits of unions aren't always understood—or fully appreciated—by American workers. An organizer with the Professional Guild of Ohio (PGA), he's trying to convince about half of a group of county workers in southern Ohio—an agricultural area lacking the unionism so common in the state's northern industrialized cities—to pay their "fair share" into PGA. Those non-union members reap the benefits of their union-secured contract, but don't help the union pay its bills.

The county commissioners, the workers' ultimate boss, won't allow a "fair share" rule, Campbell-Orde said. That rule would ensure that workers benefiting from a union contract help pay for the union's service. Right now, only half of the unit are PGA members.

"People didn't grow up around unions, and have family and friends who are in unions," Campbell-Orde said during a Friday workshop titled "Creative Tactics." The trouble is, he said, how do you convince people to help pay for something they're already receiving—job security, higher wages and benefits?

Unions have helped to create, and support, the middle class, said Faith Robinson of the Coalition of Labor Union Women. "If they get rid of the union, they'll have only poor and rich." PGA should tell nonmembers that "when we don't exist, you don't exist," she said.

But other organizers cautioned that using adversarial language to bring in new members can backfire. Better to increase the union's ranks by using a unifying slogan like "share the load," said Amber Cooper, an organizer with the American Federation of Teachers, Local 3550. Make the campaign conversational, not confrontational, Cooper suggested. Oppositional language should be reserved for management, which will always be the real adversary.

Framing problems and using appropriate tactics and rhetoric to win workers' support (and, of course, cow implacable bosses) is at the center of union organizers' work. Each campaign demands customized tactics. "You have to balance the negative and the positive," Campbell-Orde. "It's a tight rope."

At the root, the problem facing PGA—how to bring in more members to help pay for its work representing and defending workers' interests—is about values, argued David Rowland, also with the American Federation of Teachers, Local 3550. "Why would people be proud to be in a union?" Rowland asked. "What's the value of the union" to non-members?

Answering those questions clearly is key, he said, to convincing people to pay dues and help the union successfully negotiate another contract. When people value unions, they don't mind paying dues.

Of course, with just 12.3 percent, or 15.3 million, of American workers now unionized—down from 20 percent, or 17.7 million union members in 1983, according to the Bureau of Labor Statistics—Rowland's questions will have to be persuasively answered beyond Campbell-Orde's union and southern Ohio.

If they are to revive their embattled movement, labor activists around the country will have to be louder and more public than ever—bosses have never spread the wealth willingly. But for one weekend, at least, here at ground zero of the labor movement's post-industrial quandary, a revival seems a bit more possible.