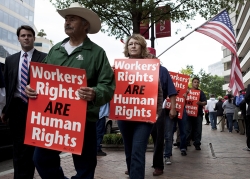 The Mexican government’s use of force to shut down a three- year-old miner’s strike in Cananea, in northern Mexico, last month has led to a significant new development on the labor front in the Americas.

On June 21, the National Union of Miners and Metal Workers (SNTMMRM), known as Los Mineros, and the United Steel Workers (USW) signed an agreement to form a joint commission to look at the formation of a potential union that would represent one million workers in Mexico, the U.S., Canada and the Caribbean.

The USW has supported the strike over the years as Los Mineros came under brutal attack by Grupo Mexico and by the Mexican government. The USW represents 850,000 workers in the U.S., Canada and the Caribbean, while Los Mineros represents about 180,000 in Mexico.

The commission, which would consist of five members from each of the union’s boards, according to Mineweb, represents an exciting new chapter in international labor solidarity.

USW International President Leo Gerard said in a statement that Mexican President Felipé Calderón has “launched a reign of terror against working people.”

Gerard and Minero general secretary Napoleón Gómez Urrutia announced in a joint declaration that the two unions continue a common commitment to democracy, equality, and solidarity for working men and women throughout North America and throughout the world.”

The USW itself is involved in an 11-month strike by 3,500 members against Vale Inco, a huge Brazilian mining company in Sudbury, Canada. The action began after Vale and the USW could not agree on the payment level of a bonus attached to the nickel price, as well as pension issues.

The intended collaboration between the unions marks the first attempt to build a new international union “in response to the greater mobility and power of international capital since NAFTA and what has been called the neoliberal era of privatization and free trade,” according to Dan La Botz, a teacher, writer who lives in Cincinnati, Ohio.

If successful, the merger being explored by the USW and Los Mineros would build on the three-million-member global union called Workers Uniting, created by the 2008 trans-Atlantic merger between USW and the British union Unite, according to the USW.

As transnational corporations grow in reach and power since the North America Free Trade Agreement (NAFTA) took affect in 1994, Canadian, U.S. and Mexican unions have turned to each other for greater support.

At a tri-nation forum forum in Toronto, Canada, on June 20, unions looked at the harmful effects of the free trade agreement on labor in the three countries.

The conference was sponsored by several North American trade unions, the IMF, the International Federation of Chemical, Energy, Mine, and General Workers' Unions (ICEM), and Union Network International (UNI)

Trade union leaders from Mexico, who would have faced great risk meeting in Mexico, attended. They included Napoleón Gómez Urrutia, the exiled President of Los Mineros, Martín Esparza Flores of the Mexican Union of Electrical Workers (SME), Francisco Hernández Juárez of the Mexican Telephone Workers' Union (STRM), and others.

Meanwhile, Mexico’s National Workers Union announced they will file a complaint against the government with the International Labor Organization over the Cananea incident, which we've reported on before.

Jesus Verdugo told Frank Contreras of Al Jazeera, “if they do away with our union, that will generate a domino affect in Mexico. That will create a precedent and soon, other national labor unions will fall. That could produce another social conflict."

Owned by Grupo Mexico, the mine in Cananea is one of the world’s largest open pit copper mines. The mine once produced 40 percent of Mexico’s copper. Grupo Mexico says it lost $1.5 billion in strike-related costs. It estimates that another $100 million could be needed to make repairs.

Some believe Mexico wants to break the unions as it steps up mining activity.

The federal government took control of the mine after the union lost legal battles. The federal court ruled Grupo Mexico could fire the workers and reopen the mine.

The president of the Chamber of Mining in Mexico, Manuel Luévanos Sánchez, called on the government to come up with "complete solution to the union problems that generate a growing uncertainty in the industry and slow down investments, putting at risk thousands of sources of employment." (El Universal, Mexico, June 14; Prensa Latina, June 20), according to ww4report.

Managers of Grupo Mexico took control of the mine and had “contractors” ready to go to work. A few days after the takeover, mineworkers tried to stop contractors from going into the mine to start repairs. Two people were hurt. You can see the clashes between police and the workers here.

Mine operations director Isaac Lopez told the Milenio Diario newspaper June 14 that the mine would probably employ 800 nonunion workers in the future, including some former members of Section 65 (the union).

You can read more about the political ramifications of the strike in a comprehensive piece by David Bacon.

“The people are distressed after this long struggle,” USW organizer Manny Armento told Bacon on KPFA’s Labor Report on June 9.