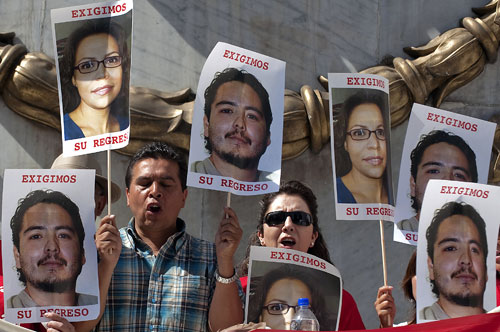 Journalists hold pictures of photographer David Cilia and journalist Erika Ramirez during a protest in Mexico City on April 29, 2010. Cilia and Ramirez disappeared when armed assailants attacked their convoy of aid groups visiting an indigenous community. The pictures read: 'We demand their return'. The two journalists survived, but nine others were not so lucky this year.   (Photo by LUIS ACOSTA/AFP/Getty Images)

The threat of death facing journalists in Mexico continues to grow.

On the heels of the murder of gubernatorial candidate and Partido Revolucionario Institucional (PRI) member Rodolfo Torre Cantú, three more high-profile killings occurred in the last few weeks. The husband-and-wife journalists Juan Francisco Rodríguez and María Elvira Hernández Galeana were killed on June 28, near Acapulco, and Hugo Alfredo Olivera was found dead in his truck on July 6 in the state of Michoacán.

This brings to nine the number of journalists who have been killed in Mexico thus far in 2010, according to the International Press Institute. Mexico is one of the world’s most dangerous counties for the media: Since 1992, according to The Committee to Protect Journalists (CPJ), 47 journalists have been killed in Mexico (including Rodriguez, Hernández and Olivera.) Nine others have disappeared.

Olivera, 27, was the owner and editor of El Día de Michoacán and the small local news service ADN. He was also the local correspondent for the daily La Voz de Michoacán, according to Reporters Without Borders. The state attorney general’s office of Michoacán state reported that the offices of El Día had been broken into and computer hard disks had been stolen.

Rodríguez and Hernández were shot at close range in an Internet café in Coyuca de Benítez, in the state of Guerrero, near Acapulco.

Rodriguez, 49, was a stringer for the newspapers El Sol de Acapulco and Diario Objetivo, and a union rep for the national Press Reporters Union. Hernandez, 36, was an editor for a weekly local publication Nueva Línea.

In February, Olivera had filed a complaint with the National Commission of Human Rights after being beat up by a federal police officer while covering a murder.

Just a few weeks before the killings, CPJ had fired off a letter to Mexican President Felipe Calderón, calling on him to bring an end to the violence against the media in Guerrero and stating that they were concerned about an increase in attacks and killings of journalists. This year, two other journalists were killed in Guerrero. Jorge Ochoa Martínez, publisher of the weekly El Oportuno and El Sol de la Costa, was shot to death. Evaristo Pacheco Solís, a reporter with Visión Informativa, was shot and killed March 12. CPJ said in its letter:

While reporters covering the drug trade are often targeted by criminal groups—which are frequently working with corrupt officials—CPJ has documented an increasing number of assaults committed by federal forces since your administration deployed thousands of troops and federal police to combat organized crime in December 2006.

More than 30 reporters and media workers have been killed or disappeared since you took office three and a half years ago.

According to various news reports and to one of the union representatives monitoring the investigation, just a few hours before his murder, Rodriguez had covered a demonstration marking the 15th anniversary of the Massacre of Aguas Blancas. The 1995 massacre took place when state police murdered 17 peasants marching for their rights.

While a state prosecutor says the two were killed in a suspected robbery, local journalists are skeptical.

The endless wave of violence in Guerrero is thwarting news coverage and causing widespread self-censorship. We urge federal and state authorities to guarantee that all Guerrero journalists can work without fear of retribution.

Rodriguez had recently condemned the harassment of journalists in the state of Guerrero.

“Democracy in Mourning,” an article by Freedom of Expression in Ciudad Tijuana, said the attacks threaten to transform Mexico into an uninformed country, one without voice and at the mercy of powerful forces. It called it a blow to fundamental human rights.

Irina Bokova, director-general of the UN Educational, Scientific and Cultural Organization (UNESCO), condemned the murders, saying "these crimes must not go unpunished."