How Unions Will Decide Who To Back in 2020

This primary season, unions are refusing to rush their endorsements.

How Unions Will Decide Who To Back in 2020

This primary season, unions are refusing to rush their endorsements.

After 2016 left major unions bruised and battered from their early endorsements of Hillary Clinton (angering rank-and-filers who said their unions never gave Bernie Sanders the chance he deserved), don’t expect to see any endorsements from the likes of AFT, AFSCME, SEIU, NEA or CWA until late 2019—that is, until they’ve had a chance to hold lots of town halls and candidate forums. A few unions, in a first for them, are even asking their members for an endorsement vote.

The leaders of the American Federation of Teachers endorsed Clinton in July 2015, but this year unveiled a new endorsement process that requires candidates to first attend an AFT town hall. Though the AFT says it is collecting more member input than in the past (through its town halls and social media), its executive council will ultimately still choose the union’s candidate. 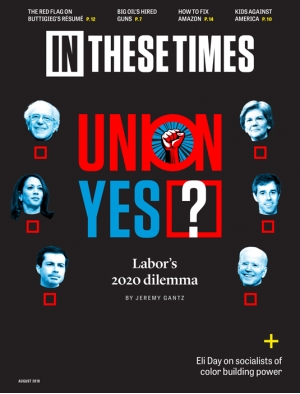 “I’m hoping that the [endorsement] process is viewed credibly by the vast majority of our membership, that they will be involved and engaged,” says Randi Weingarten, president of the AFT.

The National Union of Healthcare Workers, a 15,000-member California union that endorsed Sanders for 2016, is also trying direct voting for the first time. Members will rank their top choices after a two-day town hall in September—with NUHW’s executive board simply rubber stamping the winner. “Revitalizing the labor movement is all about empowering workers in a democratic way to make decisions about their union,” President Sal Rosselli says.

Jane McAlevey, a former union organizer and author of No Shortcuts: Organizing for Power in the New Gilded Age, says conversations with thousands of workers have convinced her that most want to be part of a fighting union that can win fundamental improvements for them. Unions have tended not to nurture that instinct, she says, instead hiring polling firms to “check in” on members.

Jeremy Gantz is a contributing editor at the magazine. He is the editor of The Age of Inequality: Corporate America’s War on Working People (2017, Verso), and was the Web/Associate Editor of  In These Times from 2008 to 2012.