Neither is a silver bullet, but they can help us tackle inequality and climate change.

An original Work Projects Administration sign from the 1930's. (Photo by Dovate)

Neither is a silver bullet, but they can help us tackle inequality and climate change.

An original Work Projects Administration sign from the 1930's. (Photo by Dovate)

The argument about a universal basic income (UBI) versus a job guarantee (JG) has become one of the liveliest and most contentious debates on the Left. Each has been touted as a solution to all ills: the way to decrease depression, close the racial wealth gap, recognize historically undervalued forms of work, transform the economy, save the planet.

Though UBI and JG are typically counterposed, it’s entirely plausible they could coexist. If paid work is as important to well-being as JG advocates say, most people would want a job even with UBI. In particular, the black freedom movement, from civil rights leaders to Black Lives Matter, has called for both a basic income and guaranteed jobs.

Whether both can do all the things proponents promise—in particular, the essential work of transitioning quickly to a low-carbon economy—is a different, harder question. Whether it’s possible to achieve both is yet another. 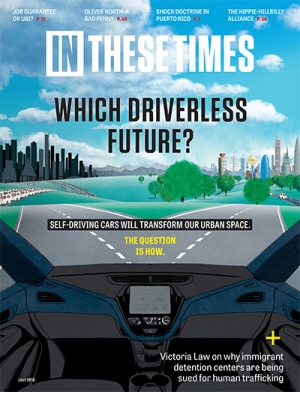 A UBI program could actually be a danger to the climate if, in distributing revenue from publicly owned resources, we rely on profits from destructive industries such as oil, as in Alaska. But there are alternatives: a depletion tax on companies that degrade so-called natural capital, a tax on carbon and other pollutants, or a land value tax targeting large landowners—all of which foster environmental conservation and make public claims to natural wealth.

I initially supported UBI because separating livelihoods from jobs is important, not only for human wellbeing but for breaking an environmentally destructive growth cycle. That’s where many JG proposals make me nervous. I have yet to see a JG proposal that doesn’t promise, at least tangentially, to increase growth and productivity. A proposal published by the Center on Budget and Policy Priorities, for example, suggests a JG would produce “increases in the growth rate of GDP, and substantial productivity and capacity gains.” But not all such gains are desirable. We ought to crowd out the many jobs that are actively harmful to people, society and the environment, whether in fast fashion or Amazon warehouses.

Raúl and Rohan agree that we should work less in general, and it’s possible to build work reduction into a JG program. But the valorization of work nevertheless permeates JG discourse, often framed in terms of dignity or solidarity. If the point is for everyone to contribute to necessary work in the spirit of equality and solidarity, we should be making everyone work—but no one yet has proposed drafting landlords and the idle rich to shovel compost. (I’m on board.)

It is encouraging, however, to see that many current JG advocates are thinking about what constitutes low-carbon, socially beneficial work. Economists Stephanie Kelton and Pavlina Tcherneva have both called for a JG oriented around care: for people, for the planet and for communities. Important questions remain. Could parents get “jobs” caring for their children? Could friends get jobs caring for one another? Yet the move to put care work at the heart of a climate program is important. We need to move away from the work of resource-intensive consumer goods toward the work of bettering lives, planting trees, constructing playgrounds, making art.

Perhaps most promising is the combination of a JG and universal basic services: free and publicly provided housing, transportation, internet access, education, healthcare and other necessities. Dense housing and public transportation are particularly crucial to reducing carbon emissions in a just way.

If that sounds too good to be true, that’s where politics comes in. The most significant political challenge for both policies, of course, is that private employers don’t want people to have alternatives to bad jobs. Realistically, the Left doesn’t have the power to win both a UBI and a JG in the immediate future—particularly at a time when unemployment is relatively low, even if bad jobs are rampant. So we need to be alert to the challenges of actually passing something, and to how our ideal policies might be distorted in the process.

I’ve grown more wary of a UBI as it’s increasingly championed by tech scions who see it as a way to throw crumbs to workers replaced by robots. That version of UBI, which would replace social services with lump sums of cash, isn’t what I want— but of late it’s been the one with more momentum. Similarly, while left-wing JG programs aren’t workfare, we need to be careful not to reinforce the idea that people only matter if they work enough, as the Right tries to impose work requirements on food stamps and other assistance programs.

My hunch is that the JG-UBI debate has become so loaded in part because passing any left-ish legislation seems hard enough right now—so people want a policy that can do as much as possible all at once. (I’ve been guilty of this myself!) But we don’t need a single silver bullet: We need a strong Left movement. The most important problem isn’t which policy looks best in the abstract, but how we build a political force capable of winning a decent version of either in the short term, and then building on it over time.

Left-liberal energy is gathering around a JG, as witnessed in recent proposals from Bernie Sanders and Cory Booker. That’s reason enough for me to get behind it, too, and to push hard for a program that will support the kinds of work, from solar panel installation to wetland restoration to elder care, that are absolutely crucial to our survival. It’s also why I’ve spent more time discussing it here. Yet, I will continue to insist that everyone has a right to a decent life whether or not they have a job, that human dignity does not depend on paid employment, that perpetual growth is not the way to prosperity, and that everyone should benefit from shared wealth and our shared planet. I hope the Left can keep both ideas in mind at once.

Previously:
Do We Need a Federal Jobs Guarantee?

Do We Need a Universal Basic Income?

Alyssa Battistoni is a doctoral candidate in political theory at Yale and an associate faculty member at the Brooklyn Institute for Social Research. Her writing has appeared in Dissent, n+1 and Jacobin, where she is on the editorial board.