There is a museum at the former site of the Gestapo headquarters in Berlin. It is searing and frank: a history of the relationship of the Nazi party and the people of Berlin, telling a story of the way ordinary Germans made Hitler’s rise possible. Berliners flock to it. When I visited, the line of people shuffling past the informational panels was three or four deep, everyone meditating on this awful indictment of their grandparents’ generation.

There may be such museums in the United States, but I’ve never seen one. I’m more familiar with museums like the one memorializing the bombing of the Murrah Federal Building in Oklahoma City, where two domestic terrorists who despised the U.S. federal government killed 168 people, including 19 children in daycare. Unlike the museum in Berlin, the Oklahoma City museum is meant to be uplifting: Heroic first responders rush toward the explosion. A doctor performs makeshift surgery with a pocket knife. Around one corner, an authentic pile of rubble betokening the awesome power of the blast. Around the next, a miracle—the Bible that emerged unscathed.

Other sections narrate a thrilling police procedural: the truck axle thrown three blocks clear of the blast, whose miniscule identification number allowed intrepid investigators to uncover where Timothy McVeigh had rented the truck he turned into a bomb. The officer who, in an extraordinary coincidence, pulled over the getaway car because of its missing license plate and apprehended the sullen young man in the “Sic Semper Tyrannis” T-shirt. The arrest, the trial—justice.

Of course, the museum also tells the story of how Oklahoma “came together.” It almost frames bombing as a blessing. “Caring Communities Provide Safe Havens,” one panel read, above a picture of a church.

I saw the word “terrorism” only once, in a self-congratulatory text about how initial suspicions of “Muslim terrorists” were overcome, fair-minded Americans turning their rage on a corn-fed American boy instead: another blessing, this opportunity to prove that America was not racist. There was no mention of right-wing talk-radio host G. Gordon Liddy advising his listeners the previous year to confront agents of the Bureau of Alcohol, Tobacco and Fireams: “Go for a head shot; they’re going to be wearing bulletproof vests.” Or Newt Gingrich’s Republican revolutionaries taking over Congress via rhetoric depicting the federal government as an alien occupying army. Or Jesse Helms informing President Bill Clinton that if he visited North Carolina, he should bring bodyguards.

A political cartoon on display depicted someone asking, “How many hurt?” The answer: “260 million Americans”—the entire U.S. population at the time. The implication, of course, is that no one except four people—one duly executed by lethal injection, another in jail for the rest of his life, a third sentenced to 12 years and a fourth granted immunity—had anything to do with creating the political context of antigovernment rage that made the bombing possible.

This denial is how a childlike nation gets past trauma. It demonstrates how unprepared our nation is for the trauma about to be visited upon it.

Donald Trump made scores of promises that he not only will not fulfill but, with ontological certainty, cannot fulfill. To take one small example, he told an audience that he would grow jobs in the coal industry, and also jobs in the fracking industry. Never mind that these two goals are opposed—if America consumes more coal, it will require less fracked natural gas, and vice versa.

Then there is Trump’s promise to restore the easy prosperity of America’s mythic mid-century past, and his ur-promise, the fascist one: ethnic cleansing and the ushering in of boundless national glory. When these things do not appear—when, instead, his rise ushers in global financial panic and geostrategic chaos—his worshipful admirers are unlikely to blame him, let alone themselves. They learned from watching The Apprentice that “Mr. Trump” is all-knowing and omni-competent, and will blame those whom Mr. Trump instructs them to blame: The quislings in the media. The (Jewish) financiers. The immigrants. The Muslims. The liberals. The “Republican establishment.” Nasty women. A spiral of violent recrimination may well ensue; rinse, lather, repeat.

Enduring and resisting this onslaught will be traumatic. We will need unflinching assessments of exactly what it is we are going through. But our nation, indoctrinated into an Oklahoma City-museum conception of trauma and healing, is woefully unprepared. And our mainstream media is the most unprepared of all.

Years ago, amidst President George W. Bush’s worst depredations of the rule of law, I used to fantasize about confronting mainstream media sachems with a thought experiment: Imagine you are a commentator in Weimar Germany. A dynamic new political party comes on the scene. They pursue their goals via means that are, shall we say, extra-parliamentary. Their leader’s book promises that he alone can fix the nation’s problems. And that the fault lies not in ourselves, but in our resident aliens.

At what point, I wanted to ask, would you consider it your moral duty to break from the settled routines of “fairness” and “objectivity”—gotta hear both sides!—to inform your audience that what was going on was not normal?

During Bush’s terms, my daydream felt a little unfair and over the top. No longer.

On election night, I heard commentator after commentator on NBC talk about this like any other election: Whether Trump could reach across the aisle. How he would staff his transition. Whether Democrats could “cut deals” with him. And, yes, how it all could be explained because, after eight years of a Democratic president, the nation simply wanted “change.”

The week before, a reporter from USA Today called to ask for historical examples that could inform our quest to heal and unite the country after a divisive campaign. When I responded that adults understand that true healing only happens when a problem is forthrightly acknowledged, that working through our divisions means we should confront our trauma before coming out the other side. His response suggested a sci-fi robot: That does not compute! He asked me to re-explain my answer, as if he had never heard such a strange thing.

For this is not how mainstream media professionals are trained to think. They think like those museologists in Oklahoma City. Americans “come together.” Consensus is in our DNA. Here, ugly things, racist things, violent things, sexist things, are epiphenomenal.

We’ve always been this way: Even in 1836, when America’s crisis over slavery was bringing the country closer and closer to civil war, Congress’s response was to outlaw any debate over slavery in Congress. Southern slaveholders pushed it, but I bet respectable Whigs welcomed it. So much less unpleasantness if you pretend a crisis doesn’t exist.

What about our Democratic politicians? Some get it. Russ Feingold, conceding his loss to Wisconsin incumbent Sen. Ron Johnson, began routinely, apologizing for not getting the job done, thanking his wife, his supporters, his staff—and then: “But obviously something is happening in this country tonight. I don’t understand it completely. I don’t think anyone does.”

This was exactly the right tone. If you are not acknowledging a feeling of being at sea following Nov. 8, 2016, you’re simply not being authentic.

Hillary Clinton, however, took the Oklahoma City-museum route in her concession. She smiled and smiled. She praised the “rowdy” crowd, blurted the customary thank-yous and I-love-yous. She acknowledged that the loss was painful—“and it will be for a long time.” But it sounded no more solemn than a typical concession speech by a failed candidate for a backbench congressional seat.

There were feints at Trump, to be sure, who she hopes “will be a successful president for all Americans” and will defend “the rule of law, the principle that we are all equal in rights and dignity, the freedom of worship and expression.” But there was certainly no sense of civic emergency. No markers laid down that a presidency won with a minority of the votes—along with massive voter suppression—must be circumspect in the mandate it claims. Most definitely nothing to make Donald Trump sit bolt upright and contemplate that the people who actually believe in the rule of law might represent roadblocks in his path.

No, just boilerplate: “We owe him an open mind and a chance to lead. Our constitutional democracy enshrines the peaceful transfer of power. And we don’t just respect that. We cherish it.”

Maybe that was all she could say: hate the game, not the player. Maybe she felt she had to “calm the markets.” Well, here is one way the markets responded: Traders at the New York Stock Exchange chanted, “Lock her up.”

Now comes the test of our institutions: the bulwarks that outlast elections, meant to stand between strongmen, mobs and their awful instincts. How will they fare? Once more, indications are not encouraging. The FBI, for example, put its thumb on the scales for the victor. Police unions chose to endorse a proud and open lawbreaker. And from the evidence of Clinton’s concession speech, those atop the commanding heights of the Democratic Party clearly lack the will for the heroic fight ahead to resist the lawless madman who commands the executive branch.

Who will lead the resistance? More fundamentally: Can a nation that cannot acknowledge genuine trauma even resist? Rick Perlstein is the author of The Invisible Bridge: The Fall of Nixon and the Rise of Reagan (2014), Nixonland: The Rise of a President and the Fracturing of America (2008), a New York Times bestseller picked as one of the best nonfiction books of the year by over a dozen publications, and Before the Storm: Barry Goldwater and the Unmaking of the American Consensus, winner of the 2001 Los Angeles Times Book Award for history. 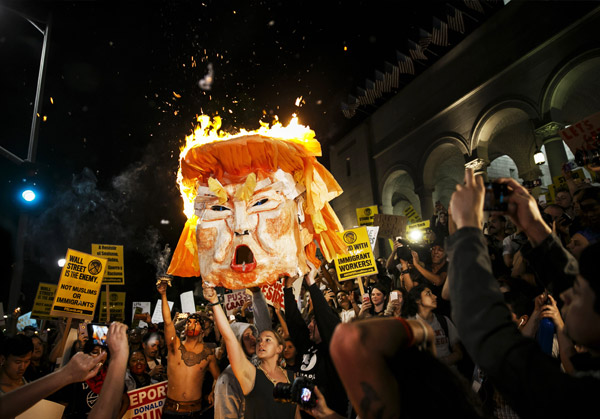 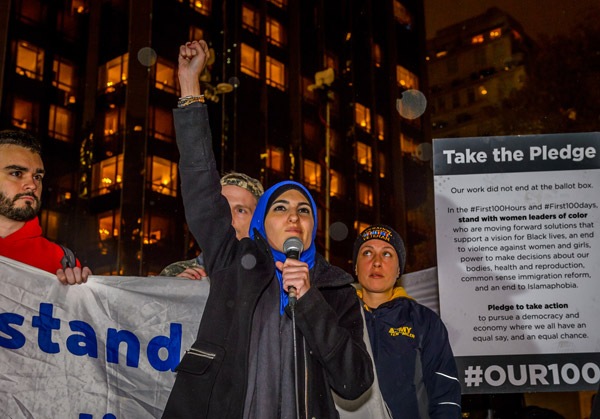 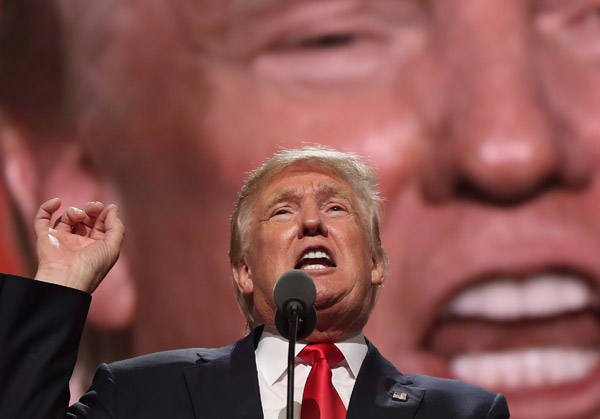