How Corporate Media Threatens Our Democracy

This is a crisis we can no longer afford to ignore.

Media shapes our very lives. It tells us what products we need to buy and, by the quantity and nature of coverage, what is “important” and what is “unimportant.” Media informs us as to the scope of what is “realistic” and “possible.”

When we see constant coverage of murders and brutality on television, corporate media is telling us that crime and violence are important issues that we should be concerned about. When there is round-the-clock coverage of the Super Bowl, we are being informed that football and the NFL deserve our rapt attention. When there is very little coverage of the suffering of the 43 million Americans living in poverty, or the thousands of Americans without health insurance who die each year because they can’t get to a doctor when they should, corporately owned media is telling us that these are not issues of major concern. For years, major crises like climate change, the impact of trade agreements on our economy, the role of big money in politics and youth unemployment have received scant media coverage. Trade union leaders, environmentalists, low-income activists, people prepared to challenge the corporate ideology, rarely appear on our TV screens.

As a general rule of thumb, the more important the issue is to large numbers of working people, the less interesting it is to corporate media. The less significant it is to ordinary people, the more attention the media pays. Further, issues being pushed by the top 1 percent get a lot of attention. Issues advocated by representatives of working families, not so much.

For the corporate media, the real issues facing the American people— poverty, the decline of the middle class, income and wealth inequality, trade, healthcare, climate change, etc.—are fairly irrelevant. For them, politics is largely presented as entertainment. With some notable exceptions, reporters are trained to see a campaign as if it were a game show, a baseball game, a soap opera, or a series of conflicts.

I saw this time and time again.

Turn on CNN or other networks covering politics and what you will find is that the overwhelming amount of coverage is dedicated to personality, gossip, campaign strategy, scandals, conflicts, polls and who appears to be winning or losing, fundraising, the ups and downs of the campaign trail, and the dumb things a candidate may say or do. It has very little to do with the needs of the American people and the ideas or programs a candidate offers to address the problems facing the country.

According to a study of media coverage of the 2016 primaries by the Shorenstein Center on Media, Politics and Public Policy, only 11 percent of coverage focused on candidates’ policy positions, leadership abilities and professional histories. My personal sense is that number is much too high.

The “politics as entertainment” approach works very well for someone like Donald Trump, an experienced entertainer. That kind of media approach didn’t work so well for a campaign like ours, which was determined to focus on the real problems facing our country and what the solutions might be. For the corporate media, name-calling and personal attacks are easy to cover, and what it prefers to cover.

While I was still considering whether or not to run, I did a long interview with a very prominent national newspaper writer. Over and over I stressed that I wanted to talk about my assessment of the major problems facing the country, and how I proposed to address them. And for 45 minutes, that’s what the discussion was about. The reporter appeared interested in what I had to say, and I thought we had a good conversation. At the very end, as he was leaving, he said: “Oh, by the way, Hillary Clinton said such and such. What’s your comment?” I fell for it. Needless to say, that one-minute response became the major part of his story. And that occurred time after time after time.

On a CNN show, an interviewer became visibly angry because I chose not to respond to her questions with personal attacks against Secretary Clinton. The interviewer opined that I didn’t have “sharp enough elbows” to become a serious candidate, that I wasn’t tough enough. Identifying the major problems facing our country, and providing ideas as to how we could address them, was just not good enough.

In fact, I was gently faulted by some for having excessive “message discipline,” for spending too much time discussing real issues. Boring. The result of all of these factors is that while I was getting coverage, it was far less than what other candidates were getting.

In his article, Boehlert also reported that:

Trump has received more network coverage than all the Democratic candidates combined.

On May 25, 2016, Media Matters for America discussed the coverage of poverty issues on the major television networks for the first quarter of 2016:

What does it say about corporate media coverage of the major issues facing our country when my candidacy, alone, accounted for the majority of attention (limited though it may have been) that network Sunday news shows paid to poverty?

I remember cringing when the car I was traveling in was pulled over in Iowa because we were speeding to an event, with a New York Times reporter in the back seat. The state trooper was professional and polite and gave us a warning. Not so the reporter, who, it goes without saying, made it a major part of her coverage.

Donald Trump on television screens in the media center during the third presidential debate in Las Vegas, Nevada. (Photo by Justin Sullivan/Getty Images)

Why is it that the mainstream media sees politics as entertainment, and largely ignores the major crises facing our country? The answer lies in the fact that corporate media is owned by, well, large multinational corporations.

These powerful corporations also have an agenda, and it would be naive not to believe that their views and needs impact coverage of issues important to them. Seen any specials lately as to why we pay the highest prices in the world for our prescription drugs, or why we are the only major country on earth not to have a national health care program? That may have something to do with the hundreds of millions of dollars each year that drug companies and insurance companies spend on advertising.

And let us also not forget that the leading personalities we see on television are themselves, in most cases, multimillionaires with very generous contracts. That does not make them evil or bad people. It just makes them very wealthy, corporate employees who bring to their jobs the perspective that very wealthy corporate employees bring.

Disney, the owner of ABC, has many thousands of employees in China manufacturing their products at very low wages. In the United States, they have utilized guest worker programs to fire Americans and replace them with low-wage foreign workers. Further, despite making huge profits, they pay the people who work at their theme parks here very low wages. I could be wrong, but I don’t expect that you will see programming tonight on ABC discussing the plight of low-wage workers here in the United States or, for that matter, in China.

Let me also give a shout-out to people who, with resources far more limited than their corporate competitors, try to inform the American people about the real issues facing our country. We received very fair coverage from Thom Hartmann, Cenk Uygur of

Bernie Sanders surrounded by media in the spin room at the first Democratic Presidential Debate. (Photo by Ted Soqui/Corbis via Getty Images)

In my campaign for president, I received 46 percent of the pledged delegates, won twenty-two states, and lost some states by a few votes. In other words, we had a significant amount of support from ordinary people. On the other hand, I did not win 46 percent of the endorsements from the print establishment and the leading newspapers in the country. In fact, I won virtually none. In almost every state, the owners of the establishment newspapers supported Secretary Clinton.

Who owns the media?

No sane person denies that the media plays an enormously important role in shaping public consciousness and determining political outcomes. The current media situation is a very serious threat to our democracy.

The very first amendment to our Constitution guarantees freedom of speech and freedom of the press, the right of the people to express their points of view from the rooftops, to allow themselves to be heard. That is something I passionately believe in.

Unfortunately, as A. J. Liebling wrote back in 1960: “Freedom of the press is guaranteed only to those who own one.” And the people who own the press, radio and television stations, and book publishing and movie companies are becoming fewer and fewer, with more and more power. This is a crisis that can no longer be ignored.

From the February 2017 Issue 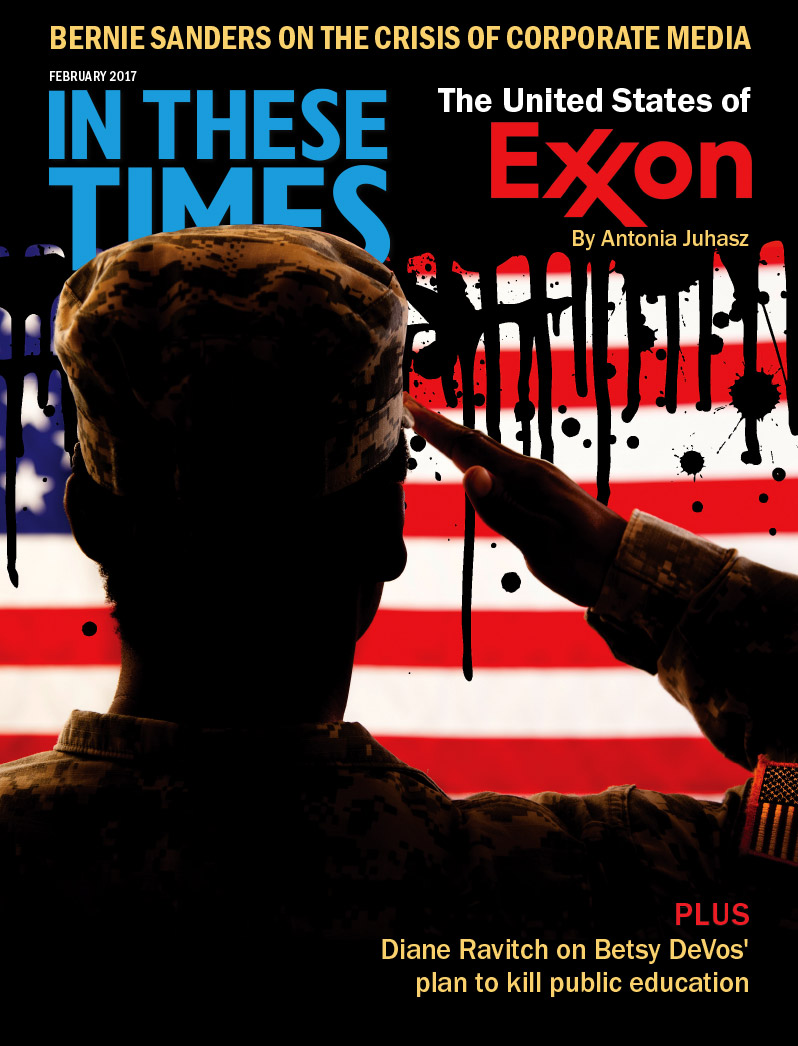 From Our Revolution: A Future to Believe In by Bernie Sanders. Copyright © 2016 by the author and reprinted by permission of Thomas Dunne Books, an imprint of St. Martin’s Press, LLC.

Bernie Sanders, the Independent senator from Vermont, has been featured in In These Times—as both an essayist and as the subject of articles—since March 1981, when he was elected mayor of Burlington.

Want more independent news and analysis? Subscribe to the free In These Times weekly newsletter: