A Century Later, New York Activists Honor the Descendants of Those Displaced by Ashokan Reservoir 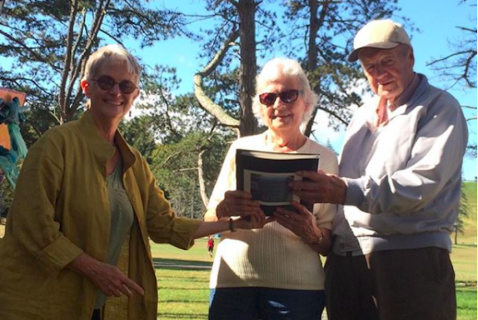 Polly Howells of Radical Joy for Hard Times presents a book of photos to Florence Giuliano and Sheldon Boice, descendants of two of the families which lost their land and homes when the Catskills reservoirs were constructed.   (Image: @catskillswater / Instagram)

On an October weekend in 1917, New York City scheduled an event to celebrate the arrival of drinking water to all five boroughs from the Ashokan Reservoir—15,000 schoolchildren lined up in Central Park to watch a pageant dubbed “The Good Gift of Water.” The program honored “Chief Ashokan,” although we don’t know if there was such a person. On the day of the pageant, the skies opened up, and pouring rain caused the cancellation of the event.

“They honored Native Americans in a sentimental way,” says environmental activist Polly Howells. “But they had no intention of honoring the people who lost their homes when their land was flooded to form the reservoir. We’re trying to undo that legacy.”

As officials were contemplating a celebration of the reservoir’s 100th anniversary, Howells helped organize “Raise a Glass to the Catskills,” in which New York City residents were photographed raising a glass of city water in gratitude to the upstate communities, where the trauma of displacement is still felt. On Oct. 14, 2017 at the Ashokan Reservoir, Howells presented a book of the photographs to Sheldon Boice and Florence Giuliano, two descendants of families who had to move to make way for the reservoir.

“Many of the descendants feel their families have been forgotten,” says Helen Chase, president of the Olive Historical Society, which hosts an annual picnic for descendants of early town residents. “The city paid them for the land, but they lost farms and community connections, and you can’t pay for those.”

“They were living on fertile river-bottom land,” says Howells, “with orchards and farms, and then they had to move up to this rocky land.”

“On the other hand,” says Chase, “the reservoir is a beautiful resource, and they kept the area from getting overdeveloped.”

The “Raise the Glass” concept came from Radical Joy for Hard Times, a worldwide network of people whose mission is to find and create beauty in wounded parts of the earth. Founder Trebbe Johnson lives in Pennsylvania, in fracking country, and works as a wilderness guide. Since the group’s founding in 2009, members gather on the summer solstice for a Global Earth Exchange, taking a meditative walk at a place that has been damaged and sharing stories of the feelings that come up. Then they make a piece of art out of found objects from nature and leave it there, creating something beautiful as a gift for the earth. The group’s healing activities have included singing and dancing at mines and fracking sites in the United States; lying on the ground in a human wreath on a monoculture farm in Germany; creating a permaculture garden in Afghanistan in response to a terrorist attack.

Howells, a participant in Woodstock Transition, Pachamama Alliance, and Bioneers, is on Rad Joy’s board of directors—called by members a “band”—that meets annually at her home in Glenford, N.Y. For the 2015 Earth Exchange, the band took a walk along the reservoir. Howells recalls a member talking about “how eerie it was, that beautiful water over there, but unapproachable and strangely dead, holding within it the ghosts of flooded towns and fields and apple orchards. She said there ought to be a Water Appreciation Day, when the people of New York City honor the folks up here who gave up so much so that they could have clean water.”

This observation led to the idea of “Raise a Glass.” Rad Joy members walked around Central Park in Manhattan with water and drinking glasses, asking people if they knew where their water came from. Some did, while others were amazed to find out their water travels through 100 miles of pipe, taking a year for a drop of water, propelled only by gravity, to go from the reservoir to the city. A couple of old-timers insisted they never drink bottled water, one of them stating, “New York City has the best water in the world.” The people were photographed raising a toast to the upstate communities.

Rachel Marco-Havens compiled the photos into a book, for printing by an online service. The presentation of the book was coordinated with a new performance by Arm of the Sea Theater, “The City that Drinks the Mountain Sky, Part 2.” The play is an updating of the theater group’s piece about the development of the Catskill water supply, a show that has been seen by hundreds of thousands of people since it was first produced in 1999 with a watershed education grant from Catskill Watershed Corporation (CWC). Using giant masks, puppets, and original music, the play shows the effects of displacement on a farm family as the reservoir was created. Diane Galusha, communications director of CWC, worked with Rad Joy and Arm of the Sea to present the show at the reservoir to an audience of about 75 people.

“Water rolling off the side of Slide Mountain has been filling glasses and toilets and fire hoses in New York City for a century,” says Galusha. “It’s a gift that goes unnoticed most of the time. Saying thank you every hundred years—to the mountain, to the people who were displaced, to the workers who lost their lives, and to the city agencies who created the system and continue to deliver water to millions every day—is the least New Yorkers can do.”

After giving the book to descendant Giuliano, Rad Joy founder Johnson asked her whether the gesture makes a difference to families who still remember the trauma of the past. Giuliano replied, “I think it does.”
("Showing Gratitude" originally appeared in the Woodstock Times—a small weekly newspaper in New York's Hudson Valley—and is reposted on Rural America In These Times with permission from the author.)
Follow @RuralAmericaITT