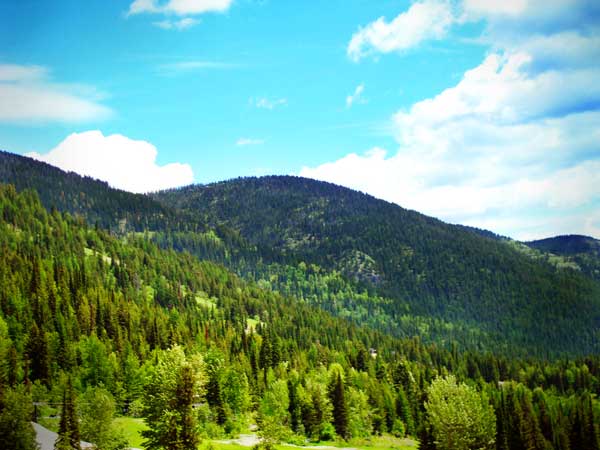 Hate in the Last Best Place

Nazis, ‘patriots’ and the Moral Majority take refuge in Montana.

In November, Flathead voters elected a tea partier to a state House seat who wore a Confederate flag jacket to a Memorial Day parade and who says the Civil War was a battle over states’ rights.

For 35 years, Chuck Baldwin preached paranoia and prejudice from his Crossroad Baptist Church in Pensacola, Fla. It seemed like a heavenly match of man and city. The one-time chairman of Florida Moral Majority pontificated on the evils of the federal government and abortion in the very burg where two doctors who performed abortions were murdered one year apart. Pensacola also was the home of the anti-evolution Dinosaur Adventure Land– “where the Bible and dinosaurs meet.” Its creator reviled the U.S. government and is now in prison for tax fraud.

It was while in Pensacola in 2008 that Baldwin, 59, ran for president on the ticket of the anti-abortion, anti-gay marriage, anti-federal government Constitution Party. But apparently the town was too tepid. In September, Baldwin announced that he and 16 members of his extended family–“like modern-day Pilgrims”–were lighting out for Montana.

“God has led us to the conviction that Montana (along with other Mountain states) is going to be the tip of the spear in the freedom fight; and we believe God wants us to be part of that fight,” Baldwin wrote.

Montana has the highest concentration of hate groups in the nation, according to the Southern Poverty Law Center. If Montana is the center of the hate group belt, then the Flathead Valley is its buckle. This long sliver of scenic land near Glacier National Park, in the state’s northwest corner, is where Baldwin, along with vociferous neo-Nazis, white nationalists and antigovernment zealots, has settled.

One Flathead resident is Stewart Rhodes, a lawyer and founder of Oath Keepers, a national conspiracy-minded organization composed of veterans, active-duty military and law enforcement officers. Last summer, in Bozeman, Mt., Oath Keepers hosted the “world premiere” of the documentary Cultural Marxism: The Corruption of America.

Another resident of the valley is antigovernment zealot Randy Weaver, a longtime hero of the “patriot” movement. After Weaver refused to appear in court on weapons charges in 1989, U.S. marshals visited his remote property in Ruby Ridge, Idaho, unannounced. Weaver’s dog, son and wife were killed in ensuing shootouts.

More recently, former militia leader David Burgert is alleged to have fired shots at sheriff’s deputies on June 12 on a logging road in a national forest. He has been a fugitive since. Burgert spent eight years in prison on weapons charges before being released in 2010. On June 18, a “patriot group” that Burgert belonged to called Flathead Liberty Bell held a ”Preparedness Expo” near Kalispell, Flathead Valley’s largest city, that offered workshops on various survival skills. Speakers at the expo included Chuck Baldwin and Stewart Rhodes.

Then there is April Gaede, the mother of twin girls who used to comprise a neo-Nazi singing duo called Prussian Blue. (In a 2004 interview with Vice magazine, the twins explained that their name derives in part from “the lack of ‘Prussian Blue’ coloring [Zyklon B residue] in the so-called gas chambers in the concentration camps.”)

Karl Gharst lives in the valley too. In 2003, as a member of the neo-Nazi Aryan Nations, he ran in vain for city council in Hayden, Idaho. A year later, he pleaded guilty to charges stemming from his threatening a social worker (whom he called a “greasy, turd-colored mongrel”).

Another local neo-Nazi is Craig Cobb, founder of a defunct video-sharing website that featured graphic videos of Asian and African immigrants being bludgeoned and decapitated in Russia. He was banished from Estonia and fled Canada because of his activities.

“There’s been a tremendous upswing in white supremacist activity in the Flathead area over the past two years,” says Travis McAdam, executive director of the Montana Human Rights Network.

The neo-Nazis, however, are few and at odds with each other. Baldwin, on the other hand, is a national figure in “patriot” circles. He’s a prolific writer with a radio show and website who describes abortion as “America’s national holocaust.” He’s pro-gun. He believes there is a conspiracy to surrender U.S. sovereignty to the New World Order. Islam is a “bloody, murderous religion.” The United Nations? “A sinister organization.” The CIA killing of Osama bin Laden? Probably a bin Laden look-alike.

“I have no idea why he settled here,” says James Conner, a Flathead resident for more than 30 years who writes a political blog about the area. “Perhaps he sought a cooler climate and a whiter population. His presence here reinforces attitudes that already exist. I think it’s too early to know what he’s going to do.”

Baldwin gave hints one January night in Kalispell when more than 200 braved frigid weather to hear him rail about “the terrorists of Washington, D.C.” He added, “We know there’s a fight coming. The good ground is right here in Montana and we want to be in the right place.”

He also declared he wanted to be governor–a prospect he says is “so thrilling I just get goose bumps.”

The pugnacious pastor was a hit. April Gaede gushed on Stormfront.org that Baldwin “is one of the best speakers that I have heard in person.” She invited fellow racists to move to the Kalispell area, even posting links to job sites.

A bastion of the antigovernment and anti-Semitic Posse Comitatus in the ’80s, Montana is also home to an octogenarian, Jew-hating, anti-tax rebel named Red Beckman, sometimes called the “Father of the Patriot Movement.” Another antigovernment group, the Montana Freemen, engaged FBI agents in an 81-day standoff in 1996, and several of its members were imprisoned. The Freemen are gone, but the Militia of Montana, formed in 1994, is still around, and still obsessed with conspiracies.

More recently, the state has seen a resurrection of the neo-Nazi Creativity Movement, and the emergence of particularly virulent Tea Parties. Rim Ravndal, the president of the Big Sky Tea Party Association, was removed last year after he had a Facebook conversation about the 1998 murder of Matthew Shepard, during which he asked, “Where can I get that Wyoming printed instruction manual?”

Where the Aryans roam

Racists have long envisioned the Northwest as an idyllic future homeland for whites only. The Aryan Nations was infamously headquartered for many years in neighboring northern Idaho.

Other than the Flathead’s whiteness, part of its appeal to extremists is that they can live anonymously in a largely rural, forested area. “Even the nuts like to live in beautiful places,” Conner says.

Last year, local racist groups began reserving a room at the Kalispell library to show Holocaust denial films. In November, Flathead voters elected a Tea Partier to a state House seat who wore a Confederate flag jacket to a Memorial Day parade, and who maintains that the Civil War was fought over states’ rights, not slavery.

This year saw an apparent attempt by a right-wing cabal to wrest control of the Flathead Valley Community College Board of Trustees. One of the candidates was Tim Baldwin, a son of Chuck Baldwin. Another was an engineer and atmospheric physicist who doesn’t believe climate change is caused by humans. Another backed legislation that would give county sheriffs authority usurping that of the federal government–a concept derived from the Posse Comitatus.

Many in the county are pushing back against the extremists. At least 250 people showed up last year to protest the showing of one of those Holocaust denial films–dwarfing the number who saw it. A group was formed to combat the haters called Love Lives Here.

“That seems to be an effective response to what they’re doing,” says Will Randall, a longtime Flathead Valley resident and human rights activist. “It’s uncontroversial and nonconfrontational.”

All four of the far-right challengers in the community college board election were trounced in May, but perhaps that’s a temporary setback. Baldwin counts on help from a formidable ally: “I really believe God is doing something in the Flathead Valley!”

Larry Keller has written for the Southern Poverty Law Center’s Intelligence Report and CNN.com. See his work at larryakeller.com.